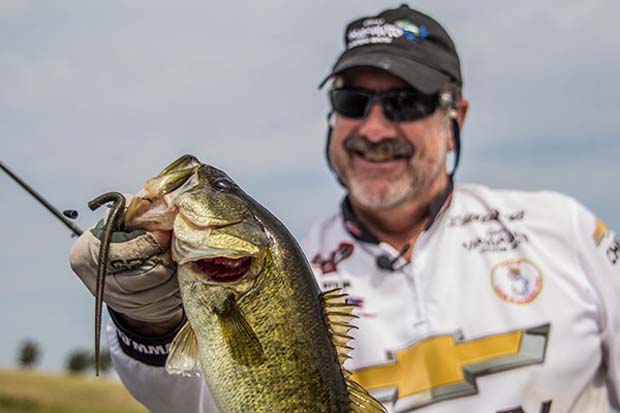 Tips & Tactics: It is the lowly worm that catches the bass

If you want to learn more about catching fish in still water or riverine habitats it would be a good idea to hang out with folks that fish with conventional gear.

Show me the worms!

[dropcap]W[/dropcap]orms are not at all sexy or found in too many fly anglers fly boxes. But a spin person will have a tackle box full of worm lures and will fish them weighted and deep, hopping and with erratic surface retrieves. Their worm “baits” will be a few inches long to several inches long and fishable in any water column. But do they catch bass, crappie and bluegill? Yes, and better than anything else according to FLW Tour pro and Bassmaster Classic champion Larry Nixon. Nixon said: “ . . . you should never overlook the effectiveness of bass fishing with plastic worms . . .  In addition, Nixon said: “It would be hard to find a tournament angler with a tackle box void of a myriad of worm lures.”

What about worms for us, fly anglers?

Well, our decided lack of interest in “worms” is probably ruined by perception, or in reality – snobbery. The vision; someone sitting in a cheap Walmart fold-up lawn chair with a well-worn, broad bimmed straw hat holding a long bamboo pole fishing worms for anything that will bite…comes to mind.

Well, here’s one that works, but never ask why. San Juan Worm fly tying video credit: In The Riffle.

The San Juan Worm has been around for decades.  It was originally developed on the San Juan River, New Mexico. The fly has spread to almost every corner of modern fly fishing.  Biologists have learned that almost every body of water holds some population of worms.

The worms are usually small, one to three inches long, and make up an important part of a fish’s diet.

You can produce a lot of simple to tie worm patterns – designed to be swum on the bottom, deep, surface drifted or fished in any water column.

Our Recipe for the San Juan Worm

Finish: With a lighter, slightly burn chenille tips so they are pointed.

NOTE 1: An exact copy of materials list is not necessary.