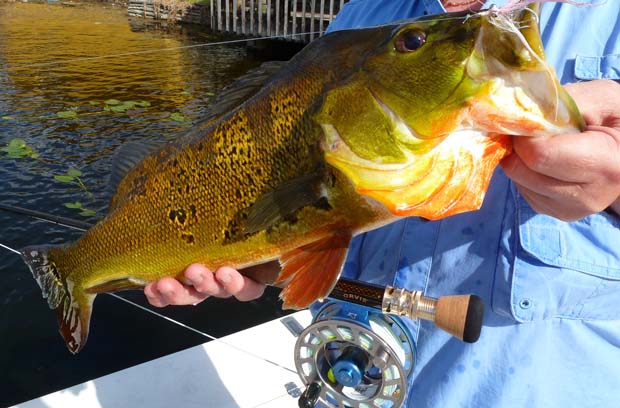 Fly Life Magazine.com NOTE: Keep this article on computer’s notebook and mark you calendar for next year. Steve Gibson is right on about the ‘Glades fishing in South Florida. Fly anglers need a fast action fly rod rather than a than a slow action rod – to increase hook-ups. You won’t need more than a 7-weight. A 7-weight better handles wind and bushy flies. All your flies MUST have weed guards. Poppers, frog and clousers patterns in various colors and sizes work well. For peacocks a white Clouser. Also, there are many walk-in opportunities, but a canoe, kayak, motorized Gheenoe or short – light flats boat would improve the fishing potential by a factor of 10X, allowing for finding fishy places and increased coverage. Recommended, a guide.

Yes, Virginia, there is fresh water in the Sunshine State. In fact, the peninsular state has several thousand lakes, rivers and ponds from which to choose, giving anglers many choices of where to go and what to target. How the exotics gained a foothill in south Florida its anyone’s guess. But folklore has it that an aquarium owner may have gotten tired of tending to his tropical fish and dumped them in the backyard pond or canal. Didn’t take long for them to take hold.

The state introduced peacock bass into the mix in 1984.

While Florida fisheries biologists understandably would rather not have the exotics, they’re here to stay. The population was severely impacted during the freeze of 2010, but has shown signs of rebounding strongly following three mild winters since.

The biologists’ problem is an angler’s dream. The exotics are plentiful, willing to cooperate and offer lots of fun. When the fishery is at its peak, it’s common to total 200 fish or more per person per day.

I run Southern Drawl Kayak Fishing in Sarasota and my clients love spending a day in The ‘Glades catching exotics.

Oscar (you’ve seen them in tropical fish stores) are gregarious, territorial and downright feisty. These members of the cichlid family are very prolific and grow up to 3 pounds or more. You can catch them on a variety of baits, lures and flies. They’re not too picky.

Oscar are structure oriented and love to hang out around rocks, grass lines, fallen trees and whatever else might be in the water. They hang out in schools, so if you find one oscar you’ll likely catch others. You’ll find Mayan cichlid in the same areas as oscar. Also known as “atomic sunfish,” these speedy fighters aren’t too particular about what they eat. You can use the same baits and lures you’d use for oscar.

Both species are good to eat. There are no size or bag limits. State biologists want anglers to keep all they want and don’t want you to release any that you catch.

Oscar just might be the hardest fighting freshwater fish for their size. They’re very strong and will attempt to get back into the structure when hooked.

You will find both species throughout south Florida, particularly within the fresh waters of Broward and Miami-Dade counties. The closest spots for me are along the state’s famed Alligator Alley (Interstate 75) which runs between Naples and Fort Lauderdale. There are a number of recreation areas along Alligator Alley that have boat ramps. Alligator Alley is about a 2 1/2-hour drive for me.

I occasionally catch butterfly peacock bass, but the best areas for those species are toward Miami. A buddy of mine, Alan Zaremba of Hollywood, is considered by many the state’s premier guide for peacock bass.

Of course, exotics are all you catch. Over the course of your day, you’ll also probably encounter largemouth bass, bluegill, warmouth perch, shellcracker, stumpknocker, gar and others.

While you can fish year round, I’ve found it best from December through April when the water level is down. Low water concentrates the fish and makes them easier to locate.

Once the rainy season (June-September) sets in, the fish are able to spread out over millions of acres. In addition, Florida’s summer heat can be brutal, thunderstorms are a daily occurrence and mosquitoes are thick.

Southern Drawl Kayak Fishing owner Steve Gibson has been fishing for 45 years and nearly 35 of those years in Florida. He received his B.A. in Journalism from Marshall University in Huntington, WV in 1971. Following his graduation, Gibson enlisted in the Air Force and served four years. He was an information specialist for the Consolidated Tactical Air Command Office of Information at Eglin Air Force Base near Valparaiso, FL. He spent his last two years as the historian of the 33rd Tactical Fighter Wing at Eglin. A professional outdoor writer and photographer, Gibson’s writing and photographs have appeared in several publications, including Florida Sportsman, Gulf Coast Angler, Fly Fishing in Salt Waters, Saltwater Fly Fishing, The Fisherman, Cabella’s Outdoor Magazine, Paddle World Magazine, Blood Knot Magazine and Florida Fishing Weekly. He also served as host of Fishing Paradise on Sarasota’s SNN6 and was host of Suncoast Outdoors on a local radio station. Steve is also the retired Outdoor Editor for the Sarasota Herald-Tribune. He is author of a blog, Gibby’s Fishing Blog at www.gibbysfishingblog.blogspot.com In addition, Gibson hosted a two-day seminar series at Robarts Arena in Sarasota , called “Go Fish! Fishing Extravaganza.” He is co-tournament director of the Sarasota Chapter of the Coastal Conservation Association’s Fall Fly Fishing Challenge and on the Board of Directors of the Florida Council of the Federation of Fly Fishers. Gibson has won many tournaments, including the Fly Fishing Division of the Sarasota Sports Fishing Anglers All-Release Tarpon Tournament, the Fly Fishing Division of the Sarasota Sports Fishing Anglers Spring Classic, Sarasota CCA All-Release Photo Challenge (snook division and spotted seatrout division), Sarasota CCA Fall Fly Fishing Classic (snook division, trout division), Fly Fishing Division of the Venice/Englewood CCA No Motor Tournament and he took first place in the Orvis Dealers Fly Fishing School Tournament in Islamorada with a 14-pound bonefish. Gibson resides in Sarasota with his wife, Kathy, their daughter, Morgan, and their Jack Russell Terrier, Jack.