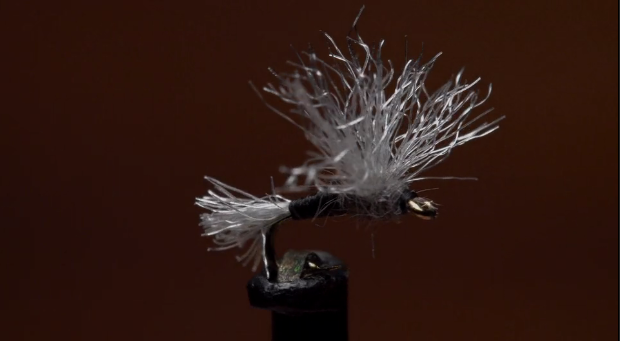 [dropcap]O[/dropcap]n occasion, we have offered up a fly tying pattern that we have not vetted – merely had good reports, but not six-pack bar talk. But from other guides (Andrew Derr, our editor, is a well-known guide in Montauk), friends we’ve known for decades in Florida, Bahamas, Adirondacks, New Zealand, outdoor travel companies, other authors, and fellow anglers. Responsible messengers.

So, today we have such a beast to offer. It’s tied by none other than Tim Flagler and he calls it “Zelon Musk Midge.”

Why did it capture our attention?

It looks like it was tied with fish offensive tying material, Zelon fibers. However, the finished fly’s voodoo is that it reportedly catches trouts.

What comes to mind?

The Kreelex Fly, of course, made famous by Chuck Kraft. It is a similarly tied fly – using a ridiculous fish scaring material familiar only to Christmas tree decorators who refer to it as “tinsel.”

The Kreelex Fly, as we all now know, is famous for inducing trout bites, some briny water pescados, and bass (the latter for which it was invented – smallmouth) worldwide.

NOTE: Zelon is a ridged, strand fiber material that tends to retain its shape when in water – doesn’t mat. Antron, with which it is occasionally mistaken, is just about the opposite in shape retention – more whippy streamer.

The negative on Zelon is that it’s only available on the West Coast, Umpqua and Blue Ribbon Flies.