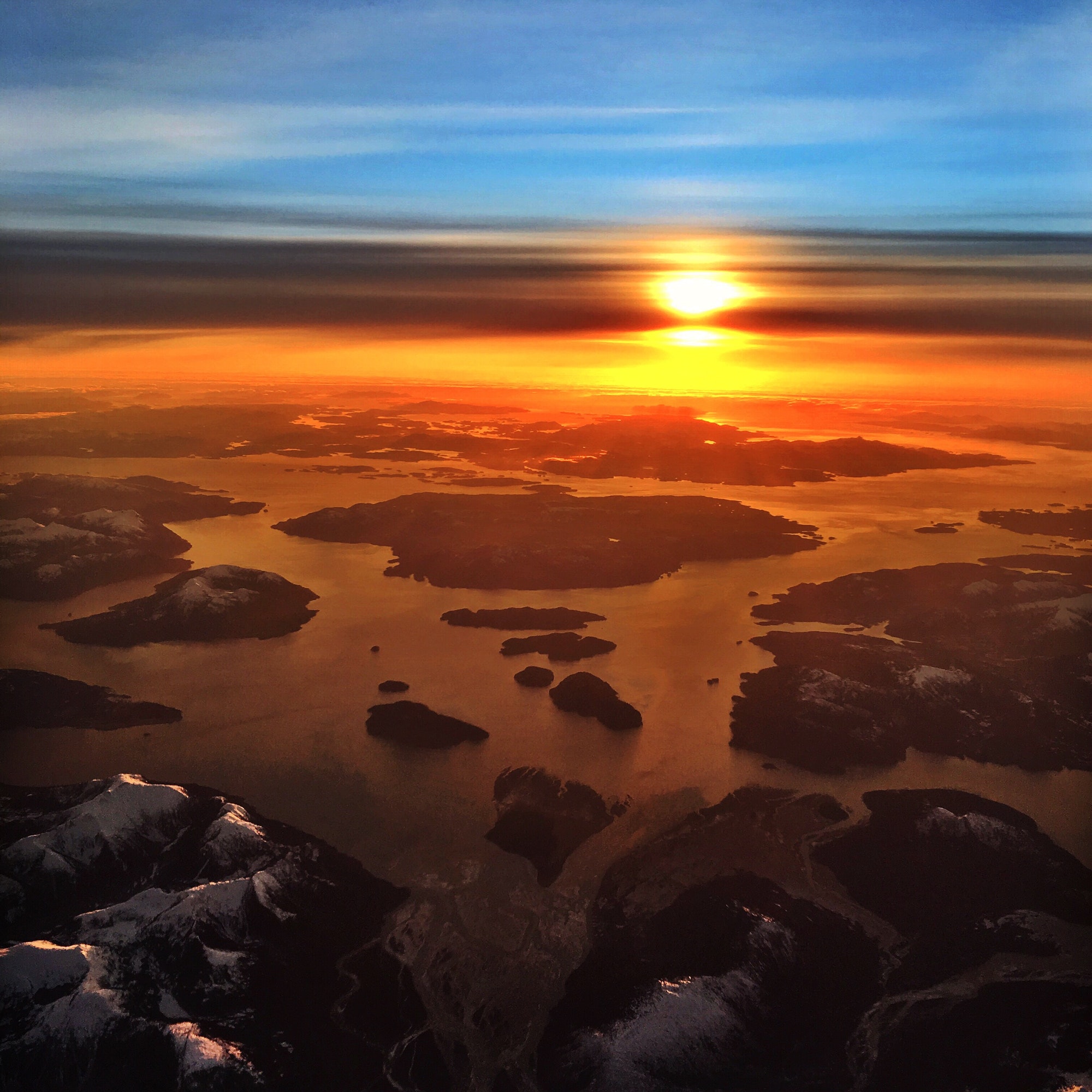 Tsui River, Alaska, and the coho salmon are still arriving 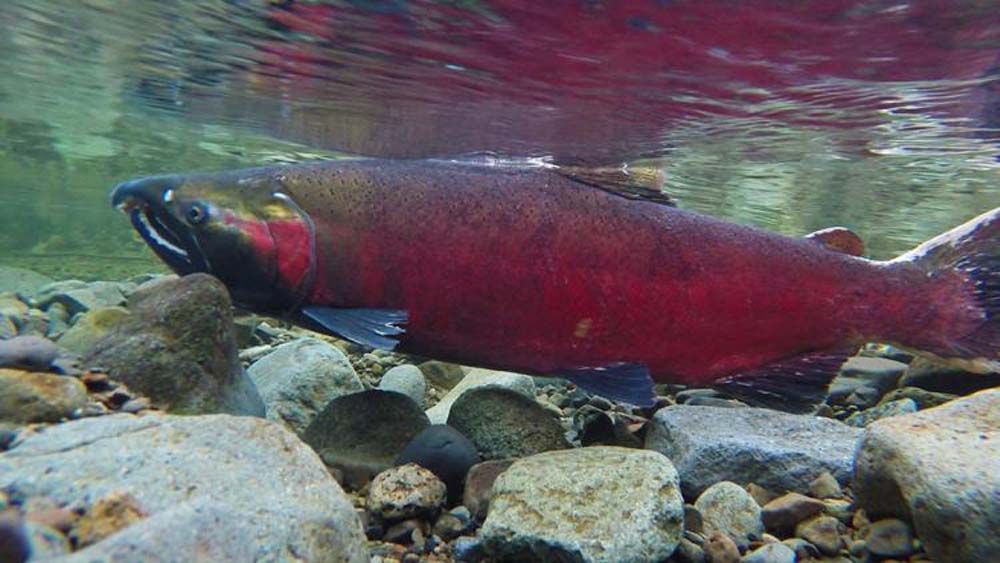 It was not business as usual on this particular fall week

A business trip meant I’d miss some good late fall trout fishing at home in Western Pennsylvania. My call to action sent me on a go west young man journey to Denver and then onto LA.

One phone call turned into an unplanned stop in Seattle. From there, I would end up in the wilds of Southeast Alaska in a rustic cabin on a feeder stream that leads to the Tsui (sigh – you) River.

Spawning coho (or silver) salmon develop a deep reddish or maroon coloration that covers their entire body – head and tail included. Ocean adults and spawning-phase coho have small black spots that run along the back and on the upper lobe of the tail. Coho also have a dark gray or blackish mouth with a white gum-line.

My most western account had offices in Seattle and Anchorage. Charlie owned a specialty construction company and moved a lot of product in remote real estate with  mostly Federal Government projects.

We had become fast friends having been in the same NFL class of draftees with short-lived careers thanks to combat wounds. Serendipitously, our vocation and avocation  paths brought us together once again. We served on the boards of two industry trade groups and were both unmanageable fly fishing enthusiasts.

It was mid-October when Charlie and I flew from Seattle to Alaska with planned and unplanned stops along the way in his restored de Havilland Beaver Floatplane. The manufacturing information plate screwed to the wall on the passenger side of the divider behind the pilot seat, said 1940 something.

Charlie had a camp on the Tsui River. We were planning a raid on the coho swimming and spawning in the Tsui River; our bonus would be steelhead if we stayed long enough. The Coho ran well into November and steelhead later than that, but the weather a prohibition for much beyond our attempt.

Charlie’s guide, handyman, boatsman, cook, and host was a Lummi native American, Danny Wetter. Danny was an ex-Army Ranger and friend of Charlie’s son, who was also an ex-Army guy

When we arrived, Danny was making the cabin ready for winter. He was struggling with freezing water pipe issues. The camp was not usually open so late in the season, but the weather had been unseasonably warm, a prediction by NOAA that came to be.

The cabin was, of course, unheated. It was cold at night. We slept on two couches, Danny on the floor, up close and personal with the fireplace. We took turns nurturing the hearth during the evening. Breakfast was coffee, salmon, burnt toast, and honey.

Smoked salmon, crackers, capers, and water would be lunch, no time for shore lunch. The daylight time window was working against us. Fishing was what the daylight hours were about – 7 am to 8 am late fall in Southeast Alaska. 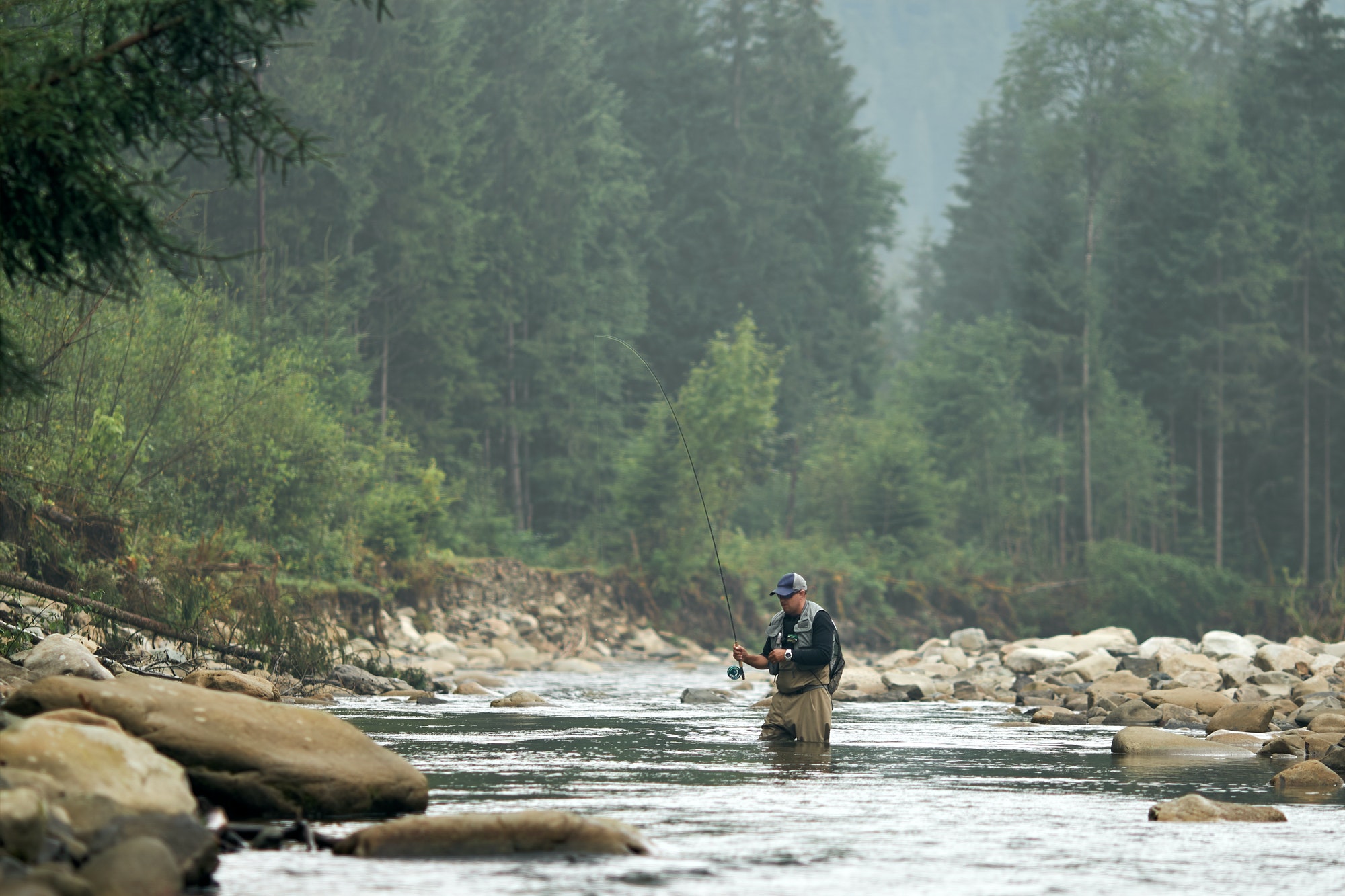 Danny captained the jetboat, and Charlie didn’t even ask where he was going

Our first catches were dollies, fat ones. We didn’t dally with the dollies – it was off to a better coordinate.

When we reached the hunting grounds, we spread out. We all fished with 9-foot eights, 9- and 10-foot leaders, with 16 # tippets (IGFA rigged). Our fly choices varied. Coho will readily hit a surface fly, unusual for a Pacific salmon, but that’s why they are so much more fun to fish for – I stayed su-surface streamer-focused. Charlie surface flies – poppers, and Danny performed his Euro nymphing version. Bouncing along the bottom with an egg pattern.

The coho were everywhere and willing. Most were fresh, but some were in various changes to spawning colors and jaw shape (kype). I never thought I could ever match such a salmon day – until the next day. We each lost count on both days. Danny caught a lot of egg-eating dollies and one steelhead – a reward for getting down.

Coho are anadromous (a-nad-dra-mous), freshwater spawners that live in saltwater

They travel inland from July to November – peaking in Alaska (August/September for the lodge goers) August/September. They make inland landfall from Japan and eastern Russia, around the Bering Sea to mainland Alaska, and south to Monterey Bay, California.

In Alaska, they are in coastal waters from Southeast to Point Hope on the Chukchi Sea and the Yukon River to the Alaska-Yukon border.

Fresh cohos are bright silver in coloration with black spots. They range 22-to 32-inches long and weigh between 7- and 20-pounds. [The IGFA world record All-Tackle is 33 lb 4 oz, Pulaski, New York in 1989.] All the fly fishing world records are Alaskan—the largest taken in Cordova on the Eyak River, 21 lb 8 oz – 16-pound tippet. The Tsui River got a world record mention at 15 lb 8 oz.

Most of our Tsui catches were in the lower ranges of around 8- to 10-pounds, with a few larger animals guessed to be in the 15-pound class. If you’ve never caught silver, you need to think about experiencing it. Saying it’s “like” will never do a coho justice. They’re just singularly unique. They are muscular beyond their size and love to leap more than a small, 30-pound tarpon.

Aside from Atlantic salmon, they are, in my opinion, the tastiest of all Pacific salmon, but cooking is key.

• Fly rods: An 8-weight is the perfect tool for most folks. A switch rod is now the Alaska go-to stick, and for a good reason. You cover more water, not as distance limited as with a nine, and the physical demands are far less. The Tsui River “mostly” affords wide-open casting with no hinderances to catch your fly. A 7-weight is okay, but an 8-weight has so many more applications – a duality that sevens don’t own.

• Reels: You can get away with a so-so reel for chum salmon, but it would be profligate to use one for silvers. A coho is an aerialist that prefers back-flips to forward launches (funny to watch) and is a hard runner with plenty of soul. Bring large arbor with a good drag, and make sure you have insurance backing.

• Fly lines: A fly line can be anything that aids your fly rod choice. Able-bodied casters are always at the head of the class. Today, most folks use floating with adaptations found in leader builds and tips with different sink rates. If there is a replay, I’d go with a short, shooting head and employ Poly/Versi or SA’ version leaders and a packet of tips. That would cover all bases.

• Leaders: With silvers, leaders do not have to be long. On a redo, I’d use a fixed length knotless cutoff at about 5/6-feet, add a tippet ring and then add 4+/- feet of class tippet to make a 9- to a 10-foot mono leader. The tippet ring benefit is changing length or pound test tippets, fast. It’s not a sit-down and lose 10- to 15-minutes of fishing time.

• Flies: While the noted diet of a coho is aquatic insects, fish, and squid; it’s brightly colored attractor patterns that seem to do the most damage. Today, Woolly Buggers; black, purple, and pink tied as leeches, Clousers for sub-surface action, and smallish red poppers for great airborne attacks.

Always check with your outdoor travel agent’s Alaska specialist on best bet booking dates for coho. The three listed below will know what they’re talking about.