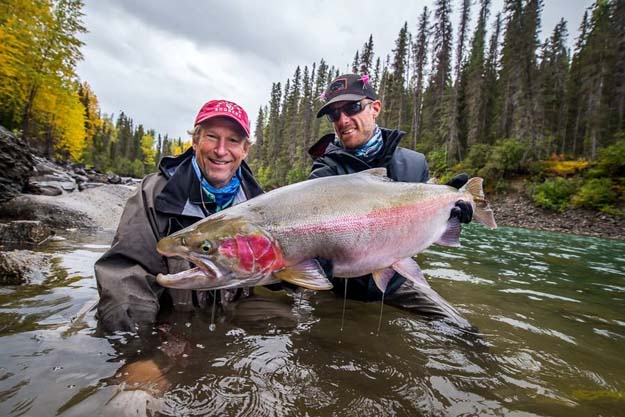 [dropcap]T[/dropcap]he flat earth folks, currently in charge, are in the throes of attempting to sell off our nation’s public lands, destroy our national parks, monuments, and forests systems, and overturn the clean water and clean air acts.

In spite of their dangerous conservation buffoonery, it cannot be denied that increasing heat is significantly disturbing to our cold water game fish. A recent Science Friday report from SteelHead News, a Trout Unlimited-led, range-wide wild steelhead conservation effort, exposes some interesting facts about the fish of 1,000 casts and, almost assuredly, others.

While we are not scientists, just avid fly anglers and conservationists. Our guide friends from around the world, familiar with cold water animals, tell us (in Acappella) that rainbows, browns, dollies and other trouts react to invasive warming water the same way steelhead do. Think trouts from around the globe – Labrador to Tierra del Fuego, Alaska to New Zealand, Russia to Ireland. Claudio Baigun published a study in 2003 that examined habitat use by wild summer steelhead in Steamboat Creek, a tributary to Oregon’s North Umpqua River. Specifically, he wanted to determine whether steelhead were seeking out and using particular types of habitat during the hot summer months. During the two years of data collection more than a quarter of the wild summer, the population was estimated to be holding in Steamboat Creek, clearly demonstrating the importance of this small tributary to the Umpqua’s wild steelhead. Despite the large numbers of fish present in Steamboat Creek they did not use a large proportion of the available habitat, rather, they focused firmly on using one type of habitat: deep pools.

How did they come to this finding?

First, researchers measured and characterized the habitat found in 38 deep pools, or those pools having at least 0.8-meter of depth — a bit under 3-feet deep. Strikingly, while such pools accounted for only 4% of the total habitat in Steamboat Creek, they were the only types of habitat used by adult steelhead. Think about that, hundreds of steelhead in a fairly large creek relying on only 4% of the available habitat.

Second, the author further separated these deep pools into “cold” and “warm” categories. He found that steelhead strongly favored the cold pools, which were defined as having a temperature below 19°C (66°F). Not all pools were simply “cooler.” Some were warmer than 19°C on the surface but were more than 2°C colder near the bottom. They were what we call thermally stratified, which happens if there is limited mixing of the warm and cold water. Colder water is denser than warmer water, so if springs or seeps come in somewhere along the bottom of the pool, the cold water tends to remain there. And that is exactly where steelhead in those pools were holding.

Interestingly, steelhead were not observed in cold non-pool areas near tributary junctions where one might expect to find them, indicating temperature was not the only factor driving habitat selection.

Fortunately for anglers, steelhead in larger rivers don’t have to be quite as selective about their holding water because there tends to be more cover and diversity in water temperature. Read the complete report . . .