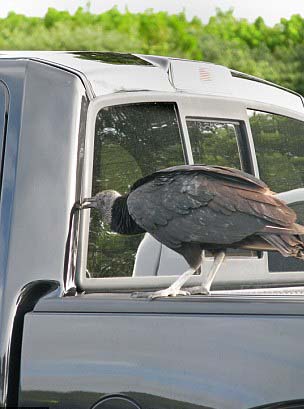 Uncategorized: It’s for the birds

Vulture ‘survival kits’ are being given to motorists visiting the Everglades National Park in Florida, because migrating birds have acquired a somewhat unusual taste for rubber. They can eat rubber gaskets in one minute – entire vehicle.

[dropcap]O[/dropcap]ver the last few years, staff members at Everglades National Park have experimented with ways to scare off flocks of vandals that lurk in parking lots every winter, sporadically defacing cars, trucks and boat trailers.

But nothing has curbed the curious appetite that migrating vultures have developed for windshield wipers, sunroof seals and other rubber and vinyl vehicle parts. So this winter, the park is shifting to purely defensive tactics against the big birds, expanding a program that provides visitors at the most trouble-prone sites loaner “anti-vulture kits” consisting of blue plastic tarps and bungee cords.

“It’s recognition on our part that they’re part of the park and we’re the intruders in their world,” said park wildlife biologist Skip Snow. “The vultures are doing what comes naturally.”

Naturally, as in flying south for the winter and congregating in the Everglades. The car-munching, on the other hand, is a departure from the normal diet of the dead and decaying and a habit that largely perplexes scientists.

The birds, usually black vultures native to the Southeast that swell the year-round resident buzzard population during cold months, can be found many mornings perched on cars or trucks at Anhinga Trail, the park’s first and most popular tourist stop, or in Flamingo, an isolated outpost on Florida Bay. Much of the time they do little or no damage but once they get going, the destruction can sometimes be extensive, shocking even experienced Glades hands.

Adam Gelber, a consulting biologist and frequent Everglades angler, found that out early this winter when he took visiting scientists from California on a scenic tour of park waters, finding rare crocodiles, bald eagles and wake-riding dolphins.

“It was a National Geographic kind of day in the park,” Gelber said.

At least until he walked back to the Flamingo boat ramp. Vulture dung covered the hood of his GMC Yukon. Worse, just about every piece of rubber and plastic on his sunroof, windows and hood was ripped away and shredded. The insurance company paid $1,850 for the damage, he said — and that was before he discovered the birds had also apparently yanked out the seals on the bottom of the doors as well.

“It took the guys from the insurance agency 10 or 15 minutes to even figure out how to code it,” said Gelber, who has since decided to invest in his own anti-vulture kit.

The park’s vulture problems are certainly odd but they’re not unique.

Though known primarily as scavengers, vultures have caused similar problems in many states, attacking a wide variety of materials from roof shingles to pool screens. Scientists have studied the behavior for years and developed some tactics for discouraging it, but they can still only speculate on what whets the birds’ appetites.

A variety of theories have been debunked. One is that rubber releases an aroma that attracts the birds, possibly from some chemical or other ingredient in the material, such as fish oil. But experiments with various emissions from the stuff that goes into car parts have provided no clear answers and the black vultures, biologists say, don’t have a great sense of smell anyway — which is probably good, given the dead and rotting meat they typically consume. [Read More]

Curtis Morgan can be reached at The Mimi Herald > cmorgan@MiamiHerald.com

If you plan on fishing out of Flamingo – beware