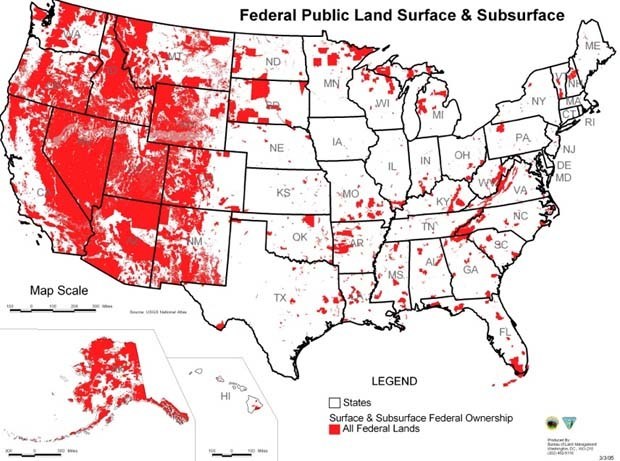 Undercurrent: Transfer of public lands to states may spell disaster

Lobbyist for fossil fuel interests, real estate and other special interest groups are calling in their congressional markers

They want our western Public Lands transferred to the states. States that cannot possibly afford to manage or protect those lands. Managing those newly acquired lands equivalent to current federal standards could bankrupt any state.

Lobbyist and politicians with Draconian intentions know that. They will sell you and me out faster than you can say crook. Their plan will be to sell themselves as benefactors, saving the day by rescuing the states then, under the cover of darkness, swoop in and buy the state lands. An easy to read road map. One that leaves you and me and our generations to come without public lands to hunt, hike, camp, fish, canoe, kayak or even photograph.

“America’s 640 million acres of federal public lands – including our national forests and Bureau of Land Management lands – provide hunting and fishing opportunities to millions of Americans. They represent the uniquely American values of freedom and adventure that are the envy of the world.

This is particularly true in the West, where, according to the U.S. Fish and Wildlife Service, 72 percent of sportsmen depend on access to public lands for hunting. Without these vast expanses of prairie and sagebrush, foothills and towering peaks, the traditions of hunting and fishing as we have known them for more than a century would be lost.” Sportsmen Access

Those once public lands will be posted as private, sullied and polluted as needed for profit and some just kept for the private use of a rising new royal class of Americans

Here’s a Press Release from Theodore Roosevelt Conservation Partnership on the Transfer Movement: an unprecedented threat to public access The Public Lands. America’s outdoor heritage, access to hunting and fishing threatened by attempts by Western states to wrest ownership of federal public lands.

A new report, “Locked Out: Public Lands Transfers Threaten Sportsmen’s Access,” released by the campaign today, details takeover attempts in some Western states that would jeopardize public access to the rich hunting, fishing and outdoor traditions provided by the nation’s public lands. A video call to action against public lands transfer compliments the report.

“America’s 640 million acres of federal public lands provide irreplaceable fish and wildlife habitat and public access for hunting and fishing,” said Joel Webster, director of the TRCP Center for Western Lands. “Millions of American sportsmen use these lands each year to spend time with our families, challenge ourselves physically and put food on our tables. In fact, more than 72 percent of Western sportsmen depend on these lands for access to hunting.

“Special interests in some Western states, however, are proposing that these lands be transferred to individual states,” Webster continued. “Sportsmen know firsthand that the transfer of these lands to individual states is not a legitimate option for addressing public land management challenges. We are committed to keeping public lands in the public’s hands so that current and future generations of hunters and anglers can continue to access and enjoy them.”

The management of America’s vast system of public lands carries an enormous price tag, and state budgets could be stretched beyond their ability should they take over their ownership, with widespread industrial development and the eventual sale of these lands to private interests being the expected result. If privatized, millions of acres of the nation’s most valuable lands and waters would be closed to public access, and an American birthright would be lost.

Public Land just outside the city limits of Missoula, Montana.

At the 2015 Shooting, Hunting and Outdoor Trade Show, or SHOT Show, sportsmen joined with industry members and policy experts this afternoon to end attempts to sell or transfer America’s public lands.

“Our business is located in the West because of public lands,” said Catie Webster, who manages public relations and brand strategy for Mystery Ranch, a Bozeman, Montana-based gear manufacturer. “Mystery Ranch’s customers rely on America’s public lands for access to mountains, lakes and rivers in order to pursue their outdoor passions. Like so many other companies in the outdoor industry, public lands inspire our products and our customers. The transfer or sale of public lands would deal a blow to our business and America’s $640 billion outdoor recreation economy.”

“Our public lands access and our outdoor heritage can disappear in this lifetime,” said Dan Harrison, big-game expert, co-host of Remington Country TV and owner/partner of Colorado Mountain Adventures. “It is our duty to ensure our future generations have the public lands to carry on our outdoor traditions.”

The speakers were united in urging sportsmen to actively oppose efforts to transfer ownership of federal public lands to Western states – and to stand up on behalf of these iconic lands and waters.

“Public lands are the cornerstone of our outdoor heritage,” concluded Harrison. “Our forefathers protected them for us – and now it’s our duty to do the same.”

Read the report. Watch the video. Sign the petition . . .