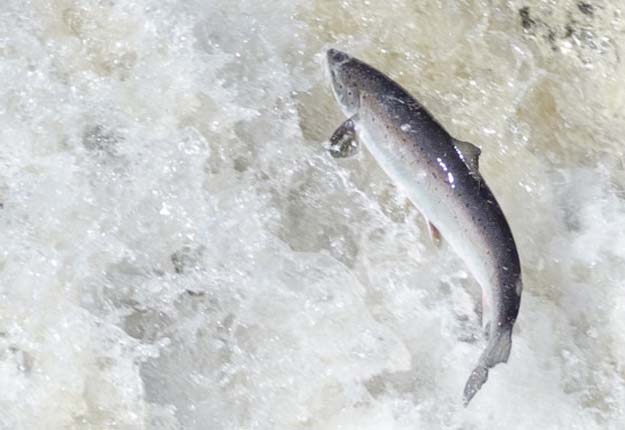 Was the answer in the headlines?

Atlantic salmon and the dots that connect them to change

[dropcap]I[/dropcap]n a recent Rivernotes (notes about this year’s salmon run) written by the Atlantic Salmon Federation (ASF), the noted subtitles appear in the same article. The mention of “climate change” and a “baitfish” connection are absent. They are a part of a bigger story, but that was not Rivernotes’ purpose.

• “Grilse numbers much lower than expected.”

• “Striped Bass expand upstream and into a more northerly habitat.”

The cause of rapid climate change, understood by the leaders of modern, industrialized world as a reality, is rejected by United States’ leader. He prefers another standalone view not shared by the overwhelming majority of citizens and the scientific community in the U.S.

Unfortunately, the speed and segments of the natural world that will be affected are timelined by many, but inaccuracy plagued – like when, where, and how impactful?

Atlantic salmon, possibly the canary in the cage, shed a little light on the future… what to expect

Recent stories appearing in science-based organizations’ communications, like independent dot orgs, universities, federal (NOAA) and commercial fisheries organizations (mostly based in Europe) all have a common theme. Rapid temperature changes and looming alterations in oceanic current-flow patterns are real, and will be impactful on a global scale.

The ocean and freshwater connectors are baitfish/forage fish movements into new waters (sardines, herring, menhaden and many others – including crustaceans like shrimps).

Sunseekers do not move to Moscow

The localized versions of that movement titillate us with headlines, such as a particular game fish is being caught in a previously unknown region. Well, they’re not being caught in those “unknown regions” just because the water is a one degree cooler or two degrees warmer. It’s about the movement of bait. The forage fish follows what they consume to live, the predators track what they eat, baitfish. ASF Rivernotes, November 9, 2017. Striped bass with Atlantic salmon smolts as their main stomach contents (upper R corner of photo). Photo Greg Dixon/ASF. You should be able to connect the dots between smolts and grilse… why there were less grilse.

“ . . . anglers are discovering striped bass many dozens of miles above salt water. . . . in the Southwest Miramichi, they were found above Rocky Brook, and in the Cascapedia 30 or more miles above the estuary.” That BTW is freshwater, not a long term hospitable environment for adult stripers.

In an interview, one angler of the Northwest Miramichi who completed the Atlantic Salmon Federation survey on Striped Bass sightings said: “I never have in my life, I’m 74, seen the concentration of fish that were in the Lower Northwest branch of the river. During one moment I caught three fish over 3-feet long on three consecutive casts. All were over the slot limit so one can only imagine what was in their stomachs.” further: “In Labrador, fishermen were finding dozens of Striped Bass in their nets in Forteau Bay, even though they had never seen them previously.” – ASF