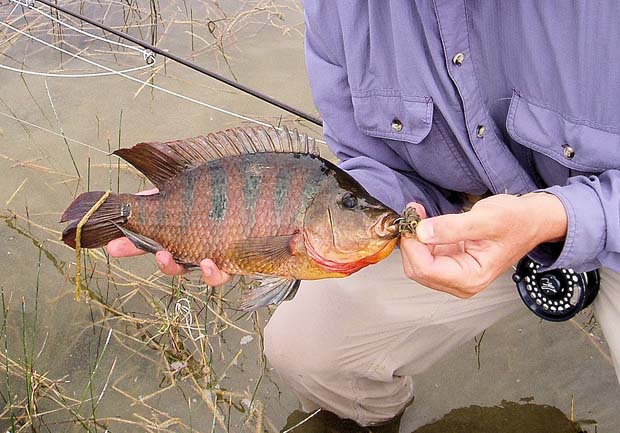 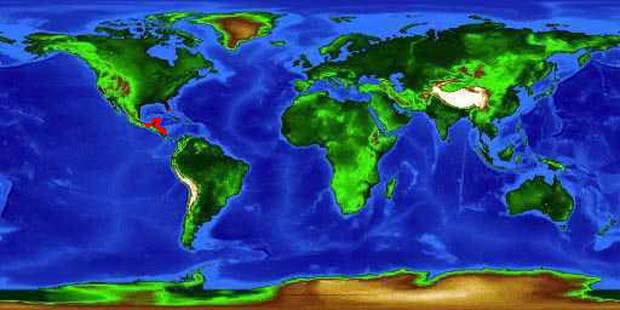 The Mayan cichlid is native to the Central American Atlantic slope waters of southeastern Mexico (including the Yucatán Peninsula), Belize, Guatemala, Honduras, and Nicaragua. Dr. Günther’s type specimen is from Lake Petén, Guatemala. Non-indigenous populations of Mayan cichlids, first reported in 1983, are established in portions of Florida Bay and the Everglades in southern Florida, USA.

Florida distribution map for the Mayan cichlid: range expansion since introduction in 1983:

While the map shows moderate expansion of Mayan cichlids (1983 to 2001), a freeze in 2010 decimated many stocks of fish, reptiles and mammals here in South Florida. Today, most have made strong comebacks. These ciclids have rebounded well.

Like so many members of the family Cichlidae, the Mayan cichlid thrives under a wide range of environmental conditions. Within their native range this euryhaline fish is found in a wide range of coastal lowland habitats, exhibiting a tolerance if not outright affinity for brackish to marine conditions. Mayan cichlids have even been observed to breed in the sandy areas near coral reefs. 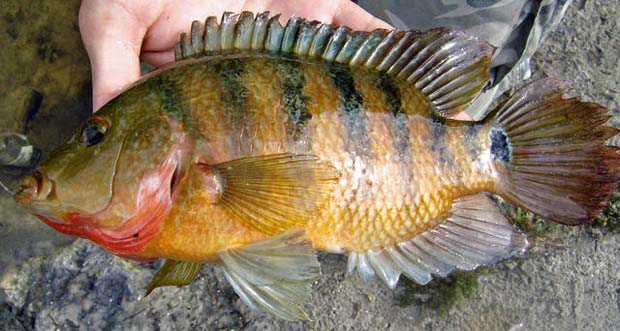 There are are many varieties of exotics In South Florida. This Mayan specimen very colorful.

Mayan cichlids are attractively colored fishes and adults in breeding condition can be quite vibrant. The background color is olive-brown dorsally, grading to a light brown or beige towards the abdomen. Pink is often suffused throughout but is most conspicuous in the throat region, especially in breeding males. The first of five to seven rather wide, green-black bars are located behind the head with the last situated at the caudal peduncle. The upper half of the caudal peduncle is marked by a conspicuous, silver-blue ring or “halo,” the center of which is black. It is for this “eye-spot” on its tail that the Mayan cichlid was assigned the species name urophthalmus (ur from “oura,” Greek for tail; ophthalmus from “ophthalmos,” Greek for eye).

· Size, Age & Growth
A 1992 study on a population of Mexican Mayan cichlids concluded that individuals completing their first spring (one year of age or slightly greater) measured 70-130mm standard length and were reproductively mature. Two-year-old fish measured 131-200mm standard length and comprised the oldest individuals in the study sample, suggesting a maximum of two reproductive seasons for the species.

However, the conclusions of a recent study conducted in Florida’s Everglades National Park (ENP) contrast with those of the Mexican study. Southeastern ENP Mayan cichlids were found to reach a maximum age of 7 years rather than 2, with a size range of 33-66mm standard length for one year olds, 44-130mm SL for two year olds. The ENP study also concluded that males reach a larger size than females, albeit at a slower rate of growth. The authors of the ENP study attribute the contrasts between their study and the Mexican study in part to the absence of fishing pressure on the ENP population and differences in temperature between Mexico and South Florida.

The Mayan cichlid is known to live at least 11 years in captivity.

The Mayan cichlid is a predator of small fishes and aquatic invertebrates. Plant matter and detritus have been recorded from the stomachs of Mayan cichlids although it is likely that these items are ingested incidentally to the consumption of a primary prey item such as an aquatic invertebrate. Specimens collected as the focus of the study that reported the presence of the species in South Florida for the first time were found to contain the remains of small fishes, snails, larval dipterans (mosquitoes/flies), and small amounts of algae and detritus, among other items. One study noted the presence of a greater amount of vegetable matter in the gut of Mayan cichlids living in saline environments versus those residing in freshwater habitats. 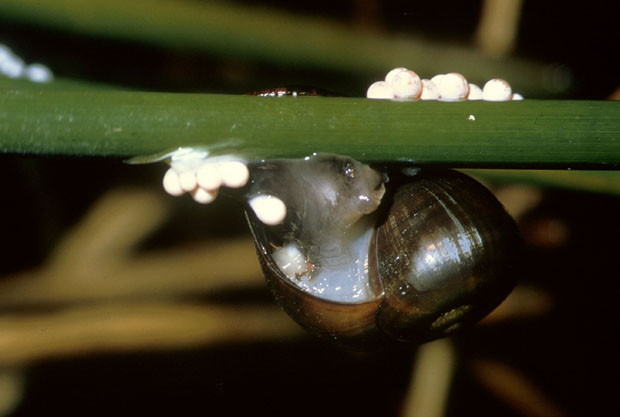 The apple snail is a prey item of the Mayan cichlid courtesy U.S. Fish and Wildlife Service (Applesnail).

Mayan cichlids spawn in the spring and early summer. Nest construction and parental care is likely for this species, although little is known of its breeding habits or fecundity.

Mayan cichlids are prey for a wide variety of aquatic and terrestrial organisms including other fishes and wading birds. 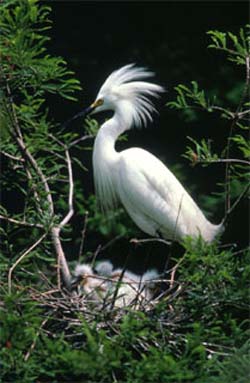 Owing to its size and palatable flesh, the Mayan cichlid is targeted by artisanal fishers and is the focus of a number of aquaculture facilities in many parts of its native range. The non-native South Florida populations are popular with many anglers due to the Mayan’s aggressive approach to bait and its feistiness when hooked. Additionally, the species is favored by some for its resemblance to the much sought after marine and brackish water snappers (Lutjanidae). Yet still other recreational and sport fishers find the fish to be an annoyance, often interfering with their attempts to hook larger and more desirable species. In particular, those fishers targeting snook in their mangrove haunts may at times find it difficult to catch anything but Mayan cichlids. The species is at times available in the aquarium trade, but owing to its large size and generally pugnacious attitude adults are suitable only for those aquarists possessing the proper facilities.

This species is currently not listed as threatened or vulnerable by the World Conservation Union (IUCN).

FLY FISHING FOR MAYAN AND OTHER EXOTIC CICHLIDS

While you might not think you have a tastes for catching small footballs a on a fly,  give these at try while the kids are at the beach. I think you’d find fly fishing for these pesky little dynamos a hoot. They’re not line shy nor shy anything – although do do their  best to stay camouflaged in near-shore environment and in shallow, marsh-like surrounding areas. But drag a fly in an irregular retrieve and its game on.

A lot of snook fishermen get really frustrated with the number of takes a cichlids will take when you think you’ve made the perfect snook cast. Relax!

Be glad to kept you 2 – 3-weight, because that’s all you’ll need for the lot of them. Small poppers, modified Clouser- almost anything will encourage a strike.