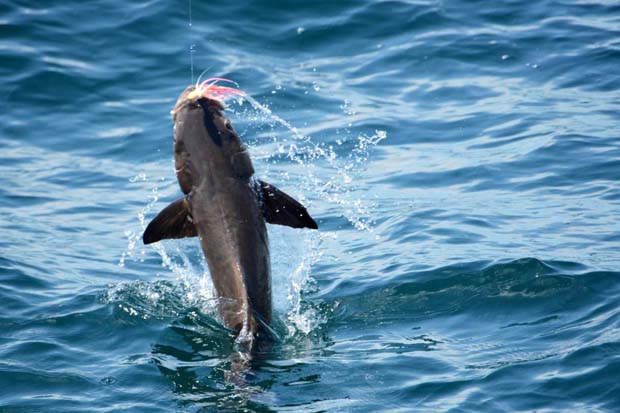 It is the only known member of the family Rachycentridae. It has a long, broad, depressed head. The overall appearance of the fish is similar to that of a small shark, given the shape of the body, the powerful tail fin, and the elevated anterior portion of the second dorsal fin. Even more striking is it’s resemblance to the remora. The most noticeable difference between these two species is the suction pad on the remora’s head. The cobia is known to swim with sharks and other large species as the remora does. 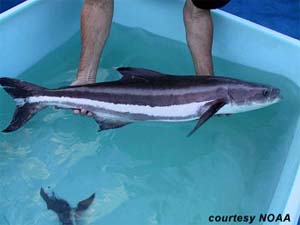 The cobia’s coloration and markings are distinctive. The back is dark chocolate brown while the sides are lighter with alternate horizontal stripes of brown and silver or bronze and white. The markings on smaller specimens are more vivid; the black and dark stripes are blacker, making the lighter areas stand out more.

Cobia in an acrobatic mode after taking a big fly. Photo by indianapublicmedia.org.

The cobia is a highly rated, hard hitting game fish that is prone to long, powerful, determined runs and occasional leaps. Often when one is hooked the entire school will surface along with it. Preferred fishing methods are trolling with lures or baits, bottom fishing, jigging, chumming, and spin casting. They can be caught on crustaceans (which is why they are nicknamed “crab eaters” in Australia) as well as on smaller fishes. Good baits are squid, crabs, small live fishes, cut baits, and strip baits. Spoons, plugs, and weighted feathers can also be used. They rate high as table fare.

NOTE: They will readily take a fly. If you see a ray in the shallows and cobia are around they will follow the ray picking up wake  disgorged crabs. Around buoys, pilings and structures you’ll need to chum them up or just take a few runs around a buoy; back away and wait. Cobia, being very curious will come up to see what’s going on. There’s your shot.