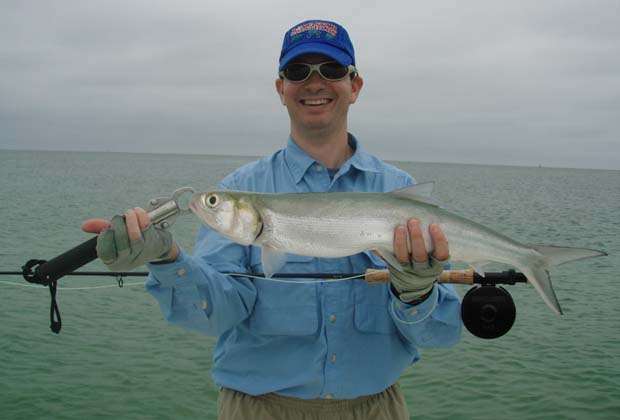 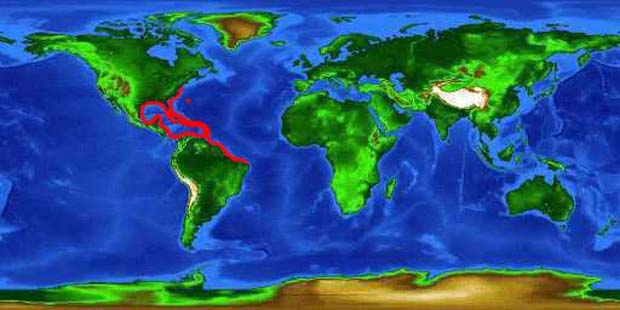 The ladyfish (saurus) occurs in the western North Atlantic Ocean from Cape Cod, Massachusetts to the Gulf of Mexico and Caribbean Sea, and south to Brazil. The ladyfish is also found in the waters surrounding Bermuda. It is most commonly observed south of North Carolina. The ladyfish has been observed in the western Pacific Ocean and the Indian Ocean.

This species is typically found in brackish water lagoons and bays, as well as mangroves, tolerating a wide range of salinities. Occasionally this fish is found several miles offshore. The ladyfish prefers open water areas in channels with moderate currents, and shallow bars and eddies at bends in rivers. It lives to depths of 160-feet. As a thermophilic fish, the ladyfish has been reported in cold-related fish kills in Florida. It can tolerate low temperatures for short periods of time. Collections of this fish have been successful at temperatures ranging from 52-95°F.

It is an elongate, slender, and robust fish with a large, deeply forked caudal fin. The body is rough with small, thin, silvery scales. The lateral line runs straight down the length of the fish. The head of the ladyfish is small and pointed with a large terminal mouth. The caudal lobes of the ladyfish are long and slender.

Dorsally, the ladyfish is silvery blue to greenish while ventrally and laterally they appear silver in color. The dorsal and caudal fins are dusky yellowish to silvery and the pectoral and pelvic fins are speckled and pale.

As a predatory fish, the ladyfish has small, sharp teeth. The gular plate, a ventral bony plate that is located between the two lower jaws, is narrow.

The ladyfish grows to a maximum length of 3 feet (1 m) and weight of about 15 pounds (6.8 kilograms). Length at which sexual maturity is attained is unknown for this species. The ladyfish lives at least 6 years.

Larvae do not forage, but instead absorb nutrients directly from the water. As the larvae grow, they feed primarily on zooplankton as well as insects and small fishes. This is followed by a dietary switch to small fish and crustaceans as the larvae grow into juvenile fish. Adult ladyfish are strictly carnivorous, feeding on small bony fish, including members of its own species, menhaden, and silversides, as well as invertebrates including crustaceans. This fish swallows its prey whole.

Ladyfish spawning occurs in offshore locations throughout the year. Off the coast of Florida, spawning is thought to occur during the fall months. Neither the eggs nor yolk-sac larvae have been described for the ladyfish. The metamorphosing larvae and juveniles have been found inshore in estuarine habitats. However, it is known that the larvae undergo dramatic changes in body form accompanied by two periods of length increase, interspaced with a period of length decrease.

Stage I is the initial period of length increase. The larvae in this stage are characterized by a long, ribbon-like, colorless, transparent body with large fang-like teeth, small head, and very small fins. They lack gills and red blood cells and have a gut that is not open. Oxygen and nutrients for the larvae are absorbed through the skin. The conclusion of Stage I results with the development of the fully formed leptocephalus larvae. Maximum length is about 40-45mm during Stage I. During Stage II, the larvae decrease markedly in length and gradually lose ribbon-like leptocephalic morphology. Late in State II, and throughout Stage III, the larvae undergo pronounced changes in body, including decreases in body depth, snout length, dorsal and anal fin heights, and pectoral fin size. The larvae shrink to about 18-20mm. Stage III is the second period of length increase that terminates with the beginning of the juvenile stage. At a size of 30-35mm, the larvae metamorphose into juveniles.

Larger fish and carnivorous zooplankton may prey upon the ladyfish eggs and juveniles. Adult ladyfish are susceptible to piscivorous birds, sharks, porpoises and alligators.

When hooked, the ladyfish yields good sport to the light-tackle angler. This species is known for their behaviors of skipping along the water surface and jumping after being hooked. Although ladyfish is marketed fresh, salted and frozen, it is considered as having little value as food due to the meat being bony and dry. There is no commercial fishery for this fish.

The estuaries and coastal mangroves and marshes that are utilized as nursery grounds by larval and juvenile ladyfish are heavily impacted by development activities.

Currently, the ladyfish is not listed as endangered or vulnerable with the World Conservation Union (IUCN). The IUCN is a global union of states, governmental agencies, and non-governmental organizations in a partnership that assesses the conservation status of species.

Adult ladyfish (saurus) are primarily an inshore fish and generally mixed in with jacks, seatrout, tarpon – found in brackish water lagoons, bays, estuaries. They will enter freshwater and access tidal pools and canals.

In the surf they’ll be mixed in with jacks, blues and snook.

Often form large, aggressively feeding schools – chasing bait (glass minnows and small mullet) to the surface. Also feeding on other small fish as well as crustaceans. When you see birds diving and fish striking under the birds, you can almost bet there are some lady fish there. Tip: look for birds.

Florida record is 4-pounds (IGFA) with 2- to 3- pounds very much the average. Ladyfish spawn offshore, producing ribbon-like larvae similar to bonefish and tarpon. Peak spawn is in the fall.

Schooled ladyfish willl chase baits like glass minnows and small mullet so a patterns mimicking what they’re after will work well. And remember, size is very important. If you want to build a little confidence with your not so hot fly tying skills. Ladyfish are not fussy eaters – and won’t tell a soul about your flies they’ve eaten.

Poppers also work well as will anything making a little noise. Although aggressive, you can’t drive you skiff into a blitz, they’ll spook. Stay as far back as you’re able to cast (distance) to the fish blitz. If you have bait aboard a little pitched their way will do wonders for your ladyfish score card.

A mixed bag is common:

Many times there will be other fish mixed in with the lady fish: principally crevalle jack, bluefish, trout and tarpon. Rig your reel with mixed bag in mind. Plan ahead for trout, jack, blue that eats and be happy when a 35-pound tarpon eats. We recommend at least a 6- or 7-weight with a leader that has a thin wire attached to the fly. If you don’t want to use wire get at least 50-pound  fluorocarbon.