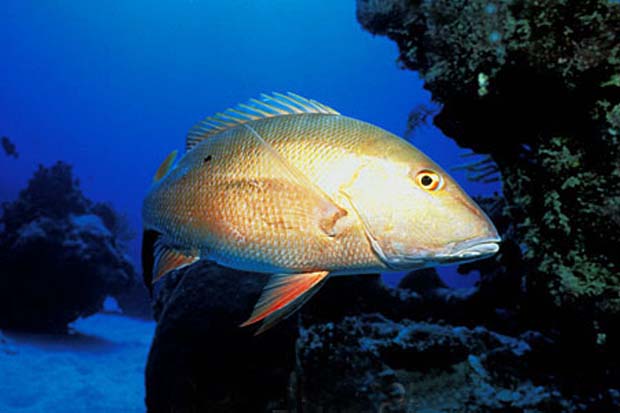 The Mutton snapper is a deep-bodied and compressed snapper that may reach lengths of 1- to 2.5-feet).

A common adult sized mutton snapper is around 5- to 15-pounds. The dorsal fin is continuous with 9 – 11 (usually 10) slender dorsal spines, the fourth of which is the longest. The pectoral fins are long, reaching past the anus. The head profile is steep and straight to the tip of the snout. The eyes are small. The mouth is large and terminal, with the maxilla just reaching the front of the orbit.  The upper and lower jaws, as well as the vomer have bands of villiform teeth.  In addition, the upper jaw has 6 canine teeth, four of which are enlarged. Body color is variable depending upon the activity of the fish.  Adults are olive green dorsally, becoming paler laterally and ventrally.  The ventral surface is reddish, as are all of the fins. The margin of the caudal fin is black. The snout bears an irregular blue line that reaches the posterior of the eye.  A second blue line runs from the maxilla to the eye.  A prominent black spot lies above the lateral line below the soft portion of the dorsal fin. When not active, the mutton snapper may exhibit a series of 10-12 dark vertical bars that run the length of the body.

In the Western Atlantic, ranges from approximately Massachusetts south to Brazil including Bermuda, the Gulf of Mexico, and the Caribbean.  It is most abundant off south Florida, the Bahamas, and the Antilles. It is common in inland and nearshore waters (mangroves, grass beds an canals). Larger adults are found on offshore reefs.

Mutton snapper grow to a maximum 37-inches in total length and may weigh as much as 30-pounds and can live as long as 29 years. The world and Florida records (IGFA) are 30-pounds, 4-ounces.

As with most snappers, the mutton spawns offshore in groups. Spawning typically occurs in July and August and females will produce 1.4 million eggs per incident.

Snappers are active diurnally and nocturnally and feed primarily on crabs, snails and smaller fish. Crabs make up almost half of their intake.

ANGLING NOTE: Today, an angler would rarely set out to catch a mutton snapper – they’re more of an opportunity species. If one takes your fly while you’re out chasing reds, it would be luck that lands it because of the mutton’s toothy nature. If, however, you see one while on the flats and you have a rod rigged with a bite guard you’d be in good shape to catch one. However, remember that a 10-pound mutton snapper is five-fold the fighter compared to a same weight class red.

Offshore is a whole new ballgame, but here again, you don’t specifically target a species in a 150-feet of water – anything could hit your baited line and for fly rodders; it’s not going to workout.

International Game Fish Association   and Smithsonian Maritime
Fly Life Magazine.com staff, Fly Fishing the Floria Keys (Clement and Derr / Amato Publications – 2005) and notes from an an interview with George Hommell, Jr. in 2000. George was particularly fond of mutton snapper. He said: “I like their their aggressiveness, toughness and especially the taste of their meat. Back in the 40s and 50s they were abundant – you could target them in those days.”