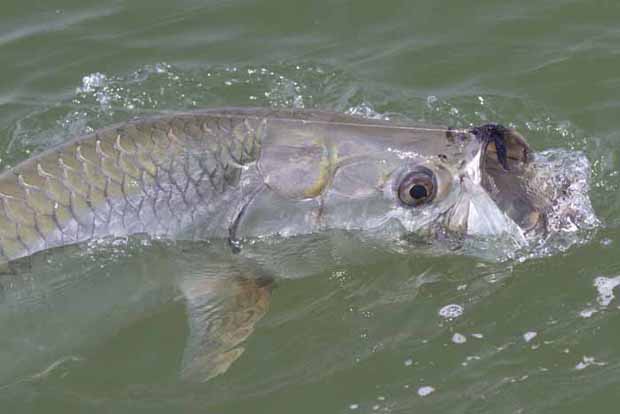 Tarpon have a distinctive dorsal fin ray that extends into a long filament, a large upward pointing mouth and very large scales

Primarily inshore fish, preferring shallow estuaries around mangrove forests, salt marshes or hard-bottom/seagrass communities of the Keys, Bahamas, coastal Atlantic and southward to the Yucatan and all the way to Panama. They tolerate a wide salinity range, and as juveniles, enter fresh waters. 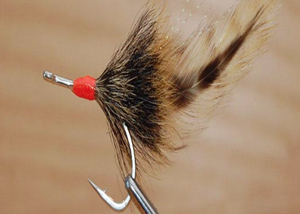 There are many fly patterns that will entice a ‘poon’ to eat, but this seems to travel better than most. It’s the Apte Too. Photo credit Florida Keys Outfitters!

Tarpon can gulp air and remove oxygen by means of lung-like tissue near their swim bladder. This “rolling” effect is one way to spot tarpon. Anglers catch tarpon that weigh 40- to 150-pounds on average. Tarpon do not mature until 7 to 13 years of age. They spawn offshore between May and September.

World Record IGFA: 286-pounds, 9-ounces, caught in Rubane, Guinea-Bissau on March 20, 2003 / State of Florida record 243-pounds, caught near Key West.  The female of the species is much larger than the male. 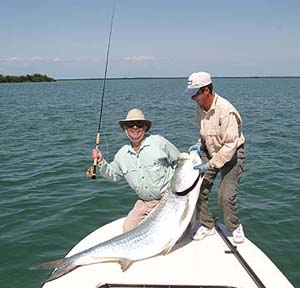 In Florida, this boast is now illegal.

Live shrimp or pinfish make good baits, but plastics and fly streamers work too. When sight fishing, land your presentation softly in front of a tarpon at an angle that lets you withdraw your lure away from the tarpon. Tarpon are not eaten. In Florida, it is illegal to lift the fish out of the water prior to release. Tarpon are a no kill game fish in Florida. A tarpon tag is required for harvest in Florida.

Occurs in warm temperate tropical and subtropical waters of the Atlantic Ocean. This coastal fish can be found both inshore and offshore. Because of its ability to gulp air directly into the air bladder by “rolling” at the surface, the tarpon is able to enter brackish and fresh waters that are stagnant and virtually depleted of oxygen. Such areas are relatively free of predators, thus offering a convenient refuge for the young.

The body is compressed and covered with very large scales. The lower jaw juts out and up. The teeth are small and fine, and the throat is covered by a bony plate. The dorsal fin consists of 12 / 16 soft rays (no spines) the last of which is greatly elongated. The back is greenish or bluish varying in darkness from silvery to almost black. The sides and belly are brilliant silver. Inland, brackish water tarpons frequently have a golden or brownish color because of tannic acid. 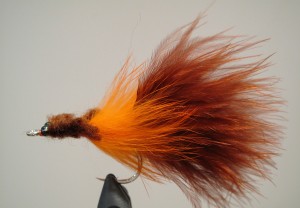 They may shed up to 12 million eggs. The eggs hatch at sea and the eel like larvae drift in shore where they undergo a metamorphosis, shrinking to half the size previously attained and taking on the more recognizable features of the tarpon as they begin to grow again. Tarpon, bonefish, ladyfish and eels all undergo a similar leptocephalus stage, but the first three fish all have forked tails even at the larval state, whereas the eel does not. Tarpon grow rather slowly and usually don’t reach maturity until they are six or seven years old and about 4-feet long.

Fishing methods are still fishing with live mullet, pinfish, crabs, shrimp, etc., or casting or trolling with spoons, plugs, or other artificial lures. The best fishing is at night when the tarpon is feeding. They are hard to hook because of their hard, bony mouths. Once hooked they put up a stubborn and spectacular fight, often leaping up to 10-feet out of the water. It was one of the first saltwater species to be declared a game fish.