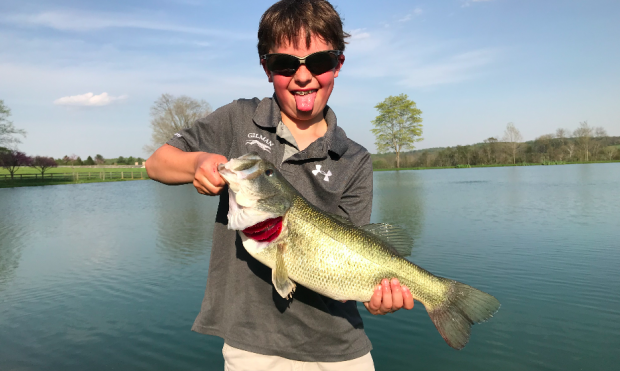 All about largies – Micropterus salmoides 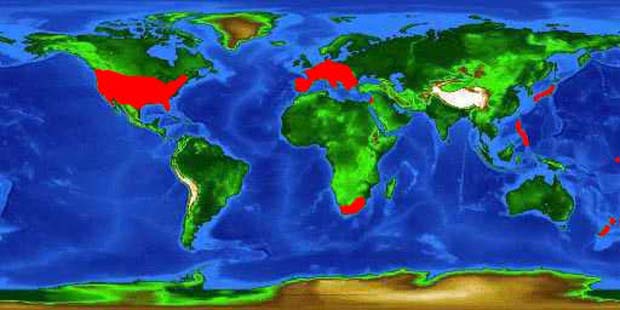 This bass is one of the most widely distributed fishes in the world. This is due in large part to the popularity of bass as a sport fish which has lead to the introduction of largemouth bass populations into many areas where they are not native. Their current range includes the U.S., South Africa, Europe, Guam, Japan, Lebanon, New Zealand, and the Philippines. 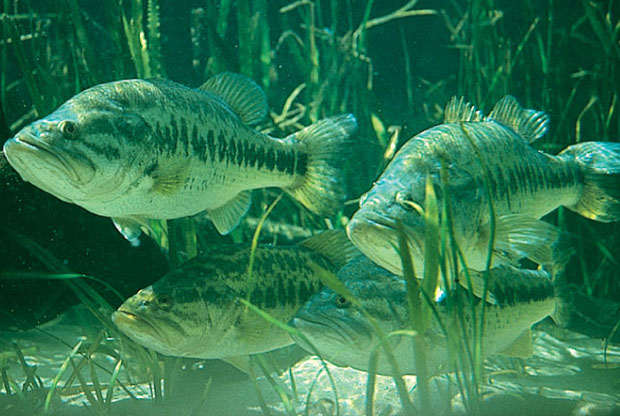 The bass can even be found in estuaries. It prefers weedy oxbows and clears floodplain lakes. Since it is generally a warm water (81-86°F). It is seldom found at depths of more than 18.8-feet. During the winter, largemouth bass generally will move into deeper waters. In the spring, largemouth’s migrate into bays that have warmed up sooner than that of the main body of water.

During the day, largemouth bass may cruise above aquatic plants at depths of 3.1- to 9.4-feet, or lie under lily pads or in the shade of overhanging trees, piers, or brush. In the evening hours, largemouth bass tend to move into shallow water to feed. After night falls, they return to deeper water, where they rest on the bottom under logs or trees. In cold temperate climates, largemouth bass generally move into deeper waters during the winter months followed by movement to warmer, shallow waters in the springtime.

The largemouth bass has a large, slightly sloping mouth. Its body is slender to robust, slightly compressed laterally, and oval in cross section. The corner of the mouth extends past the eye, hence its common name. 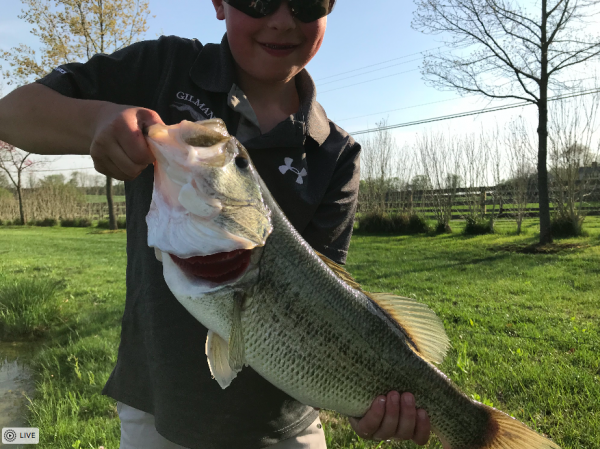 A large specimen on the fly for a young angler. Photo: B. Paternotte

The smallmouth bass, M. dolomieu, is another popular sport fish. It is restricted to a more northern range than the largemouth with its southernmost populations in northern Alabama and Oklahoma. The smallmouth bass may be distinguished from the largemouth by several characteristics including its bronze to brown coloration, its mottled pattern of dark bands, and its noticeably smaller mouth.

Other similar species found in regions of the southeastern U.S. include shoal bass (M. cataractae), red-eyed bass (M. coosae), and Suwannee bass (M. notius), while in Texas there is a population of the Guadeloupe bass (M. treculi). The mouths of all of these species are smaller than the mouth of the largemouth bass. These four species also tend to be smaller in length with the largest species reaching a maximum length of 18.5-inches. 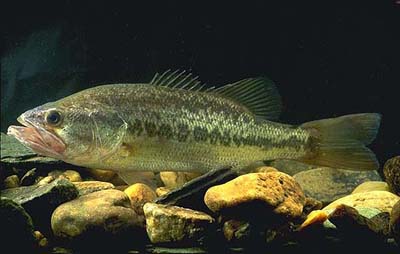 Largemouth bass are dark to light green in color with lighter sides and a whitish colored belly. Courtesy U.S. Department of Agriculture.

The back and head are dark green to light green in color with lighter sides and a whitish belly and underside of the head. A prominent lateral stripe may be seen running from the snout through eye to the base of the tail. Towards the tail, there is a series of blotches of varying size. These blotches evolve into a solid, even stripe on the caudal peduncle. The eye is golden brown. Vertical fins lightly pigmented, paired fins generally clear; caudal fin alike in young and adult. Adults from mud-bottom lakes are dark olive brown to black, with markings hardly distinguishable. Males in breeding condition tend to be darker in overall color.

The largemouth bass has well-developed pharyngeal jaws consisting of six major pads of caniform teeth in the upper pharynx and two pads in the lower pharynx. There are no teeth present on the tongue.

Largemouth bass may consume small fish, insects, mosquitoes, blackfly larvae, mayfly nymphs, worms, adult insects, mussels, crayfish, snails, tadpoles, frogs, small fish, salamanders, mice, turtles. In general largemouth bass feed at all hours, but most often in the early morning or late in the day. In some cases, the prey is not completely swallowed up initially; it is caught and held in the jaws and then it is sucked in.

The largemouth bass generally does not spawn at temperatures much below 64°F. Optimal spawning conditions is when the water temperature is around 18.9°. which correlates to between February (for the extreme southern end of its range) and July (in northern latitudes). The selection of nest sites by the male generally begins when water temperatures reach 60°F. The male largemouth bass begins the spawning process by clearing out a small depression in the bottom substrate. The nest are cleared in fairly shallow water on bottoms composed of sand, gravel, or pebbles. The male then attracts a gravid (egg laden) female and together they pass over his bed, releasing sperm and eggs. She may release from 2,000-145,000 eggs with much of this variation attributed to her physical size. Shortly after spawning, the female departs and the male is left to guard the developing eggs. The male will fast while he defends the eggs from predators and debris until they hatch 3-7 days later.

Upon hatching, young largemouth bass fry are transparent and 3 mm in length. After hatching, the young remain in the bottom of the nest until the yolk is absorbed from the eggs, which usually lasts a period of 6 to 7 days. They then rise from the nest, and begin feeding on zooplankton and schooling, where they are 5.9- 6.3 mm long and have changed color to become pale green. As young largemouth bass begin to grow, their diet changes to insects and other small fishes and then eventually switches to larger fishes, salamanders, crayfish, and a variety of other small organisms.

The largemouth bass may form hybrid fish by spawning with the smallmouth bass, rock bass, bluegill, warmouth, and black crappie. 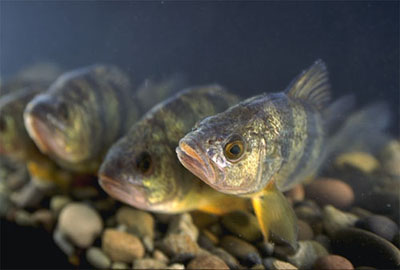 An enemy of the largemouth bass is the bass tapeworm, which attacks the reproductive organs, resulting in sterile bass. The ectoparasitic protozoan, Scyphidia tholiformis, is one of the most common parasites. The fungus Saprolegnia may attack dead eggs. Parasites such as protozoa, copepods, roundworms, tapeworms, flatworms and leeches are common in the largemouth bass.

Some surveys list bass fishing as the number one participation sport, while others place it in the upper five. According to U.S. Fish and Wildlife Service statistics, 43 percent of freshwater anglers fish for bass, 34 percent fish for panfish, 30 percent for catfish/bullhead, 30 percent for trout and 28 percent for crappie. Fishing is big business and a major American institution. America’s 30 million bass anglers are the basis of a $60 billion industry with one in every five fishing every year.

The largemouth bass is among the most sought after species of freshwater game fish in the world. Due to its broad range and popularity as a sport fish, numerous fishing methods have been devised to catch this fish. Among the most exciting methods of fishing for the largemouth bass involves using poppers which generate vicious surface strikes that are visible to the angler.

Time of day matters a lot – evening and morning times are the best times when fishing for the largemouth bass. The largemouth’s liking for heavy cover makes it a challenge to land. A hooked largemouth usually heads for the surface, opens it’s mouth wide and shaks its head and/or jumps in an attempt to throw the fly. Once that’s done, it will dive for cover and attempt  to wrap the line around logs, weeds or structure.

Largemouth bass flesh is moderately firm and has a mild flavor. If taken from lakes where the predominant cover is weeds, the flesh may have a grassy taste. 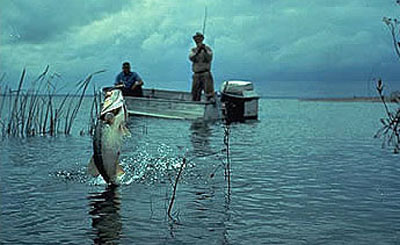 Fishing for bass, all brands, is extremely popular in the U.S. The largemouth variety the most popular of all.

Stick with catch and release and don’t hold the animal by the lower jaw and tip it parallel to the water. You’ll break the jaw. We need more fish not less.

The above was prepared by: Andrew Bridges and Cathleen Bester for the Ichthyology Dept. at the Florida Museum of Natural History in Gainesville, Florida.