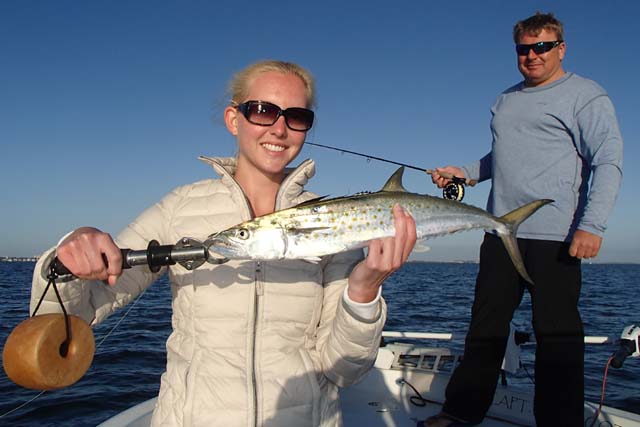 Spanish mackerel are found in the subtropical and tropical waters off North America and the Caribbean. They are locally found along the Atlantic coast from as far north as Nova Scotia (Canada) and south to Florida along the Gulf of Mexico (US). Florida is considered to be the area with the highest abundance of Spanish mackerel This species is also seen along the north coast of Cuba and throughout the Gulf of Mexico to the Yucatan Peninsula. It is replaced from Belize to Brazil by a similar species referred to as Scomberomorus brasiliensis. 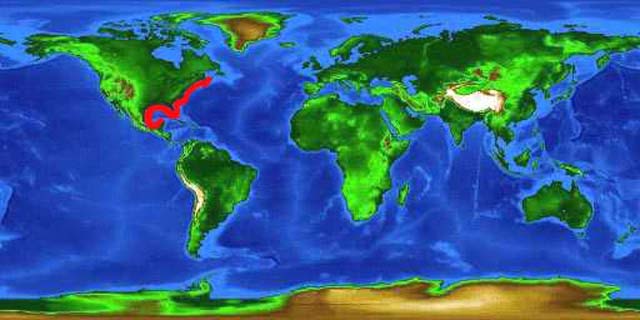 Spanish mackerel are epipelagic, residing at depths ranging from 33-to 115 feet. They are often found in very large schools near the surface of the water. They frequent barrier islands and the passes associated with these islands and are rarely found in low salinity waters. Spanish mackerel larvae occur mostly offshore while juvenile mackerels are found both offshore and in the beach surf.

Migrating over large distances close to shore, Spanish mackerel in the Atlantic Ocean follow the coastline northward during the warmer summer months and back in the autumn and winter months to waters off Florida. There are some populations of this fish in the Gulf of Mexico that migrate westwards in the early spring to waters off Texas. This species also migrates along the coast of Mexico southward between August and November and then northward again in March and April.

The Spanish mackerel has relatively large jaw teeth that are triangular and arranged in a single series. They are closely spaced and flattened from side to side. There are patches of teeth found on both the palatine and the vomer.

Spanish mackerel commonly grow to an average size of 8- to 11-pounds. The maximum reported length of this species is 35.8-inches fork length (FL). Juvenile Spanish mackerel grow rapidly and then start to slow as they reach age 5 for males and age 6 for females. Size at sexual maturity varies between areas and sex. The oldest Spanish mackerel sampled was 11 years for females and 10 years for males. IGFA all tackle record is 13-pound (Ocracoke Inlet, North Carolina, 1987) and fly fishing is 12-pounds (Fort Pierce, Florida, 1984).

The diet of adult Spanish mackerel consists primarily of smaller fish such as herrings, jacks and sardines. This mackerel is also known to feed in lesser quantities on shrimp and cephalopods.

Spanish mackerel have separate male and female sexes which produce milt and roe (respectively) during reproduction. The gametes are broadcast into the water column and fertilization is external. Spawning most likely takes place between April and October depending on the latitude. Along the inner continental shelf of Texas, spawning occurs from May through September while in the waters off Florida spawning typically occures from July through September. In the more northern portion of its range, the Spanish mackerel spawns from August through September. The eggs are buoyant, round in shape and transparent. Hatching has been documented to occur within 25 hours at 79 degrees Fahrenheit. It has been reported that the larval stage lasts from approximately 0.12-0.51-inches total length (TL). The larvae feed on larval fishes such as carangids, clupeids, and engraulids as well as some crustaceans. Juveniles often utilize estuaries as nursery areas.

Adult Spanish mackerel are commonly preyed upon by larger pelagic fish including sharks and tunas as well as bottlenose dolphins while larvae and juveniles are fed on by other immature fishes such as dolphinfish and tuna.

Spanish mackerel support very extensive commercial and recreational fisheries in the U.S. because of their high food quality and the fish’s fighting ability. Most fishing for this species occurs along the Atlantic coast of the US and in the Gulf of Mexico. Recreational fishermen in Florida are allotted 15 Spanish mackerel per person per day with a minimum size limit of 12-inches FL. Spanish mackerel are caught primarily with purse seines and on line gear. It is consumed as fresh, frozen and smoked by humans although the flesh easily becomes rancid in less than three months when frozen. Currently, frozen Spanish mackerel is treated with antioxidants and EDTA (ethylenediaminetetraacetic acid) which is used as a preservative.

The Spanish mackerel is not currently listed on the World Conservation Union (IUCN) Red List. The IUCN is a global union of states, governmental agencies, and non-governmental organizations in a partnership that assesses the conservation status of species.

Prepared by Michelle Press: Icthyology Department at the Florida Museum of Natural History

NOTE:  Part II will be Next Wednesday’s Fish Facts – how to fly fish for Spanish macks