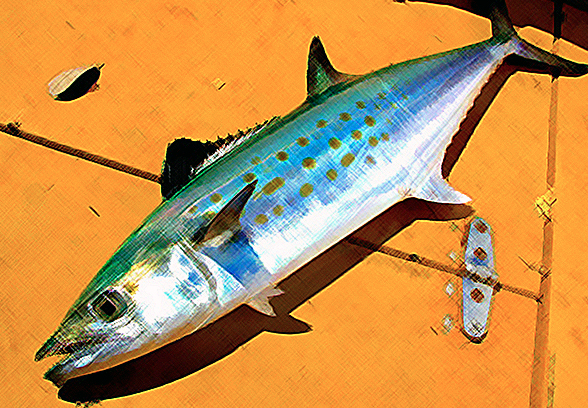 How to catch Scomberomorus, maculatus (Spanish mackerel) on a fly when the  “Spanish Armada” arrives

By Skip Clement and photos by Steve Kantner

[dropcap]T[/dropcap]wo groups of Spanish mackerel enter Florida waters, both on a seasonal basis. An Atlantic group migrates from Miami in the early spring, to as far north as Cape Cod, Massachusetts. This group’s highest concentration during the summer months is from North Carolina to the Delmarva Peninsula. These fish move south again in October. A second group inhabits the Gulf. The Eastern-Gulf group moves north along the west coast from the Keys, beginning in late winter or spring. They reappear in April off West Central Florida, and continue on to the Texas coast. Then, they reverse their route in the fall, and return to winter near the Florida Keys.

A meal on wheels for Spanish macks.

The Gulf group spawns in batches from May to September off shore Texas, and off the Gulf Coast of Florida, some years as early as April. The Atlantic group spawns – starting in April – off the Carolinas, and from late August to late September in the northernmost part of
its range.

Every fall, Spanish mackerel schools head south to where they’ll spend the winter off both Florida coasts. While the majority of “spotted speedsters” weigh 6-pounds or less (IGFA World Record – All tackle is 13-pounds – 1987 Ocracoke Inlet, North Carolina / IGFA World Record – fly fishing is 1984, 12-pounds, Fort Pierce, Florida), they hit like trip hammers and run like rabbits. That, along with their varied menu (they feed on shrimp and practically all small baitfish) endears them to fly fishers from Cape Canaveral to the Keys, and from Florida’s Big Bend south to Chokoloskee. Their great-tasting fillets are an added bonus.

An excellent way to meet these torpedoes is in the company of an experienced guide. He’ll know where they gather and how to find them – which may involve nothing more than scanning the horizon. “Skyrocketing” fish or diving birds are good indications that you’ve located a school, and that it’s time to get ready for action. While some captains drift, most of them anchor – in the crowded conditions that accompany these fish. A typical strategy, once you’ve managed to find them, requires that you entice them to the surface.

That’s usually accomplished with the aid of chum, and nothing works better than a handful of glass minnows (bay anchovies), except possibly a scoopful of tiny live pilchards. When the chum hits the water, the fish come a-running to within easy reach of an “average” caster. Chum, although, helpful, is by no means a requirement.

In its absence, a sinking line helps. Just allow your fly to sink for an eight-count (depending on the water depth), before beginning a fast-strip retrieve. There’s no such thing as stripping too fast – not when these fish are actively feeding. Sometimes, larger individuals hang beneath the schoolies, so occasionally let your fly sink longer. While Spanish hit hard, and frequently hook themselves, you may get multiple strikes on the same retrieve. So if you lose the first fish, just keep stripping. 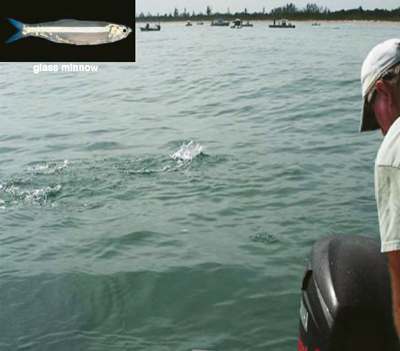 Capt. Andreson stays south of the mob at Pecs Lake (Palm Beach Couny, Florida). When the action slowed around midday, we used chum; it worked to perfection. The action didn’t stop that day, but we did.

You can bet that others will see your fly – ones that follow hooked fish to the boat. Since macks are known for their blistering runs, avoid tangling your fly line by clearing the deck. Point your rod at the fly before starting your retrieve, and continue stripping until you feel that hook-up. Here’s another trick that works in a pinch:

If the current is strong and you happen to be chumming, you needn’t cast again when your fly nears the boat. Instead, keep as much of your line in the water as possible, while you feed it down-current by wiggling your rod – which helps pull the line through the rod guides. With this technique, you’re not trying for distance – only getting your fly to the strike zone. Then, as soon as your fly arrives on target, it’s time to begin your retrieve.

If there’s anything you can count on when fishing the ocean, it’s wind and/or current, or that the boat will be moving while it’s riding at anchor. Meanwhile, a drifting fly is constantly “fishing,” so strikes can occur before you start to retrieve it. When the Spanish are “on,” it’s a fish a cast. But keep in mind those razor-sharp teeth that can inflict a substantial wound.

In a feature by Mike Conner “Make Mine a Nine” champions what we believe to be the ideal rod for Spanish. Yes, a 7- or 8-weight may work fine most days, but add wind to the equation and you’ll miss that “Nine.” Plus, the 9-weight is more-practical for the big jacks and sharks that occasionally visit your chum line. 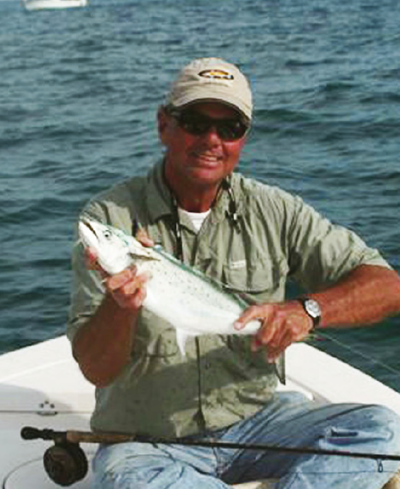 First cast, Steve Kantner starts the day off with dinner cinched. Looking north, that’s Peck Lake, a favorite spot for Spanish mackerel.
An armada of boats will be there from late October to whenever the Macks head north in the early spring or late winter.

Our choice in fly lines? A clear intermediate full-sinker (Scientific Anglers Mastery Series Bonefish or RIO’s Saltwater Tropical intermediate). When the macks are up, and birds are diving, it’s the one that will be your star performer. Floating lines are okay, too – if you’re using a popper. But the intermediate offers more versatility, which allows you to access more of the water column. Sometimes, however, you may have to dredge, and then a fast-sinking line (RIO, Scientific and Jim Teeny make excellent fast sinking fly lines) is the better choice – for getting your fly down 10 feet or more.

Your choice of a leader isn’t all that critical, but I find the shorter ones better when I’m fishing the ocean. Then, in deference to the mackerel’s teeth, you’ll probably want to include some form of protection. You can buy pretied leaders or the knotless version, each with a wire bite guard. (Climax 98 Saltwater Leader; Bluefish/Cuda or Bite-Guard – Pike/Cuda/Shark from Scientific Anglers). If you have an aversion to single strand wire, and you tie your flies with a bare shank, use a 6- or 7-foot length of 30-pound mono joined to your butt section with an Albright Special, and connected at the opposite end to an 8-inch long, 50-pound fluorocarbon shocker. If you’re looking for an IGFA World Record, then get the book (www.igfa.org) and study their rules.

Now, as far as choosing a reel:

While hooked macks leave the scene like a rocket, they tire quickly and are no threat to drag systems. So there’s no real need for expensive reels. That said, a good quality, large arbor reel makes sense in the salt. The large arbor lets you recover line faster – always an advantage in salt water fishing.

Spanish, as a rule, are voracious feeders, so most any streamer will work in a pinch – as long as it’s not too large or bulky. A 1/0 long shank hook (Mustad 34011 or similar) dressed with a green and/or white synthetic wing, or all-white Clouser Minnow or Lefty’s Deceiver fills that bill – especially if pilchards or herring are present. And there’s no such thing as too much flash, as evinced by the popularity of glass minnow patterns (super-skinny silhouette, with silver sides) along both Florida coasts. 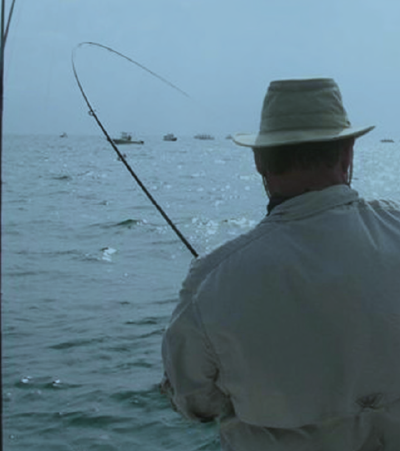 Publisher Skip Clement fishing for 5-pound Spanish mackerel’s with his trusty decades old RPL 10-WT, which landed a 119-pound sail in Panama, 56-pound king salmon in Alaska, 28-pound “barred” peacock bass in an Orinoco River feeder river, 33-pound Atlantic salmon in Iceland and a 56-pound yellowtail (kingfish) in New Zealand. That old RPL rod has outlasted three reels, and will probably out last Skip. Life warranty – none for Skip or his RPL.
The RPL rod probably “made” Sage.

When Capt. Steve Anderson of Port St. Lucie (andsteve1@bellsouth.net) ties flies for macks, he does so with the head just ahead of the hook bend – in order to prevent or minimize cut-offs. He considers eyes and frills to be non-essential, unless he intends to weight the fly. The exposed shank precludes the need for a bite tippet, and reduces the weight of the fly in the process. That, in turn, makes casting easier and reduces the chances of hooking yourself.

When the bite is on, flies have an extremely – short life – a reminder to always carry a surplus. You’ll find days, however, or should I say noontimes, when the fish are lethargic and reluctant to hit. That’s when a few anglers I know switch to a popper, which they simply toss out and allow to sit. Meanwhile, some anglers insist on erratic retrieves (more so than with a Clouser or Deceiver), and their hookup ratios suffer accordingly – because the attacking fish push the popper away.

Spanish mackerel are just the ticket – for novice and veteran fly anglers alike. They’re typically available in shallowwater (sometimes as close as the curl of the surf). Then, they’re always great sport and a treat on the table. Plus, they’re the perfect inducement for beginning fly tiers, who tie to re-stock their fly boxes. Flies are a lot less-expensive than hardware, and they’re every bit as effective. Since Spanish aren’t selectiveor boat-shy, they’re great for beginners, as well as purists – the latter who deserve some easy fishing.

Maligned for their oiliness – being too fishy, macks can easily overcome a reluctant dinner with this simple Jack Jones recipe.
1 cup Bisquick
⅓ cup cornmeal
1 tsp. salt
¼tsp. pepper
6 ounces beer
2 lbs fish fillets
Oil (for frying)
Cayenne powder to taste
Fresh lemon to taste
Note: Cut thicker fillets so that they’re not over 1 1/2-inches thick. The thinner filets will be better tasting.
Heat oil to 375 degrees F.
Combine dry ingredients; add beer to get a sticky consistency for dipping.
Salt fish; dip in batter. Deep fry until fish is golden brown. The crust will be light and fluffy.