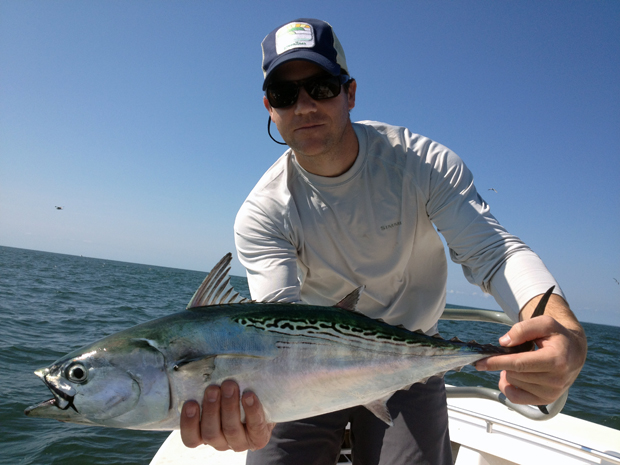 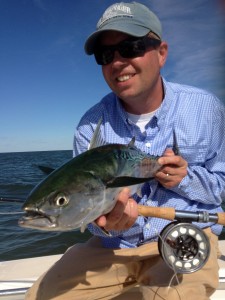 FLM contributor, Brooks Paternotte, with a nice specimen from the 2012 season.

The little tunny is found worldwide in tropical to temperate waters, between 56°N-30°S. In the western Atlantic Ocean, it ranges from Massachusetts (US), south to Brazil, including the Gulf of Mexico, Caribbean Sea, and Bermuda. It is the most common scombrid in the western north Atlantic. Other locations include the Mediterranean Sea and the Black Sea. 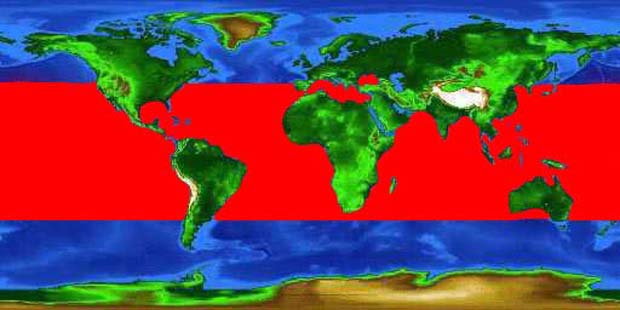 This fish is typically found in neritic waters, inshore over the continental shelf in turbid, brackish waters. Adult little tunny school according to size with other scombrid species at depths ranging from 3-490-feet. However, during certain times of the year the schools break apart with individuals scattering throughout the habitat. Juveniles form compact schools offshore.

The little tunny has a robust, torpedo-shaped body built for powerful swimming. The mouth is large, slightly curved, and terminal with rigid jaws. The lower jaw slightly protruding past the upper jaw. There are two longitudinal ridges on the tongue. Scales are lacking on the body except for the corselet and the lateral line. The corselet is a band of large, thick scales forming a circle around the body behind the head, extending backwards along the lateral line. The lateral line is slightly undulate with a slight arch below the front of the dorsal fin, then straight to the caudal keel. The caudal fin is deeply lunate, with a slender caudal penduncle including one short keel on each side. The first dorsal fin has high anterior spines giving the fin a concave outline, separated only narrowly from the second dorsal. Pectoral fins are pointed and short, not reaching to the end of the first dorsal; the pelvic fins are inserted just behind the origin of the pectoral fins. Swimbladder is absent.

This fish is steel blue with 3-5 broken, dark wavy lines, not extending below the lateral line. The belly is white and lacks stripes. There cIt is best identified by the dark spots appearing between its pectoral and ventral fins and “worm-like” markings on its back

Lower jaw protrudes slightly past the upper jaw; there is a single row of small, inwardly curved teeth with similar teeth on the palatines. Teeth are absent on the vomer and tongue.

Little tunny is an opportunistic predator, feeding on crustaceans, clupeid fishes, squids, and tunicates. It often feeds on herring and sardines at the surface of the water. The little tunny feeds primarily on pelagic fish.

Spawning occurs in April through November in the eastern and western Atlantic Ocean while in the Mediterranean Sea spawning takes place from late spring through summer. Little tunny spawn outside the continental shelf region in water of at least 77°F, where females release as many as 1,750,000 eggs in multiple batches. The males release sperm, fertilizing the eggs in the water column. These fertilized eggs are pelagic, spherical, and transparent, with a diameter of 0.8-1.1- mm. The yolk is rich in black pigment and the egg is a light amber color overall. There is a single droplet of oil within the egg, adding to its buoyancy. Larvae, approximately 3 mm in size, are released 24 hours after fertilization, with the yolk being completely absorbed within the first 48-66 hours of life. The eyes are unpigmented at hatching, with pigmentation appearing 48 hours later. A small caudal spot is present. At sizes of 3.7-14mm, the teeth develop, the head becomes large, the snout long, and the fins develop. Juveniles from 14mm-17-mm in length take on the adult appearance with the body becoming more fusiform and elongate. 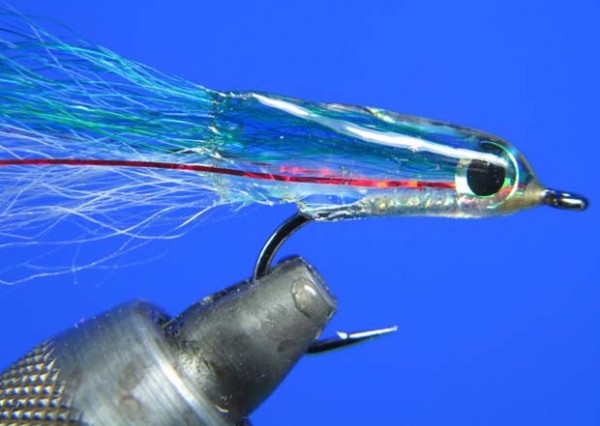 This fish is not listed as endangered or vulnerable with the World Conservation Union (IUCN). The IUCN is a global union of states, governmental agencies, and non-governmental organizations in a partnership that assesses the conservation status of species.

Fly Fishing for the little tunny:

When the albies show they’ll be up and then down. If you need more than one false cast you’ll have to be lucky because they’ll be up then  gone in seconds. Here’s some lyrics I heard years ago and they’re as true today as yesterday:

Usually when the littly tunny are around they’ll be mackerels with them or further north they’ll be with bluefish and stripers.

Mackerel don’t make much of a disturbance and they’ll often jump, but little tunny will make the water boil.

Little tunny are a perfect match for a 9-weight fly rod with a sink-tip and about a 6- or 7-foot leader – straight 20-pound test fluorocarbon. The reel will have to hold at least 200-yards of backing and the drag system working perfectly. The little tunny is a powerful swimmer. If macks are around you need to add number 4 wire with a haywire or figure eight to the fly and an Albright to leader.

Albies are not fussy eaters so any bait pattern that mimics what’s out there will work fine, but size does matter. If the albies are keyed-in on a certain size and your pattern is too big or too small – it won’t get eaten. You  can’t go wrong with Lefty’s Deceiver white with a little chartruese and little flash or Bonito Bunny in White. And don’t forget the anchovies.

Largest Little tunny caught on a fly / IGFA rules was 19-pounds, 9-ounces, Cape Lookout, North Carolina in November of 2000. Most all of the other records are from Key West.