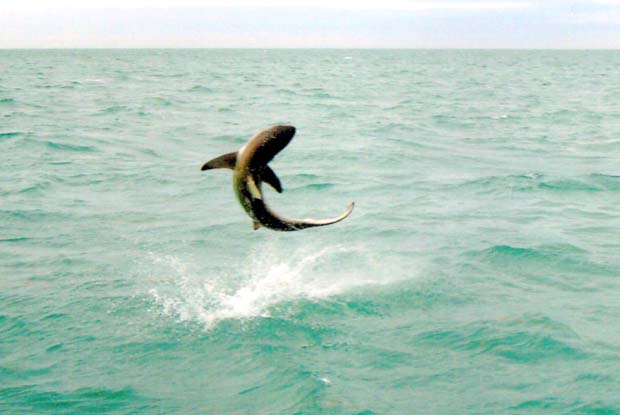 [dropcap]A[/dropcap]few years ago Grant Gisondo wrote a story for us about spinner sharks. He has become very capable at catching them on a fly. 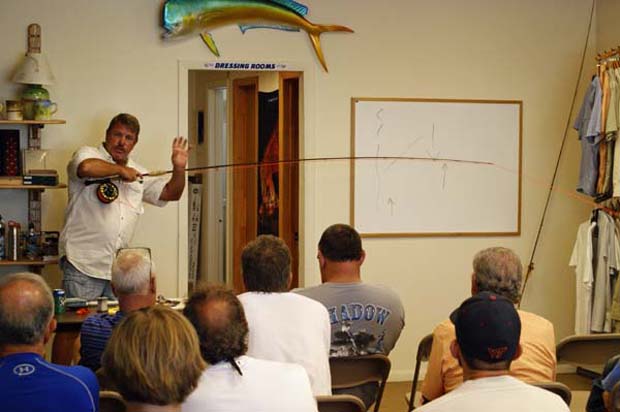 In December of 2012, Grant, curious about spinners, spent an afternoon with a dozen or so other angling enthusiasts at Darren Selznick’s Ole Florida Fly Shop. They were there to listen to Capt. Scott Hamilton show and tell what he knew about catching spinners on a fly. Scott is renowned for his knowledge on that subject. Grant says: “He virtually invented the techniques and flies and is credited by every legitimate area captain as the guru of spinners on a fly.”

As Norman Duncan (inventor of the Duncan Loop – sometimes misnamed uni-knot) and Capt. John Emory (deceased legendary Keys guide) found out in the 1960s; if you want to catch a shark you can use any color fly you want as long as it’s got a lot of orange in it.

FLM: Scott, what’s the set up for spinners, I mean leader to fly, including the fly?

Scott Hamilton: “First, they like big, bright flies. Mullet type patterns in grey/white/silver, red/white, red/yellow, and in orange/yellow in 6- to 8-inch long. Use a 12-weight rod? Believe me, you’ll have your hands full with a twelve. And forget IGFA legal leaders – 20-pound tippets just won’t do.”

Scott added: “The leader setup that seems to work best is 50-pound monofilament butt section about 5-feet long tied to a 4-foot section of 40-pound mono. Tie this to a 12-inch piece of 50- or 60-pound single-strand stainless steel wire using an Albright knot. Attach the fly with a haywire twist and your set to go.”

Offshore, you’ll generally be fishing for them in 20- 30-feet of water and probably no further from shore than a few football fields out. Sometimes they’re right in the surf – a few feet from the sand or just outside the breakers. In the latter two modes – they’re feeding for sure. 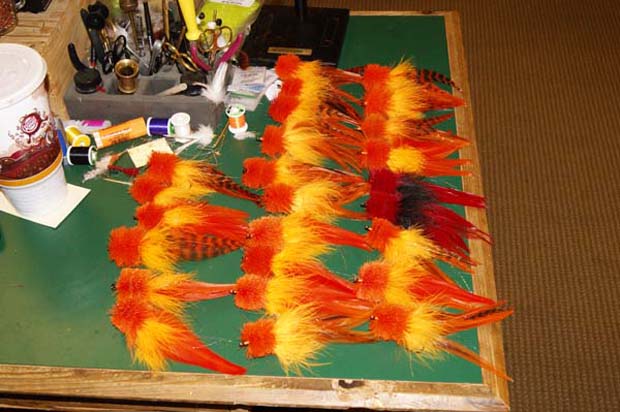 You can use any color fly to catch a spinner, as long as it’s orange. Flies are 6- to 8-inches long and bushy. Grant Gisondo photo.

You can use partially filleted fish to attract them, but Scott says the most fun way to engage a spinner is when it’s in a feeding profile and just beyond the breakers.

FLM: How, with a fly, do you approach or rather, cast to a spinner?

SH: “While they don’t like boats, after quietly riding at anchor for a short while, they tend to ignore the boat and go about their hunting. You can then throw flies well ahead of them and as the shark comes in close, start twitching it along. . . . you need to be able to throw at least 50-feet of line. If the shark sees the fly,  they rush it, take several quick passes to check it out, and then just blast the fly, and they tear a hole in the water the size of a station wagon when they do this. This all happens VERY fast. When they decide it’s time to eat, they eat.”

Hint: You don’t want to bang the fly right on top of the spinner, you want it to find the fly.

FLM: Scott, you hear a lot about bowing to spinners, but is it a factor with merit?
SH: ”No. I’ve done it both ways, come tight and stay tight and free spooled. There’s no difference in success or failure. When the spinner  spins your leader gets tucked around a cuved body whether it’s a free spoooled line or a tight line. When they hit the water –  that’s when you’ll likely get a leader line snap.”

FLM: I read and hear that the spinners are here to feed, follow the bait. Is that true?
SH: “Nothing could be more wrong. I laugh everytime I hear a guide say the spinners are following the bait. Pure drivel. Yes, they’ll feed because they have to live, but they’re here for one reason only. To breed.”

FLM: Scott, what’s the modus operandi when a spinner is hooked?

SH: “This is the remarkable part of story – the strike from a spinner can rip the rod out of your hands. If this doesn’t happen, the shark gives you, oh, about 3/1000th of a second to enjoy your success before the first spinning leap. Make it through that and next on the agenda is a mad dash between 50 and a 100 yards, usually combined with several high speed direction changes, punctuated with another spinning leap. Maybe two. If the shark finds these tactics haven’t freed it, the next tactic that comes out of its bag of tricks is a long, screaming run at the end of which is, of course, another jump. If you’ve made it this far, you stand a very good chance of seeing this shark up close and personal. The fight is not over by a long shot. Pumping him back to the boat will take a while even if you chase him down. Plan on a couple more runs and jumps. All in all, a typical fight, if there is such a thing, lasts about forty minutes. By the way, you probably won’t be able to retrieve your fly. For one, it’s dangerous and two, it’s probably destroyed.” 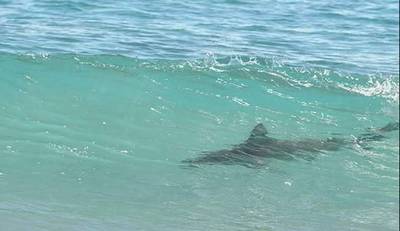 A spinner right in the surf – maybe 6-feet away from the sand.

Why do they spin?

Lots of theories on that one: lose parasites, lose small fish that attach them selves to the spinner underbelly or create a vortex as it returns to the water  – disturbing the swimming ability of bait so it can become table fare.

But a more likely explanation is that it’s just an unusual method of feeding – swimming rapidly through schools, spinning along the axis of its body. The shark snaps in all directions at the quickly scattering fish, followed by leaping out of the water.

The spinner shark is found in the western Atlantic from North Carolina  to the northern Gulf of Mexico and the Bahamas. This shark has also been reported in waters around Cuba. It also resides from southern Brazil to northern Argentina. In the eastern Atlantic Ocean, it is found from Spain to Namibia, including the southern Mediterranean Sea. In the Indo-West Pacific, the spinner shark is found in the Red Sea, south to South Africa, eastward to Indonesia, northward to Japan, and then south to Australian waters.

The world record is currently from Port Aransas, Texas weighing in at an All Tackle (IGFA) 208-pounds, 9-ounces and on a fly (IGFA) there’s no listing.

Distributed from inshore to offshore waters over continental and insular shelves, the spinner shark lives in subtropical regions primarily between 40°N and 40°S. Depth of habitat ranges from 0-328 feet. The spinner shark forms schools and is considered a highly migratory species off the Florida and Louisiana coasts and in the Gulf of Mexico, moving inshore during spring and summer months to reproduce and feed.

Although juvenile spinner sharks move into lower portions of bays with the tides, they avoid areas of low salinity.

Spinner sharks reach a maximum total length of 9.8-fee and a maximum weight of 198-pounds. However, the average size of these sharks is about 6.4-feet (1.95 m) and 123-pounds. Female spinner sharks mature at 5.6- to 6.6-feet and males mature at 5.2- to 6. 7-feet. Upon reaching maturity, the spinner shark grows approximately 2-inches per year, reaching maximum size at 10-20 years of age. This species is generally smallest in the northwestern Atlantic and largest in the Indian Ocean and Indo-West Pacific.

According to one study, the spinner shark grows approximately 8-inches during the first six months of life in waters off the Florida Atlantic coast. 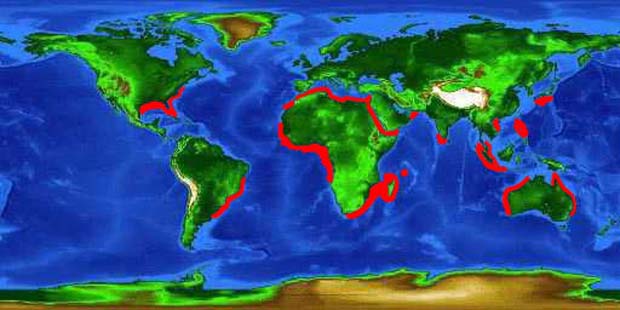 Spinner sharks are “viviparous,” or livebearing, with embryos nourished by a yolksac-placenta. The gestation period lasts 12-15 months with birth occurring at inshore locations during the summer months for stocks located off North America. Stocks located in the Mediterranean move inshore to give birth during summer off the North African coast. Litter size is from 3-15 pups, each measuring between 24-30-inches in length. The pups immediately move into shallow estuarine waters for protection from predators and readily available food sources.