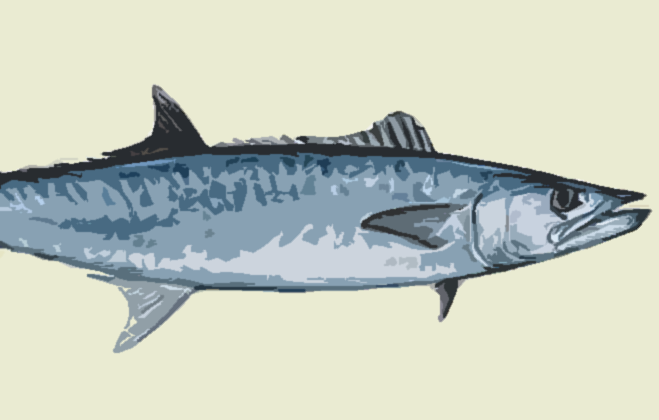 Wednesday Fish Facts: The mighty kingfish will test your strength

[dropcap]L[/dropcap]ike other scombrids, the king mackerel is elongate, compressed and torpedo-shaped. It grows to 3 – 5.6-feet in length and weighs as much as 99-pounds. Body color is typically dark blue to black dorsally, with iridescent areas of blue and green.  The sides are silver to whitish in color.  Young specimens are marked laterally with yellow to yellow-orange spots, which fade as the animal matures.  Two dorsal fins are present, separated by a deep notch between them.  A series of 7 – 10 finlets (usually 10) lie posterior to the second dorsal fin and to the anal fin on the ventral surface.  The lateral line curves sharply towards the abdomen just below the second dorsal fin.  The caudal peduncle is thin and has a fleshy keel.  The caudal fin is lunate.  The entire body, with the exception of the pectoral fins is scaled. The mouth is large and set obliquely, with the maxillary reaching to just below the orbit of eye.  The jaw bears 30 triangular teeth on each side. 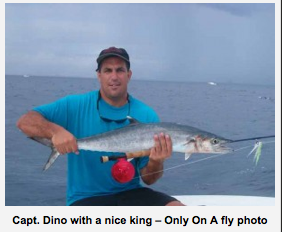 King mackerel are primarily found in offshore waters to the edge of the continental shelf.  They sometimes occur nearshore in the vicinity of inlets.

The king mackerel inhabits coastal waters from the Gulf of Maine south to Brazil, including the Gulf of Mexico and the Caribbean. However, the coastal area between Maine and northern Florida is utilized only during the warmest summer months. They are not typically common inside the IRL or other inland waterways, except near inlets.  However, large groups of king mackerel aggregate in the nearshore and offshore waters off east central Florida from Cape Canaveral, Sebastian, Fort Pierce and Jupiter Inlets. Found in the western Atlantic Ocean in tropical and subtropical waters, it ranges from Maine in the U.S. to Rio de Janeiro, Brazil, including the Gulf of Mexico, and is common around south Florida in the winter months. This migratory species is constantly on the move. Stocks wintering in Florida migrate as far west as Texas and as far north as Virginia during the summer. It also occurs around south Florida in the spring and early summer months.

A coastal, pelagic, schooling species, it is usually found in waters of 10 to 20 fathoms (1-fathom is 6-feet). Occasionally it may be caught from ocean piers and around inlets. Congregations often occur around wrecks, buoys, coral reefs, and other such areas where food is abundant. Schools vary in size and the largest individuals are usually loners.

This is an important species, both commercially and as a sport fish. Fishing methods include trolling or drifting either deep or on the surface using strip baits, lures, or small whole baits as well as casting and live bait fishing. Balao, mullet, jacks, herring, pinfish, croakers, shrimp, spoons, feathers, jigs, and plugs have proven effective under various conditions, as have such combinations as feather strip bait and skirt strip bait. Chumming works well to attract and hold these fish. 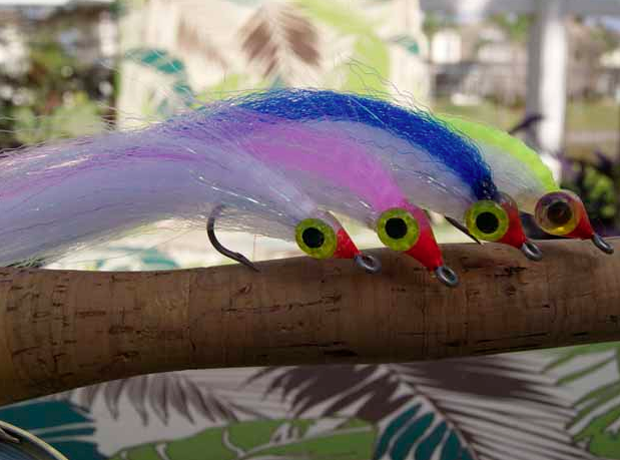 These flies tied by Grant Gisondo are specific for kings. They’re 6- to 8-inches long. Note the large eye sizes.

Kings are an offshore fish and you’ll wise to carry at least two rods. Kings are rod busters. Our offshore fly fishing contributor and and boating expert, Grant Gisondo, carries a 9-weight and a 10-weight when kingfish are targeted.

Grant says: “The leader is a simple setup; starting with 6-inches of 50-pound mono with a loop, tie about 5-feet of fluorocarbon in anywhere from 20- to 40-pound test to the mono loop using an Improved Clinch Knot (some captains prefer a loop to loop connection), then tie the fluorocarbon to an 80-pound test swivel using an Improved Clinch Knot – followed by 6- to 8-inches of either #4 to #6 coffee colored stainless steel wire bite guard (#4 wire is rated at around 38-pound test and #6 at around 59-pounds). The wire and is tied to the swivel with a Haywire Twist and the fly is also attached to the wire using a Haywire Twist. Kingfish have razor sharp teeth so the wire tippet is an essential ingredient. If I’m alone on the boat I find that with a 6-foot leader, as compared to say a 9-foot leader, makes landing fish much easier.”

Big 6- to 8-inches long as shown in image above.

Grant says: “Cast about 20- to 30-feet up current and peel out 80- or 100-feet of line. Once the line becomes taught against the drifting boat, begin the retrieve. You’ll need to find out at what speed the fish will strike. It won’t be the same everyday – so vary your retrieves when you begin each outing.”
Read Grants full story on fly fishing for kings.

Species information and taxonomy provided by the International Game Fish Association  and the Smithsonian Marine Station at Fort Pierce.