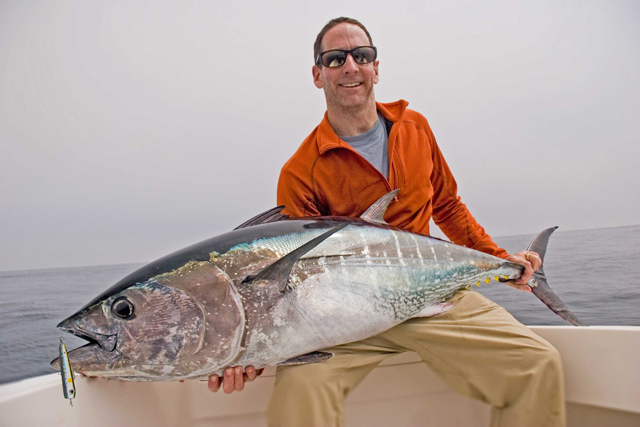 [dropcap]B[/dropcap]luefin are the largest tuna and can live up to 40 years. They migrate across oceans and can dive more than 4,000 feet. Bluefin tuna are made for speed: built like torpedoes, have retractable fins and their eyes are set flush to their body. They are tremendous predators from the moment they hatch, seeking out schools of fish like herring, mackerel and even eels. They hunt by sight and have the sharpest vision of any bony fish. There are three species of bluefin: Atlantic (the largest and most endangered), Pacific, and Southern. Most catches of the Atlantic bluefin tuna are taken from the Mediterranean Sea, which is the most important bluefin tuna fishery in the world. 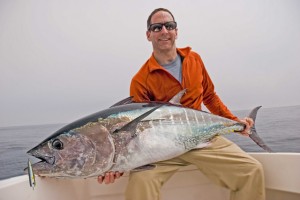 Physical Description
Adults are typically 3m in length, but can reach 4m, making the Atlantic tuna one of the largest bony fishes and the largest of all tuna species. Adults average 130-680kg, although the upper weight range is rarer now.

Bluefin tuna are built like torpedoes. Not only do they have a hydrodynamic shape, their pectoral (side) fins can be retracted and, unlike other fish, their eyes are set flush to their body. This means their bodies create little drag as they swim through water.

These 2 populations are not completely separate, however. Adults and juveniles from both populations feed together, particularly off the east coast of North America and in the central Atlantic.

Reproduction
Atlantic bluefin tuna spawn just once a year and do not reach reproductive maturity until they are 8-12 years old. This makes bluefin tuna more vulnerable to overfishing than some of the smaller tuna species that can spawn several times in a year. Female Atlantic bluefin can produce up to 10 million eggs per year, but just a small fraction survives to adulthood.

The Atlantic bluefin is a highly sought-after delicacy for sushi and sashimi in Asia—a single fish has sold for over $1.75 million! Driven by such high prices, fishermen use even more refined techniques to catch tuna. And the fish are disappearing as a result. Although tuna do provide food and livelihoods for people, they are more than just seafood. Tuna are a top predator in the marine food chain, maintaining a balance in the ocean environment.