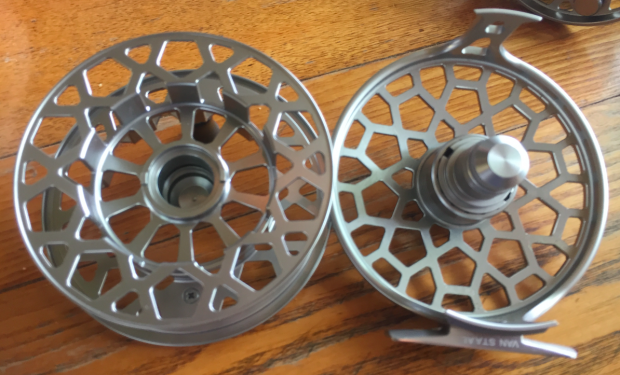 [dropcap]T[/dropcap]he original Van Staal C-Vex reels, introduced in 2000, were well designed and very popular with their stylish looks, modular spool integration and sealed drag system. So it is with baited breath that people have been anticipating the next incarnation of the fly reel by Van Staal. Known for extreme quality craftsmanship and excellent customer service, Van Staal has been dazzling anglers with their offerings in the spinning reel market and the fishing pliers market for years. With somewhat of a cult following, Van Staal’s releases get avid fisherman very excited, so it is with pleasure that they unveil their latest product, the VF Series fly reels. After the 2018 fly fishing show in Somerset, NJ, Fly Life Magazine reported that we had handled and been impressed with Van Staal’s latest incarnation of their fly reel. Now available, the VF series follows the success of the original C-Vex fly reels (year 2000). Offered in 6 sizes (3-12), these reels are some of the lightest in their class.

Craig Cantelmo explains that their goal of “engineering in strength while machining out weight” was achieved through innovation. Craig explains, “Unlike the C-Vex, this time we have chosen to machine the cartridge directly into the frame which in the end leads to greater rigidity when high drag settings create torque and that increases the strength and eliminates any additional threads or additional seals.” This innovation allows Van Staal to incorporate four radial bearings to be used to support the drag system plus the clutch, making that 5 bearings in total. The drag system is sealed to avoid the possibility of a free spool or other malfunction. Craig further explains the added value of the unique forging process they use, “The VF Series Fly Reels are the next generation of Van Staal reels that relies on a forged frame that increases the strength of 6061-T6 aluminum and eliminates any flex under increased drag load.”

They are extremely lightweight, with the 10 weight reel weighing in a hair over 8 ounces, while maintaining a durability and rigidity essential to their design. The 12 weight weighs less than a half ounce more than the 10 weight, coming in at 8.86 ounces. Right now there are no options on color. The smaller reels are gun metal and the larger reels are matte silver, which in my opinion resist visible scratching better than opaque reel colorings. When tightening the drag on these VF series reels, there is essentially no limit to the amount of drag you can apply to the adjustment knob. You can lock this reel down as hard as you will ever need to. With an o ring seal and a single lip seal, these reels have been dunked repeatedly during testing to maintain quality performance under any conditions. Craig Cantelmo running through the fine points of the design. Photo: A. Derr

Craig Cantelmo explains the rigors that the HD series went through fighting schools of blackfin tuna in Key West during testing. He is proud of the workmanship, the design, the strength, rigidity and the lightness that they have achieved with these reels. Craig’s excitement for this project is obvious, “The VF Series Fly Reels are engineered to not only be the most capable fly reel you own but the most fun to fish with!” The VF reels are manufactured overseas in the same facility that manufactures their stalwart workhorse, spinning reels. More to come on that front soon.

Having taken 2 different opportunities to learn the nuances of the design and construction of these reels I am struck by the massive amount of thought that went into the VF reels. They are available in sizes from brook trout up to tuna and tarpon. They are really pretty gorgeous to look at. They are light as can be and have a tremendous amount of stopping power. While light, they don’t feel fragile in the slightest. Something else that I often mention as an important component: they are backed by a company that has been and will be here for a long time, ensuring available quality customer service. Priced fairly, from $250-$550, the reels are likely to be a huge hit. Check them out at a dealer near you.