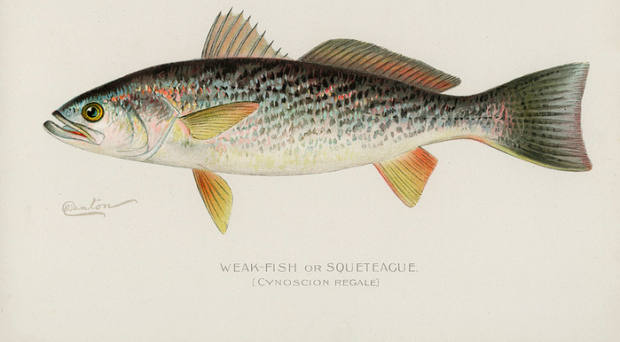 By Paul Greenberg for the Vineyard Gazette – August – 2018

[dropcap]T[/dropcap]he first time I fished for money I got burned so badly I never tried it again. My father had dropped me at Lobsterville Beach on an August evening back in 1979. All I had with me was a pole, two Rapala swimming plugs and a Hefty garbage bag. Hardly gear for a commercial-sized haul. But as the last bit of sun thinned out against Vineyard Sound there arose that quiet tingle that any fishing maniac recognizes as a harbinger of a good night to come. I could make out swirls and eddies near shore. I could hear the occasional slap of a tail on the water. And on my third cast the line drew tight with a pull I’d not felt before. Not a freight train opening run like a striper. Not a dogged zig-zagging like a bluefish. But something canny and unpredictable. Something that had to be played carefully lest the tender tissues in its mouth let go of the hook. Soon the fish breached, all five pound’s worth, lilac and speckled up top with bright yellow fins on the ventral side. A weakfish. I’d never seen a fish so jewel-like and valuable-looking. Before the night would end I would fill my garbage bag with six of them.

“Holy crap,” my father said when he collected me from Lobsterville, “what the hell are you gonna do with all that?”