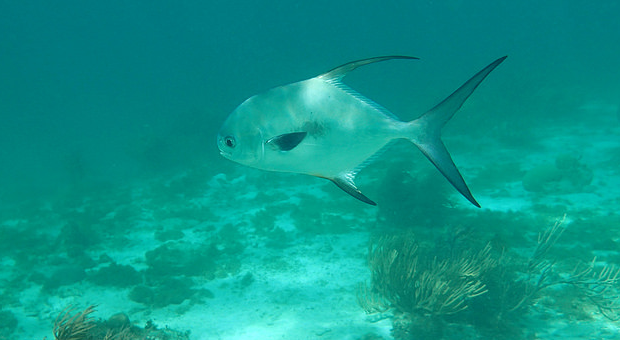 Why is permit on the menu at “hip” Miami eatery?

Anglers have fought to protect this fish. So how did it wind up on a Miami Beach menu? Backpedaling Top Chef contestant McGinnis condescendingly argues, “I know a lot about fishing, dear. Whoever it is who’s telling you [it’s a permit] doesn’t know what they’re talking about,” Renowned marine biologist, Aarron Adams, disagrees.

[dropcap]O[/dropcap]ne of Miami Beach’s cool new restaurants, a laid-back fish shack named for Biscayne Bay’s iconic stilt houses, aims to serve fish so fresh that its celebrity chefs claim much of the catch comes from the docks across the street.

Just one problem: A trophy fish that sport fisherman have long fought to protect wound up on the menu. By Dino Kanlic from Wikimedia Commons

“It’s like seeing marlin at the grocery store,” said Capt. Steve Friedman, commodore of the Florida Keys Fishing Guides Association. “In no way, shape or form should they be selling it in a restaurant.”

McInnis, a Top Chef contestant and founding chef behind Yardbird, another popular Miami Beach restaurant with downhome fare, at first said the fish was an African pompano, which can grow to a similar size, but more closely related to jacks, found around deep wrecks and less restricted.

“Whoever it is who’s telling you [it’s a permit] doesn’t know what they’re talking about,” he said. “I know a lot about fishing, dear. I’ve grown up fishing my entire life. I don’t do that kind of stuff.”

But Friedman and Aaron Adams, a marine biologist and chief scientist at the Bonefish & Tarpon Trust, both identified the fish as a permit.

“There’s no doubt that was a permit,” Adams said. “It’s great that local restaurants want to source locally for their seafood, but if they’re going to do that, they have a responsibility to do the research and understand the dynamics of the fishery and the produce that they’re sourcing from.”