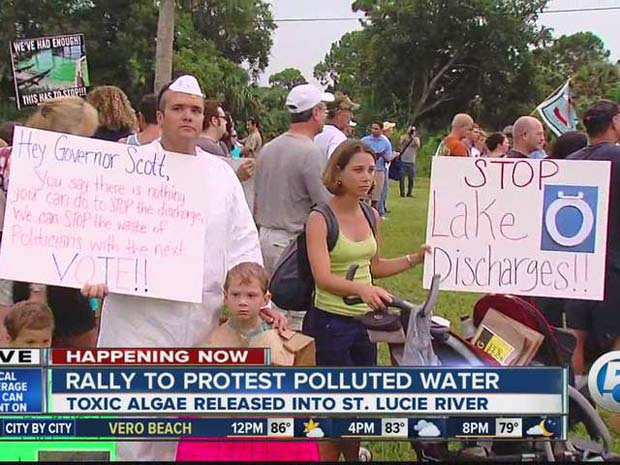 Conservation: Rally in South FL points to pollution by corruption

[dropcap]P[/dropcap]ollution in Florida’s major commercial and sport fishing industries on both coasts are reaching environmental tipping points. Planned runoffs from Lake Okeechobee (Lake O) by the South Florida Water Management District (SFWMD) into the St. Lucie and Caloosahatchee rivers, along with no management controls or standards of farm runoff along the way of both rivers, devastates fisheries. Here’s how it works. Big Sugar, a corporate welfare client that you and I unwittingly support, need lots of water to flower their highly fertilized (nitrogen-phosphate) cane fields. When excessive rainfall rises in the cane fields of Big Sugar, the excess water is dumped into Lake O and south into the Everglades. When the SFWMD decides to lower Lake O, the sugar polluted additive is discharged into St. Lucie and Caloosahatcee rivers and south into the Everglades. Along with unregulated farm runoff adjacent to both rivers, toxic black water devastates the rivers (and Everglades) marine animals, sea-grasses and terminal estuaries along with polluting the Gulf of Mexico and Atlantic Ocean. Last year pollution killed the mullet migration, an important event. The face of toxic water released from Lake Okeechobee into the St. Lucie River in Florida. Photo coastalanglermag.com.

The situation is so bad that a last minute rally to protest the situation of the dumping of highly toxic waste water into the St. Lucie gathered 6,500 or so concerned citizens in Stuart, Florida last Saturday. The protest of these citizens who love the St. Lucie River and Indian River Lagoon’s environmental offerings was adult-like. Attending were beach goers, environmentalist, home owners that live along the St.Lucie River, fishing guides (our former editor Capt. Mike Conner among them), canoeists, kayakers, divers, paddle-boarders, offshore captains and boaters of every stripe.

The impact on water quality, aquatic habitats, human health, recreation and the areas economy are threateningly dramatic. During the last month, billions and billions of gallons of dirty water from Lake O have gushed, and continue to gush, into both the Caloosahatchee and St. Lucie rivers’ estuaries, resulting in low salinity levels that are lethal to marine animals and sea-grasses. Toxic algae blooms are developing throughout the rivers and estuaries. It’s so dire that the Health Department has posted warnings throughout Martin County, Florida: Avoid contact with the water due to toxic algae and high levels of bacteria in the water. Essentially, the water that flows through the communities adjacent to the river and estuaries that attracts millions of visitors every year is now poisonous. The situation is unfavorable and projected to worsen.

A word about Big Sugar as welfare clients we support. Here’s how that works. Post Fidel, sugar was declared a nationally significant product and the Everglades farming of it was expanded significantly (48,200 acres to 440,040 acres by 1990 – McCally), and a subsidies program was installed that GUARANTEED grower-refiners a profit. While it is costly to all U.S. taxpayers who buys a product with sugar in it, the beneficiaries – just a handful of privileged families in Florida, do nothing to earn profits, but do cash their welfare checks . . . millions upon millions of dollars each and every year. Clean-up the tax code – start here!