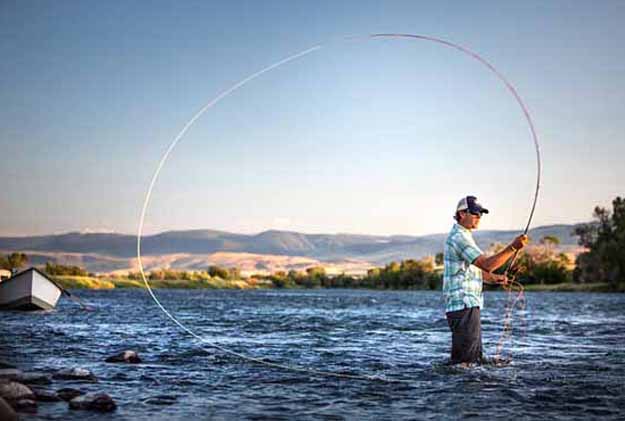 [dropcap]I[/dropcap]n 1899, the Commissioner of US patent office reportedly said, “Everything that can be invented has been invented.” A gilded age comment a little like those made by the herringbone tweed jacket anglers from the UK who influenced our pipe smoking club crowd into believing a short rod for small streams was the only solution – and any other thought on the matter treason. A hangover that persists with many today.

Uh oh, this could be heresy? Cover the childrens ears

Well, what about tenkara? Long rods (really long) for narrow mountain streams. The Japanese have been fly fishing tenkara for centuries, successfully.

Just the other day, in Gink & Gasoline’s Monday Blog, a guide friend of Louis Cahill’s wrote he discovered that longer rods were working better for his clients in small streams. Read more about the “discovery” Along with tenkara there are switch rods, the latter invented out of R. B. Meiser’s Oregon shop in the 1980s – these rods have been catching small stream trouts, respectively, for centuries and decades. Switch rods hit the industry running, then sort of faded a bit with intervals of revival, such as now.

Presently, not called switch rods but micro spey (Winston Rods) are all the rage again (micro spey=switch rods), but left out of this rediscovery is ad copy heralding their best performance capability – small streams.

So, what are the advantages of a longer fly rod on a small stream?

If you can think of using your 9-, 10-, 11-foot fly rod like a tenkara angler does, you’re already out-of-box and free to think. Remember, tenkara style fly fishing pre-dates the history “we” were taught about the origin of fly fishing.

1. You can high stick and drift thru fast water drag free – an 11-foot rod producing (obviously) better results than a 7-footer. Mending, an ever needfully employed moving water task is more easily performed (obviously) with a longer stick.

2. Roll casting with a longer rod produces (obviously) better results with regard to coverage. Again, a 10-footer better than an 8-footer.

3. A longer rod casts further than a short rod (obviously). And with noticeably less physical demand. Think all day.

4. The least skilled fly rodder has a much better chance of performing fish catching with a longer fly rod for the very simple reason he or she can better “feel” the rod load when casting.

6. A hooked fish on its escape route can be better fought with a 10-foot rod than a 7’6” rod. Think better rod fighting angle, especially advantageous on small water streams.

A contrarian will offer up that walking through the brush with a longer (11-foot) rod will get hung up. Yup, true. So, just break it down just like you would with that 8-footer. And of course, tenkara has a huge advantage over any conventional length fly rod.