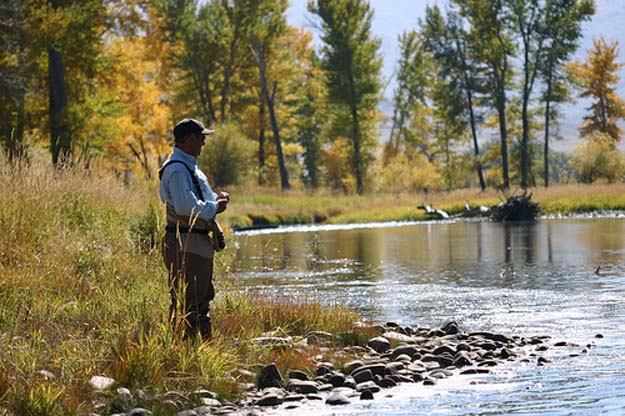 A fishing story. Me and Daisey

A day in our lives, fishing with Daisey

[dropcap]I[/dropcap] picked the last of the okra. Angie, my oft-times fishing partner, loves okra but she was in London so I froze them for her. In her absence, I would be sleeping with Daisey.

It was the fourth cool night in a row and the high for Tuesday would only be 58 F. The fishing report from the Blue Ridge coordinates we’d fish was that the water was still low, water temperature had dropped significantly, trout were acting stupid, and the private stretch of water Daisey and I’d fish would be free of anyone else on Tuesday. And no one had fished there for a week.

Daisey, a four-year-old New Zealand sheepdog and I got up early. I fed her and let her out to run. She was business like in the morning, no more than five minutes and she was back. After breakfast, Daisey cleaned my plate, finished off the burnt toast and we were off.

Daisey loved riding shotgun with the window down halfway. I had to turn the heat on and I don’t think she liked that. I got a look I brought my 9-foot 5-weight with RIO Gold WFF fly line and about 8-feet of knotless with a tippet ring tie-in of 3-feet of an 8-pound test tippet. My backup, a short stick Bass rod rigged up with Lazur running line and an OPST 175 grain Commando head, Polyleader (sink tip backup for deep) and a straight 6-foot run of 10-pound test tippet. Adding a sink tip would get my big streamers down. Today, the Scandi – Skagit thing is blurred by rod builds and fly lines from RIO, Airflo or Scientific Anglers. My set up created a great roll casting machine – effortless but kerplunk at any distance.

When we arrived, Bill, the caretaker, met us and showed us our Ebberly farmstead digs. Bill and I had coffee while Daisey scouted with Bill’s hound, a one year old mixed golden.

I got all the intel before heading off.

The Ebberly private water fishery looked like trout water. Stretches of really shallow water dotted with boulder patches set in long, deep pools. Angie’s family stocks their generations-old farm acreage water asset with rainbows that do holdover. I’ve never caught one under about 16-inches – 28-inches is the old record (1979). It was held by great, great Ebberly.

The rules are that you keep every “bow” you catch, up to a limit of 10 in one day. If you catch 10 by noon, you’re done for that day. It happens often. Anything else you catch is not part of that limit but has to be released “in the water,” all barbless hooks, and fly fishing only. Should you catch the days rainbow limit early, there are a number of nearby options so you’re never stuck.

The browns are not stocked nor are the occasionally washed down brookies. Bass are caught but I’ve never seen one. Angie said she catches one or two every year and many brookies in spring and summer storm runoffs.

Holes are the name of the game

The fishing is a walk in (just wading boots or wading boots and stocking foot hip waders), calf height or slightly higher water on the runs and way over your head in the pools. The widest part of the stream is the “runs” parts – about three lanes wide with some patches of it dry late season. Casting the shallow runs is affordable without too much catch the forest concern.

The pool sections are all constricted and the water torrents through them. You can get in on at least one side of all the pools. There’s very restrictive casting at the pools because of the forest, steep inclines, overhangs or all of the above. A perfect anecdote would be a 4-weight switch rod… that I don’t yet own.

As rigged, the Bass rod allowed almost complete pool coverage, but not always affording a good drift. The pools were difficult to fish, technically speaking.

Well, of course, the best fish of the day hit the three-inch tube leech almost on entry at a coordinate that promised nothing but a shitty drift. My brown immediately dove down and under the stone factory in front of me. The Lazur running line was instantly rubbing on a flat boulder. Fortunately, I was at the tail of the pool and able to crossover to the other side – a better fighting angle.

Without a net and a still frisky brown at my rod length, I attempted a breast pocket retrieve of my iPhone 6, but it met the water and became my third riverine iPhone 6 mishap in two years. The brown took advantage and unhooked itself, but kindly left the hook. As designed, the tube fly was not engaged in the melee – salvaged undamaged.

In the following hours, Daisy decided I was the better company and we hiked a bit, leaving my gear streamside and backpack tree hung.

We came back for a late noon snack – sharing a tuna fish sandwich and a few crumbled oatmeal cookies. Daisy pawed my arm to express ownership while we napped in the sun.

At around four or five o’clock (no phone to get time), we started fishing back toward the Ebberly farmhouse. I still had four bows I could catch.

Evening shade had enveloped a good portion of where we were fishing. The mountains treat light uniquely – the far side of the mountain was awash in sunlight and we were fast running out of fall light.

I targeted the shallow runs, pitching tube tied Wooly Buggers on the 5-weight: olive and chartreuse, dark green with pink, and then black with a lot of flash, viola – rainbow on.

Daisey loved sniffing, crouching as if herding, and barking at trouts. It was her belief that it was her responsibility in our fishing partnership

My casts on the runs were generally in riffles, drifting past larger rocks at under 40-feet in distance. My bites were generally about 6-feet after the rock swirls – just as it started to “V” narrow. I had my four bows in a matter of 40 minutes.

The water closes at 6 pm. Mint Juleps are served on the side porch at 7:15. You’re allowed one, which I’ve been told is more than enough. Daisey and I don’t drink so we just shared a steak. I’d forgotten her food. She chewed that bone to zero.

It was cold that night and we fell asleep on the leather couch facing the fire – never showered, never made it to the bedroom. Daisey said nothing, she never complains.