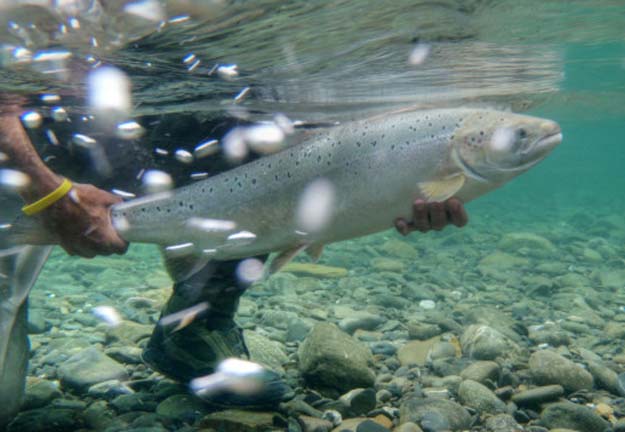 [dropcap]F[/dropcap]or the first time since the Atlantic Salmon Federation (ASF) began monitoring the Magaguadavic River fishway in 1992, zero wild Atlantic salmon have returned from the sea. It is a rapid drop that could not be arrested by a multi-year cooperative stocking program. In 1983, DFO estimated 900 wild salmon entered the river to spawn.

The loss of wild Magaguadavic River Atlantic salmon is another blow to the Outer Bay of Fundy population, considered endangered by an expert panel, although the federal government has yet to enact formal legal protection.

Atlantic salmon populations are affected globally by changing ocean conditions and overfishing, but beginning in the 1980s, the Magaguadavic was exposed to an additional threat as open net-pen salmon aquaculture developed rapidly in the Bay of Fundy, around the river mouth. Today the area has one of the highest concentrations of industrial salmon farms in the world. I, Alex Vye, took this photo of Magaguadavic River Gorge in St. George, New Brunswick, Canada. it is in “commons” for people to freely use.

As the industry grew, so did the number of escapes entering the Magaguadavic from compromised sea cages and streamside industrial hatcheries. Every year since 1994, except 2006 and 2011, more aquaculture escapes than wild fish have been counted at the Magaguadavic fishway.

This year is no exception. Despite industry investments in improved containment technology, 15 escapes have been removed from the trap at the top of the fishway. The most recent discovery by ASF researchers was October 3. Initial inquiries to the Atlantic Canada Fish Farmer’s Association indicate no known or reported breaches, even though the recent escapes may be evidence of a larger fish spill.

“Our experience tells us that only a small portion of escapes enter the Magaguadavic,” said Jonathan Carr, ASF Executive Director of Research and Environment. For example, in 2005 when vandals released 50,000 large salmon from a Cooke Aquaculture site near Deer Island, only 30 fish matching the description arrived at the fishway in St. George. Escapes have been documented in many other Bay of Fundy rivers, including the St. John at Mactaquac, more than 150km from the nearest cage site.

Studies have proven that escaped aquaculture fish have interbred with wild salmon in the Magaguadavic and throughout the Bay of Fundy resulting in a loss of local adaptation. It is widely acknowledged that aquaculture-wild hybrids are less fit for survival and the presence of escapes and hybrids among wild populations is associated with major declines.

It’s not unusual for the origin of escapes in the Bay of Fundy to remain unknown according to Carr. “In fact, 99% of the escapes we’ve recovered going back to 1992 are unclaimed, and in New Brunswick, there is no way to determine who is responsible,” he said.

“This can be improved. A few miles away in Maine, escaped salmon can be traced to their site of origin through genetic testing,” said Carr.

A regulatory analysis commissioned last year by ASF found New Brunswick and Newfoundland and Labrador have the weakest aquaculture regulations for the protection of wild salmon.

“The result of continued escapes from aquaculture cages into the Bay of Fundy limits the potential these rivers have for recovery of wild populations,” said Bill Taylor, President of the Atlantic Salmon Federation. “The Magaguadavic should be a cautionary tale. Throughout North America, no new open net-pen salmon aquaculture sites should be allowed in proximity to wild salmon rivers.”

The Magaguadavic River is a historic Canadian river located in the province of New Brunswick. The name “Magaguadavic” is a Maliseet/Passamaquoddy term that is believed to translate into “River of Eels.” It is most commonly pronounced “mack-uh-day-vick” or “mack-uh-day-vee.”

The Magaguadavic River is the sixth longest river in the province. It rises as an outlet of Magaguadavic Lake in York County, flowing south through a low coastal mountain range called the St. Croix Highlands before emptying into Passamaquoddy Bay, a sub-basin of the Bay of Fundy.

The river has 103 named tributaries and 55 lakes draining a watershed measuring 700 square miles.