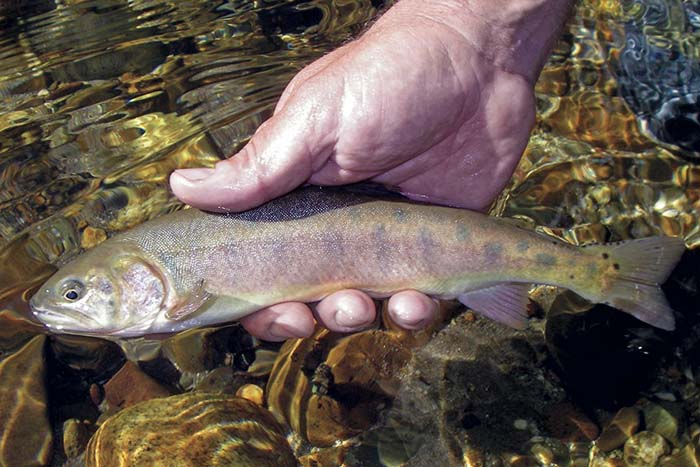 Paiute cutthroat trout glided through the cold water of Silver King Creek before they started disappearing in the 1920s. Photo by California Department of Fish and Wildlife. A commons image.

[dropcap]F[/dropcap]or the first time in nearly a century, a rare California trout species will swim in a mountain creek that is its native habitat, marking a major milestone that conservationists hope will lead to a thriving population and removal of its threatened status.

About 30 Paiute cutthroat trout will be plucked Wednesday from Coyote Valley Creek in the eastern Sierra Nevada wilderness and hauled in cans strapped to pack mules about 2 miles west into Long Valley. State and federal researchers will be on hand as the fish are dumped into a stretch of Silver King Creek at about 8,000 feet elevation, where the shimmering species glided through the cold water for thousands of years below a waterfall before they started disappearing in the 1920s.

The drought was a setback. Without snow cover in the winter at elevation, the stream literally freezes solid from the bottom up,” Somer said. “It’s a major problem for trout throughout the West.”

From 2013 to 2015, 11 miles of Silver King Creek and three tributaries were treated with a fish toxicant, rotenone, to remove all non-native species. That was the first step of the five-part recovery plan that could get the Paiute off the threatened species list within the next decade or so, Somer said.

Step two is Wednesday’s restoration of the species to its historic habitat.

The Endangered Species Act, which the Trump Administration is essentially doing away with, is credited with helping save the bald eagle, California condor and scores of other animals and plants from extinction since President Nixon signed it into law in 1973. The act currently protects more than 1,600 species in the United States and its territories. — Arnold klement