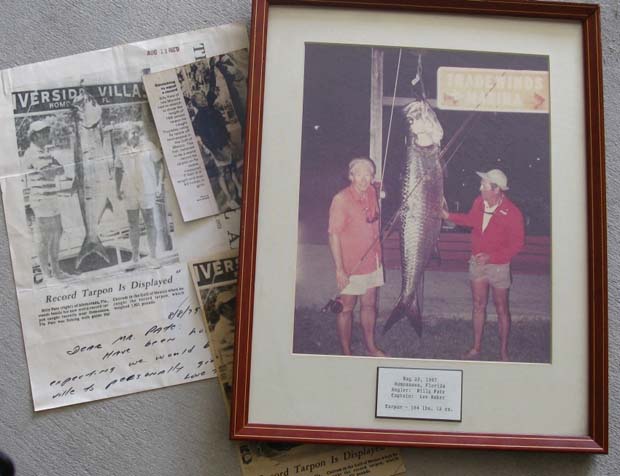 [dropcap]I[/dropcap]choose the long rod to pursue fish, I am a member of a fraternity of people who live with a passion for fly fishing and a love of a life more intensely lived. I do not see it as a game or a sport, I see it as a connection to the universe. Someone once said that there are matters of life and death, then, there is fly fishing. Passion drives people like me.

Billy Pate was a person who lived fly fishing so intensely that it is hard to imagine. 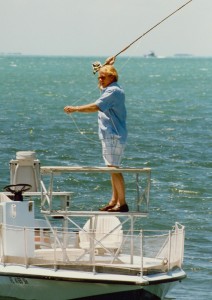 Billy Pate working his magic – note the casting platform arrangement he had built.

I must admit that I wish I new him better, there are many more qualified to write this remembrance than I. Cam Sigler, Sr., a dear mutual friend, introduced me to Billy. I had the privilege to spend three seasons getting to know him at his home in Islamorada, interviewing him for a feature I wrote in 2009 for this magazine titled “The World Wide Sportsman.” The first year was splendid – Billy told me his stories one after another and he let me rummage through his tackle room and look through his gear and flies, he uncovered his boat and climbed up into the forward platform. He showed me how he could operate the boat from his perch and have the best angles on the approaching fish. He talked like an excited kid, never with any hint of arrogance or superiority – almost with humility. The next season seemed a little different, a slight but perceptible confusion, we continued going through his adventures in the 40 different countries he fished and things that happened on distant continents, but just some of the details were fuzzy and unclear. In the winter between the second and third seasons I got a call from Cam telling me that he had recently talked to Billy and that if I wanted to finish my interviews, I had better move as he said Billy was beginning to deteriorate quickly.

When I arrived the child like vigor had gone and Billy was having trouble remembering even small details. What follows is the way I want to remember him.

Billy is a member of a pantheon of anglers that go back to the mists of time. There is a rare few who have dedicated themselves so completely. He has inspired a whole generation of younger anglers to go out and find the places in the world where they can do the undone, see what has never been seen, go where few have gone. For those, who like Billy Pate, are driven; their grasp exceeds their reach. Billy sought his whole life for the indo-pacific blue marlin and the 200-pound tarpon, both of which just exceeded his reach, close, oh so close but not quite in his grasp. As it was with Billy, it is these things that drive and inspire us to reach beyond our grasp, other wise why? People like Billy Pate inspire us to reach further. 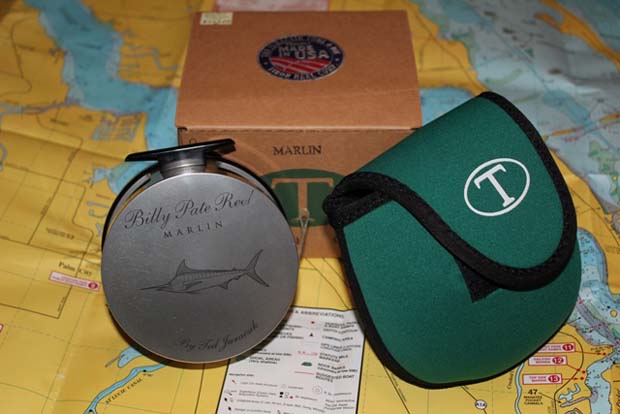 These firsts were not accidents, not by a long shot. Billy learned as a young man how to plan, see the outcome of an endeavor, and execute the plan to completion. When his father decided to sell the family carpet-manufacturing factory, Billy convinced dad to give him a month to make a competitive offer to buy the business. Billy laid an ingenious plan to make deals with his existing customers for advance orders, leveraged the proceeds with the bank and made the purchase.

Billy engineered his accomplishments and had the tenacious drive to execute whatever goal he set out to achieve. A pioneer at heart, he always wanted to reach beyond what had been done, not so much to out do competitors (not that he did not have a competitive spirit, he did) but to do the undone.

In his youth he was a competitive water skier, favoring ski jumping. Despite losing his left kneecap at age 21 in an automobile accident, he went on to win second place in the nationals.

Some years later when he had discovered bluewater water fly fishing, he spent some time fishing off the coast of Ecuador with a friend, Dr. Webster Robinson, a pioneer in catching Atlantic sailfish, Pacific sailfish, and stripped marlin, Billy resolved that he not only had to catch those but also the other three species of billfish never caught on fly giving him the near ultimate slam. He needed the white, black, and blue marlin (there are two sub-species of blue marlin, the Atlantic and the Indo-Pacific blue). Billy was the first to achieve the slam finishing it off with the Atlantic blue marlin caught in Havana Cuba August 21, 1979. Not only did he catch all six but they were all world records. While the slam was complete Billy needed to catch the Indo-Pacific blue, but it was not to be.

Pictured with his world record tarpon caught on a fly in 1987 in Homosassa, Florida. The record stood for 21 years.

Next Billy turned his attention to world record tarpon, which became a driving obsession. In usual fashion: plan, vision, and execution. In 1982, Pate established a world record at Homosassa of 188-pounds on 16-pound tippet that stood for 21 years. Billy spent the next years of his life chasing the elusive 200-pound girl from Homosassa to Gabon and even to deeper darker places one only hears of but does not really want to go.

Billy always talked about the wonderful friends he made wandering the world and the beautiful places he was allowed to visit and pursue his passion.

So many stories, so little time, as Billy said it’s about the people you meet on the way and the friends you keep. Passion drives us to exceed our grasp. There are matters of life and death, then, there is fly fishing.

Don Reed is a freelance writer, fly tyer, and angler. He is also our fly tying editor and he owns Saltwater Flytyers and lives in St. Augustine, Florida