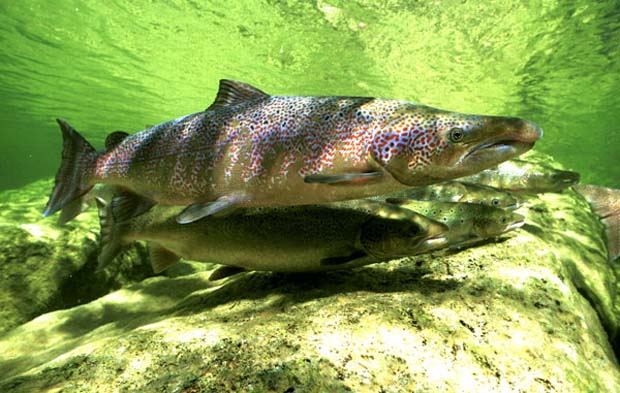 The Nova Scotia Salmon Association is maximizing the benefits of the U.S. Clean Air Act by giving a river that is home to endangered wild Atlantic salmon in southern Nova Scotia continuous doses of lime.

[dropcap]T[/dropcap]he U.S. Clean Air Act has helped curb emissions of sulphur dioxide (produced by coal and oil-burning industries) and nitrogen oxide (from vehicle exhaust) that travel on prevailing winds, and fall as rain or snow, driving up acidity levels of distant rivers and damaging fish.  While some areas are recovering, other regions, like eastern Canada and Maine, are still struggling with high acidity levels in their rivers and streams, a problem that could last another 70 to 100 years. 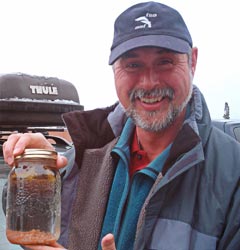 “The granite rock geology in Nova Scotia’s southern uplands region is very slow to repair the soils needed to neutralize acidic water.  Liming now can improve conditions in our rivers until the environment is restored naturally,” said Lewis Hinks, Director of Regional Programs in Nova Scotia for the Atlantic Salmon Federation, a partner in the liming program.

In 2005, West River near Sheet Harbour, located 60 miles northeast of Halifax, became the first test river for using cutting-edge technology imported from Norway to counteract the impacts of acid rain.  One of more than 50 Nova Scotia rivers that are victims of decades of acid rain degradation, this once prolific salmon river was closed to fishing in 1999 after centuries of supporting a vibrant sports fishery.

Sheet Harbour’s doser is an automated system that draws in river water, combines it with powdered limestone, and releases it further downstream.  Acidity is measured on a pH scale.  A lower number on the scale means greater acidity.  When a river’s pH reading drops to 5.4, Atlantic salmon reproduction begins to fail.  At 4.6 or below, salmon reproduction is impossible.  The doser is programmed to respond to the river’s acidity levels, providing a consistent 5.5 pH reading or better, regardless of the seasonal water fluctuations.

Since the lime doser’s installation, water in the river’s test sections has been between a pH of 5.5 and 7.   Mr. Hinks continued, “Acid-related mortality of wild Atlantic salmon is nearly zero in the limed sections of the river, and juvenile salmon (smolt) production is increasing.”

Edmund Halfyard, a PhD candidate in Biology at Dalhousie University, leads the research.  He has monitored smolt production in both limed and unlimed sections of the river since 2007, two years after liming began.   Between 500 and 1500 smolt are produced annually in the unlimed sections.  In the limed sections, during the first three years of monitoring, the number of smolt ranged from 1900 to 2800.  The production rose to 7,200 smolt in 2010 and in 2011, an astonishing 11,700.

Mr. Halfyard said, “Because of the complexity of the acidity problem and its impact on West River’s salmon populations, we are getting just a glimpse of what is happening.  It does appear though that liming is having a positive impact on the river and its fish populations.”

About the Atlantic Salmon Foundation

The Atlantic Salmon Federation is dedicated to the conservation, protection and restoration of wild Atlantic salmon and the ecosystems on which their well being and survival depend.  ASF has a network of seven regional councils (New Brunswick, Nova Scotia, Newfoundland and Labrador, Prince Edward Island, Quebec, Maine and Western New England).  The regional councils cover the freshwater range of the Atlantic salmon in Canada and the United States.