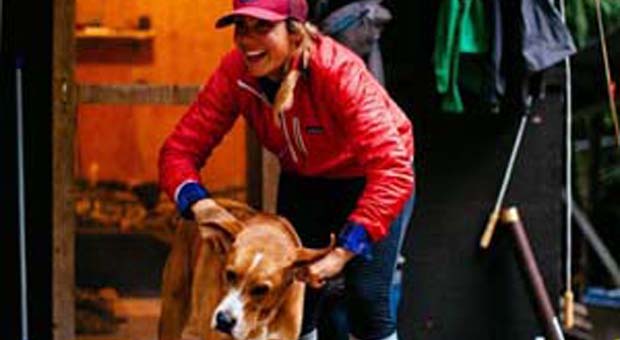 [dropcap]T[/dropcap]he American Museum of Fly Fishing announced today the addition of three new members to their Ambassador Program. The Museum is ecstatic to have April Vokey, Derek Olthuis, and Peter Kutzer join a variety of super talented individuals from all walks of fly fishing life -guides, tyers, casting instructors, photographers, and television personalities – that have all come together in support of fly fishing history. April with her hound.

April Vokey began fishing as a toddler. By the sixth grade, she was saving her allowance for weekend visits to the local tackle shop where she eventually stocked her ‘hand-me-down’ Plano box with every lure and bait she could afford. Counting down days for the opportunity to attain her driver’s license, by the age of16 she spent every summer, fall and winter seeking escape through the salmon and steelhead migration that frequented BC’s coastal waters. Such ventures drove her to self-discovery, realization, motivation, and a hunger to escape a troubled environment in the city she called home. After discovering a passion for fly fishing in her teens, April Vokey soon dedicated her entire life to the pursuit, eventually culminating in her founding Fly Gal Ventures in 2007 at age 24. The company was built on the basis of the promotion of both education and encouragement to those who looked to chase their dreams. She has since established herself as a respected authority in the sport and has traveled the globe in pursuit of gamefish on a fly rod.

Her writing has appeared in numerous industry leading publications including Fly Fisherman, Fly Rod & Reel, and Fly Fusion magazines. In July 2012, April became the first fly angler to be featured in Outside magazine for their “XX-Factor” segment. She is in the process of authoring her first book. Also a popular TV personality, April has been featured on the Outdoor Channel’s Buccaneers and Bones series, 60 Minutes Sports, The Steve Harvey show, Discovery Channel’s Refined, Discovery’s/OLN’s Close Up Kings, and WFN’s Fly Nation TV. Most recently, Vokey proudly wrote and hosted her own exclusive series, ShoreLines with April Vokey, as shown on the World Fishing Network. The series focuses on fly-fishing’s rich history and the people it consists of. Feeling limited by airtime, she has since branched out with her podcast, Anchored with April Vokey, an uncensored series dedicated to archiving the stories and personalities from some of fly-fishing’s most influential people. The show is one of the only fishing podcasts solely recorded in a face to face environment where April ensures to ask questions apart from the norm. She is a FFF certified casting instructor, a fly-tying instructor, an active conservationist, traveling speaker and an eternal student of life and love. Derek with a sizable trout.

Derek Olthuis was raised in North Western Montana where he learned to fishdeveloping a love for the outdoors. At the age of 8, while visiting family in Bozeman, his uncle introduced him to fly fishing on the Gallatin River. Derek has since had the opportunity to fish around the world chasing anything that swims, although his main loves are trout and char. His passion for fly fishing is centered in teaching others about the sport. He hopes to help everyone more fully enjoy their time on thewater by helping them to become a better angler. As a guide and fly fishing instructor he hopes each client will learn and develop skills to help them better understand trout behavior and the techniques to catch them. When he is not guiding he can be found taking pictures or filming for the IF4 Film Festival. Derek is an ambassador for Loop Tackle, Kast Gear, Tacky Fly Fishing and a field tester for Orvis. If you ever see him on the water don’t hesitate to ask for or give some fly fishing advice. He believes fly fishing is a sport in which there is always something more to learn. Peter with a nice bonefish.

Peter Kutzer has been spending time in the outdoors of Vermont for as long as he can remember. Peter grew up on a small farm in Southern Vermont fishing ponds and rivers close to his back yard. His fondness for fly fishing began in the early 90’s and in 2002 he started working as a Fly Fishing Instructor and Guide for the OrvisCompany’s Fly Fishing School in Manchester, VT. Peter truly enjoys introducing people to the outdoors through fly fishing and wing shooting, and it’s evident in his enthusiasm while teaching. As an Orvis Adventures Specialist, Peter creates technique – and species-specific fly fishing schools from Vermont to the Florida Keys, the Western United States, Canada and the Caribbean. Casting techniques include single hand for trout to bonefish or two handed casting for salmon and steelhead. He is well versed in both fresh and salt water with a fly rod. While he’s not teaching specialty schools, you will see him giving casting tips on Orvis News’ Ask a Fly-Fishing Instructor. He does a great job of making big fish look small!

The American Museum of Fly Fishing’s Ambassador Program has doubled in size since 2014 and we are committed to growing the program across the entire country. The ambassadors are central in promoting the Museum’s mission as steward of fly fishing history both in person and online. The Ambassadors will be a big part of where we are going in 2016 with our upcoming new website and our Saltwater Project.

About the American Museum of Fly Fishing: The American Museum of Fly Fishing is the steward of the history, traditions, and practices of the sport of fly-fishing and promotes the conservation of its waters. The Museum collects, preserves, exhibits, studies, and interprets the artifacts, art, and literature of the sport and uses these resources to engage, educate, and benefit all. The Museum fulfills this mission through our public programs (including exhibitions, gallery programs, lectures, special events, and presentations), our publications, and our quarterly journal, The American Fly Fisher.