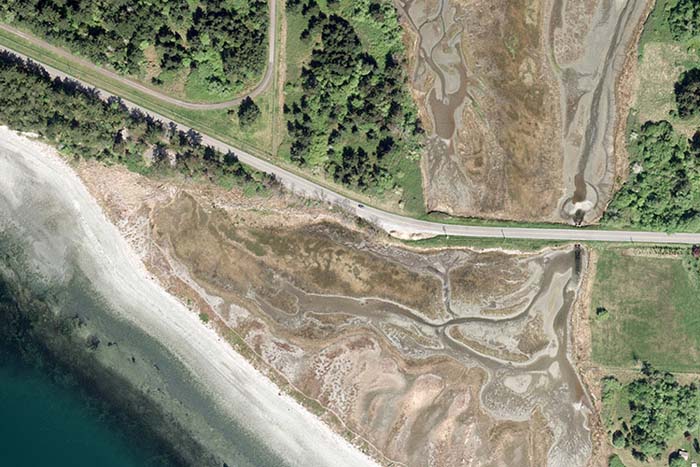 Aerial photo shows a road cutting through a rural landscape. Sediment builds up on both sides of the road connecting Marrowstone and Indian Island to the mainland. (Photo: Jefferson County, Washington)

[dropcap]A[/dropcap]cross Washington State, restoration projects are underway to aid in the recovery of declining salmon populations. In the northwestern region of Puget Sound, one such project is predicted to significantly increase juvenile salmon numbers—while also providing the local community with infrastructure that is resilient to changing climate conditions.

Several years ago, residents of Marrowstone and Indian Islands in Jefferson County, Washington, contacted the State Department of Ecology with complaints about poor water quality and fish deaths around Kilisut Harbor, the body of water that lies between the islands.

The underlying cause? A roadway—and its too-small culverts—blocking the flow of water between Oak Bay, which lies on one side, and Kilisut Harbor beyond. The road serves as a lifeline for island residents, providing the only entry and exit point by car and their only connection to utilities on the mainland. But the old causeway is also degrading habitat quality in the area and interrupting the migration routes of endangered salmon. 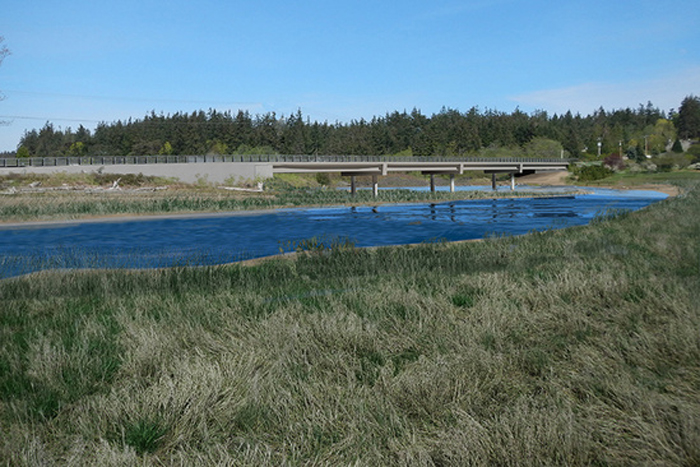 A graphic depicting the design of a tall bridge crossing over a body of water. An artist’s rendering of the new bridge planned to replace the current causeway. (Photo: Cardno Engineers and KPFF, Washington Department of Transportation)

Without a direct connection from Oak Bay to Kilisut Harbor, migrating juvenile salmon are left taking alternate routes that are significantly longer, more impacted by development, and lack the habitat and calm waters they need—all of which put these vulnerable salmon species at risk of predation.

To restore this crucial salmon habitat and improve water quality in the area, the NOAA Restoration Center is supporting restoration work at Kilisut Harbor through our Community-based Restoration Program and the NOAA Coastal Resilience Grants.

In August 2019, NOAA and partners on the Kilisut Harbor Restoration Project team attended a groundbreaking ceremony to mark the beginning of construction. Throughout the duration of the project, partners will remove the earthen embankment and two culverts on which the road currently sits and replace them with a four-span bridge. 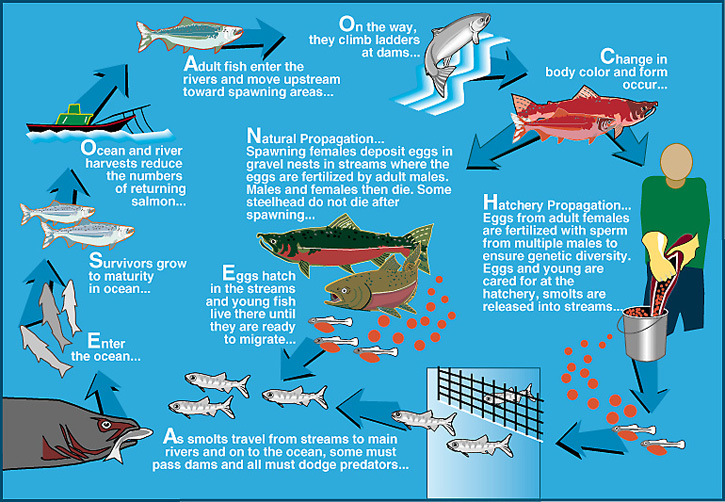 Life cycle of Pacific salmon. Produced by US Army Corps of Engineers – a commons image.

When completed, the project will restore 27 acres of historic tidal channel and reconnect the large numbers of migrating juvenile salmon that converge at Oak Bay with the 2,285-acre Kilisut Harbor—and the plentiful foraging opportunities available within. Long-term monitoring efforts will track, evaluate, and report environmental changes during the restoration process.”

In addition to opening a path for migrating salmon, the project is also intended to benefit residents’ quality of life on the islands. The new roadway will increase infrastructure resilience to rising sea levels and increasing storm events, reduce the risk of the island community becoming isolated during an emergency, and increase opportunities for recreation, both on land and in the water