Art: Something very fishy here, but everyone likes it a lot

Rachel Reeve, photographed at her studio in Greenwich, Nova Scotia, specializes in creating prints of fish in a “sustainable and respectful manner.” Photo by Darren Calabrese Coastal

This visual artist specializes in making prints from fish, honoring a Japanese tradition 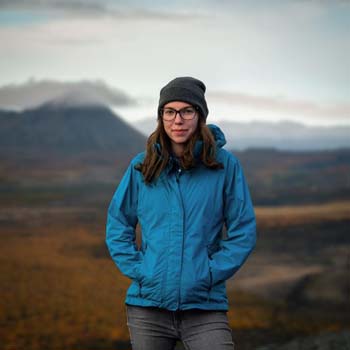 Kaylee Maddison is a Canadian freelance journalist. Her work has been published by Up Here, Visual Arts News, Hamilton Magazine, and more. When not reading or writing, she’s likely mapping out her next adventure.

Some people work in cubicles, others work in kitchens, but the most intriguing workplace of all may be the coast. Meet the people who head to the ocean instead of the office in our Coastal Jobs series.

Rachel Reeve is an interdisciplinary visual artist based near Wolfville, Nova Scotia, who creates works of art using the traditional Japanese fish-printing method known as gyotaku—meaning “fish” (gyo) and “rubbing” (taku). Through the technique, developed around 200 years ago, she investigates the human connection with water and its creatures.

One of my favorite prints is of a large striped bass my friend caught. He asked me to print it because he wanted a record of the experience. That impulse is how gyotaku originated, as a way for fishermen to document their catches. The bass was so big, around 85 centimeters long, that I didn’t have paper large enough. He kept it in the freezer until I managed to buy a huge roll of traditional Japanese rice paper called washi. Once we thawed out the bass, we printed it using non-toxic ink late into the night.

Later, when my friend cut open the bass to fillet it, there was a smaller fish in its stomach. Somebody afterward said, “You should have printed it!” That would have been great, but I’m not sure it was intact.

Gyotaku appeals to my interests in printmaking and nature; I like the tactile aspect of it, too. There’s no tool between you and the subject, so you get to know it in an intimate way. I start by cleaning the fish, inking it, and then blotting the ink off. You need to remove the excess, otherwise, the print is too dark in areas and you lose the details. It takes some finesse. For accuracy, I also have to clean ink from the eye and paint it in later. Next, I press a sheet of washi onto the inked fish and gently rub the surface, so when I peel the paper away, a mirror image remains. When I first started, the fins were an unexpected challenge. The gyotaku doesn’t look right unless the fins are propped up. I found that using modeling clay was helpful, though now I’ll get under the paper with one hand and hold the fin up. 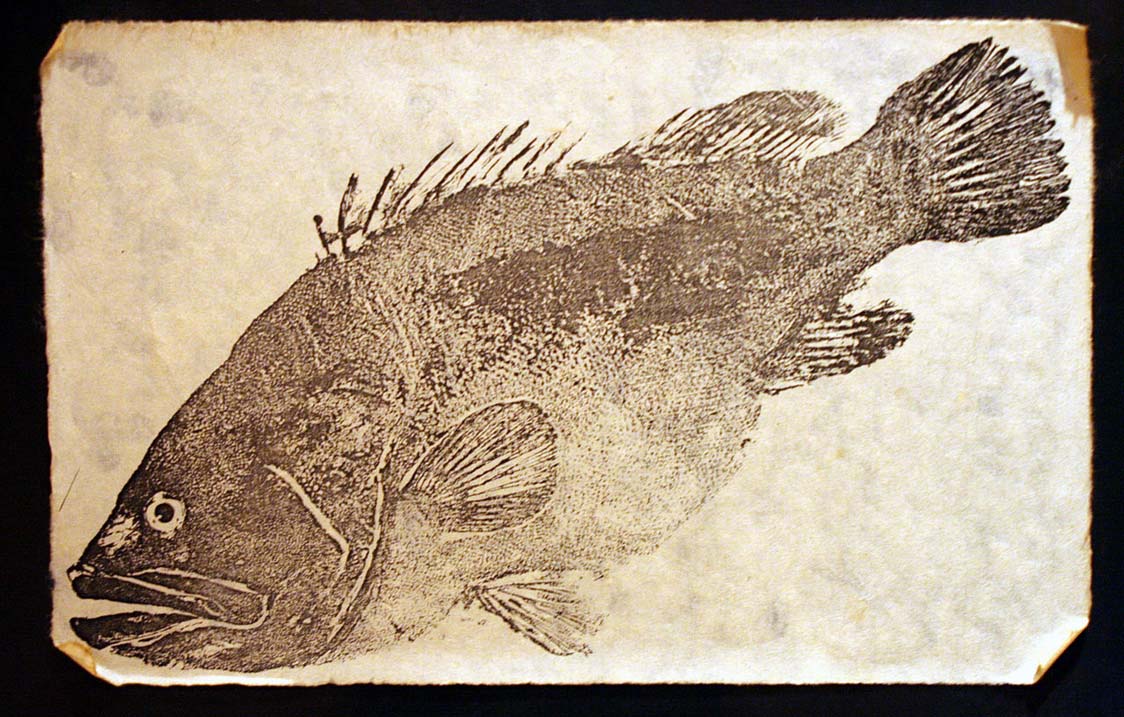 The gyotaku method of printmaking uses fish, sea creatures, or similar subjects as its ‘printing plates’. Prints were made using sumi ink and washi paper. It is rumored that samurai would settle fishing competitions using gyotaku prints. This original form of gyotaku, as a recording method for fisherman, is still utilized today, and can be seen hanging in tackle shops in Japan. – Wikipedia

My aim is to make gyotaku of what’s local in order to tell a story about this region. The fish I’ve printed have been caught by family and friends, though I want to connect with other fishers and share the process with them. So far, I’ve printed perch, bass, American shad, and chain pickerel, which is an invasive species here. I hope when people look at prints of fish like the chain pickerel, they can appreciate the creature for what it is, even though it does damage to our local rivers.

Recently, I’ve been printing lobster. We’ve had a crisis between Indigenous and non-Indigenous fishers here in Nova Scotia, and I wanted to do something that acknowledged, in my own way, what the Indigenous fishers are going through. I started by printing the whole lobster intact but realized that I needed to take it apart to create a better print. First, I print the body and tail, then add the claws, legs, and antennae piece by piece. The process takes around 45 minutes. It sounds funny to just print one lobster after another, but it’s meditative, and each time I do it, I get to know the intricacies of the animal’s form. In that way, the print feels like a collaborative work of art.