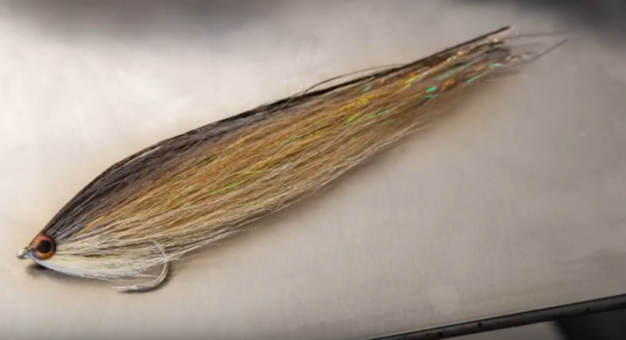 At The Vise: Tying the Snow Runner Deceiver

[dropcap]S[/dropcap]now Runner is a natural fiber used commonly by Brits for salmon, steelhead and pike flies. According to Skeena River Fly Supply, who sells the material, the hair originates from a fairly uncommon breed of farm animal that is domestically bred and is slightly stiffer and more translucent than Icelandic Pony, or Arctic Runner, and does not mat in the water like Icelandic Sheep or Llama.  That said, they do not specify what animal it is from. A little digging suggested to me that it is either pony, sheep or Nayat. SRFS markets it as “translucent having a slight crinkle to the hair so that the wings retains volume in the water. The under fur and shorter guard hair has a texture that is somewhat between Polar Bear and Fox and is an excellent material for smaller flies, such as classic Atlantic hair wing patterns and steelhead patterns.” The material is also able to be made into brushes that make the fibres stand out at a 90 degree angle helping to create patterns that retain volume while using materials sparsely.

The following video is for tying a pattern that is incredibly versatile in saltwater applications. Jari Koski demonstrates this great material tied within the Snow Runner Deceiver.

Jari advises the following tips when tying this pattern:

1)The overall desired length of the fly determines the length of the SR used. The first two bucktail ties can be almost as long as the SR. When you get closer to the front of the fly shorten the bucktail, especially on the bottom part to create a a good taper and minimize fouling.

2) Especially when tying Hollow ties make sure you keep your thread as straight as possible when creating the thread cone. Use more thread and control the angle more if your using stiffer bucktail. If you got the nice soft stuff, remember to leave the angle high enough as it will go down quite a bit after you wash it up