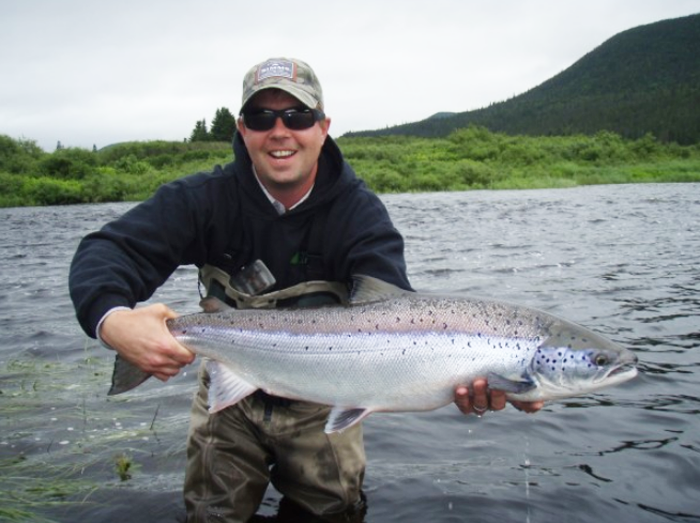 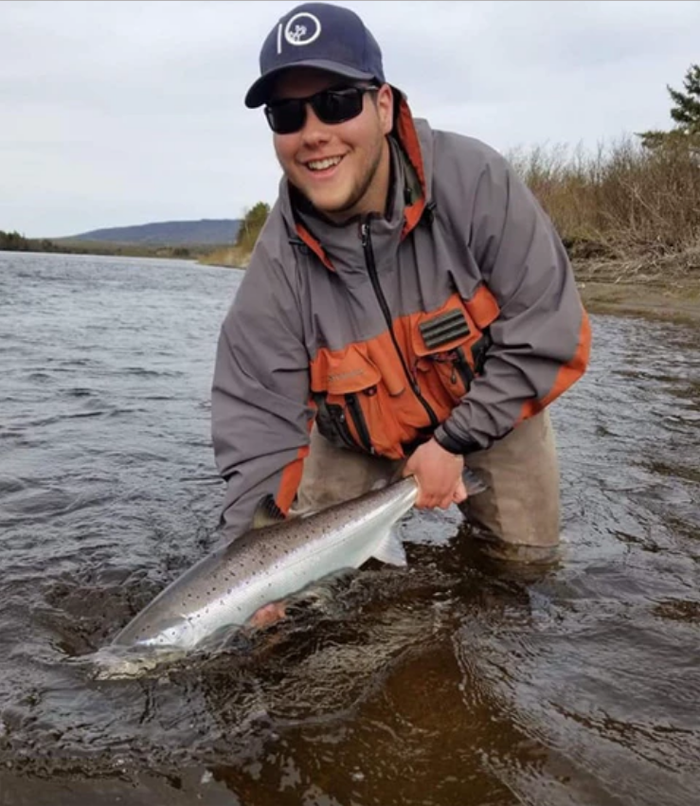 Aaron Rideout releases a gorgeous Atlantic salmon. He says “This was in the Codroy River, high and with cold water. It was just after the water levels skyrocketed then dropped back down to fishable levels. I believe due to that high water flash, we had a slow week fishing with none being seen or hooked until a morning later in the week where we each hooked one. It was my first time fishing Codroy.” ASF image.

To Know an Atlantic salmon

[dropcap]T[/dropcap]here is no end to the learning about Atlantic salmon, their habits, the characteristics of their rivers, and how to predict what they will do next.

Aaron Rideout’s description of bringing in and successfully releasing this Atlantic salmon in the Codroy River of southwest Newfoundland is a great example.

Getting to know the characteristics of a river takes time. And just as important is to understand how an Atlantic salmon reacts to that river, and the water and atmospheric conditions it is experiencing at any point in time.

Anglers of the first half of the twentieth century and before found enough to ponder in seeking a better understanding of the habits and biology of Atlantic salmon. But from the mid-20th century onwards, the imperative to safeguard the future of Atlantic salmon runs has thrown in the need to learn the techniques of live release.

Lee Wulff, the near mythical American salmon angler first promoted the learning of techniques of live release with experiences gained in Newfoundland, mostly up the Northern Peninsula on streams like Portland Creek.

But since then the science has caught up, with assurances that if water temperatures are cool, and with anglers being gentle with the fish, there was at most a two or three per cent mortality. We also learned to be fair to the Atlantic salmon’s survival by not fishing above 68° or so.

ASF has codified a lot of the hints or suggestions on live release, but sometimes it is worthwhile reading how someone else has written down their own rules for successful release. Sean Vardy, a well known Newfoundland salmon angler who has much experience also with the need for learning conservation techniques, recently put his own list up on TSANG, a Newfoundland Facebook Group’s page:

1. DO NOT BEACH, EVER. Walk out into deeper water to catch and release the fish.

2. Heavy leaders – heavy leaders give you the ability to get the fish in quick, and release them. Do not play the salmon or trout to exhaustion.

4. Barbless hooks – Not only better for the parr, but also makes the task of removing the hook easier.

7. Releasing “tools” – depending on situation: bare hand or a Wet white cotton glove, or knotless dip nets. I find that turning the fish slightly on side to calm it enough to quickly remove the hook.

8. Leave the head in the water as much as possible. Imagine working out at the gym, and someone tapes your mouth!

9. Avoid the “death grip”- support the fish properly. Be mindful of vital organs and never squeeze the fish.

10. Keep hands far enough back to avoid the area between the fins.

Vital to keep hands away from gills and eyes.

11. Handle the fish as little as possible to avoid moving slime.

12. If water temperatures are high, say above 20° C., be especially careful in the playing and handling of the fish, as there is extra stress on it. Consider not fishing, and waiting until temperatures drop. The fish need YOUR help on this one.

13. Never lift the fish vertically by its tail. Among other things, this puts increased pressure on the spine, and can easily break the tail.

14. Revive the fish adequately – While supporting the fish as noted above, keep the fish underwater, and move to a location that has some current. Face the fish into the current while continuing to support it. At this point relax the grip on the tail and when it is ready, the fish will swim away.

There may be other points to make, but this is a good overview that comes down to one thing: Take care of the Atlantic salmon you have just angled, and it will live to go on to spawn and create the next generation.

Also, a reminder that there are some good videos on live release out there, including the one that FQSA, ASF and the Quebec government collaborated on.