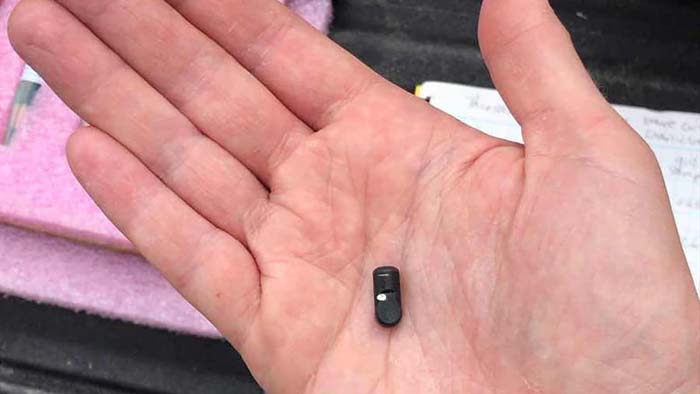 This predation tag knows when it has been eaten because a polymer coating dissolves in the stomach of a predator. (DFO)

A fish tag that knows it’s been eaten is helping endangered Atlantic salmon.

Up to 48 per cent of critically endangered fish are being eaten while leaving Stewiacke River.

This predation tag knows when it has been eaten because a polymer coating dissolves in the stomach of a predator.

New tracking devices inserted into Atlantic salmon reveal that up to 48 per cent of the critically endangered fish are being eaten while leaving Nova Scotia’s Stewiacke River on their ocean migration.

It certainly is high, and it’s somewhat higher than some work that was done by some colleagues of mine about 10 years ago using similar tags, but without the predation detecting capability.”  — David Hardie, a marine biologist with the Department of Fisheries and Oceans. 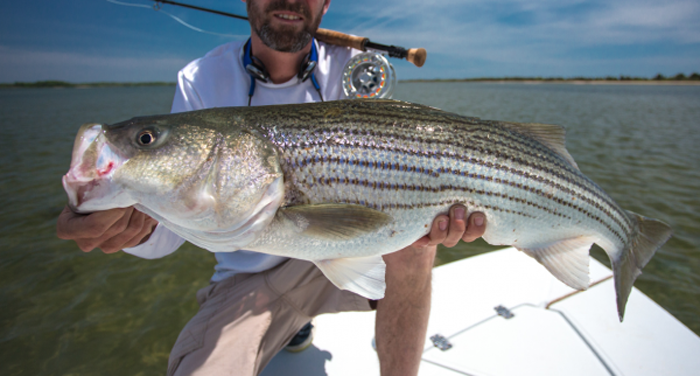 Striped bass are predators, prey, food source and gamefish. No matter where they live, it’s a management issue to keep things in balance. In Canada, like elsewhere, climate change has its effects on fisheries. Capt. Andrew Derr photo.

Each spring for the past three years Hardie has implanted 50 salmon smolts with predation tags before they run to the ocean. The tag is equipped with a small dab of polymeric coating that, once eroded by the stomach acids of a predator, changes the signal emitted by the tag. Receivers moored in the Stewiacke River and Minas Basin in the inner Bay of Fundy record a different acoustic signal from a digested and undigested tag.

Eaten on the way to the sea

In the past two years between 38 and 48 per cent of the smolts that we tagged and released here at the head of tide at Stewiacke River Park were triggered as predated before they reached the mouth of the Shubenacadie River at Maitland.” — David Hardie

A previous study has estimated between seven and 27 per cent of tagged salmon smolts in the Stewiacke were being eaten while leaving the river.

That was based on the behaviour of tagged smolts that suddenly started acting like striped bass, moving up and down the river with the tides during bass spawning in the spring. 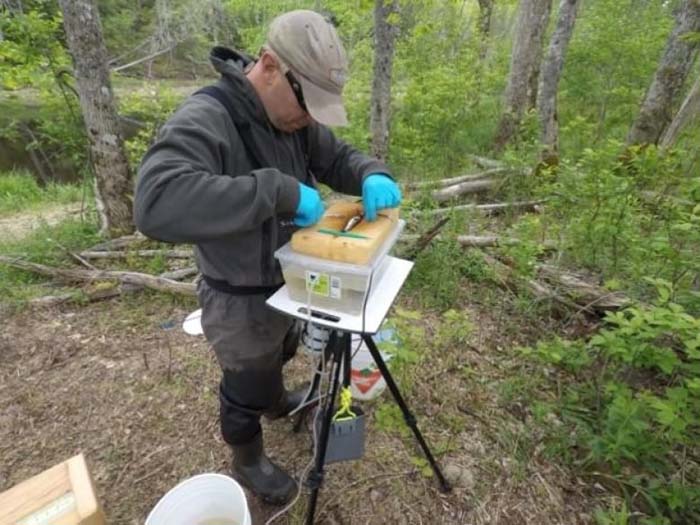 It’s not clear whether the higher predation level in the Stewiacke River is the result of better tracking technology or the booming striped bass population.

The spring smolt run to the ocean coincides roughly with the arrival of spawning striped bass.

“Striped bass have been coexisting with salmon in the entire Bay of Fundy for a long time but striped bass are doing quite well in this river in particular, and it’s a spawning site,” said Hardie. “The smolts are running through the gauntlet of these striped bass.”

This year, Hardie and team members inserted the tags 60 kilometres back from tidewater, and away from striped bass spawning, to try to give the smolts more time to recover from the tag insertion. 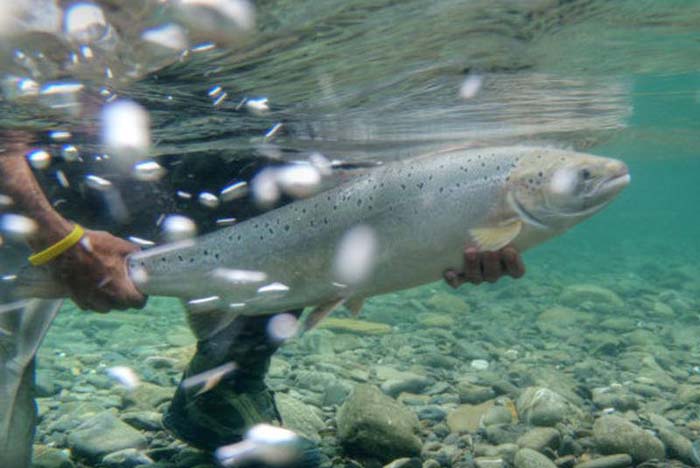 An Atlantic salmon is released on Bonaventure River, Quebec in this handout photo from the Atlantic Salmon Federation. KELSEY TAYLOR/ASF.

The fish are anesthetized for the surgical operation, which would be equivalent to a soda can being inserted into a person.

“Most of our smolts, over 80 per cent of them, made it here to the head of tide and we only had four or five so far confirmed that were predated in the freshwater reach. So that was somewhat encouraging.”

Invasive chain pickerel have now infested one upper branch of the river.