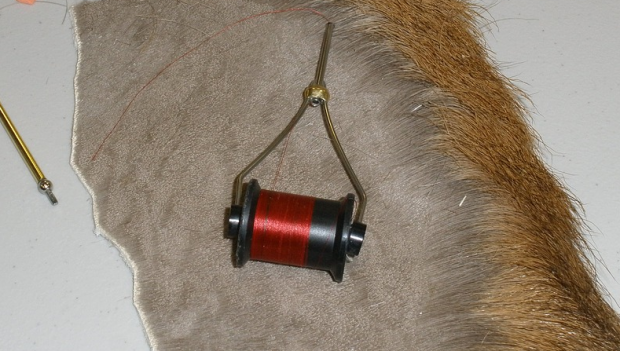 An essential tool: The all-important bobbin

[dropcap]N[/dropcap]ext to your tying vise, the most important tool on your fly tying bench will be your bobbin.  This wonderfully simple little device holds and tensions tying thread while at the same time giving you great control over how that thread is placed onto the hook. 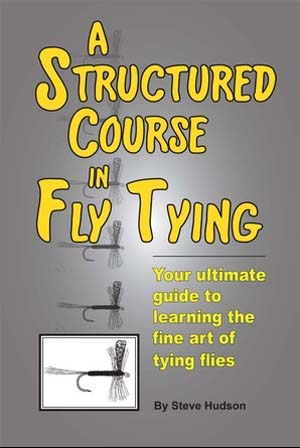 All bobbins have some system for holding the thread spool. On most, that consists of two arms made of springy steel. The spool of thread is gripped between a pair of low-friction bearings of some sort, one on the end of each arm. These bearings may be made of metal or plastic, and they’re sized to nestle into the holes on each end of a spool of tying thread.

The next major component of a bobbin is its barrel, a long, hollow tube which gives you precise control over where your tying thread is placed. Most barrels are made of steel, sometimes with a ceramic bearing at the tip end, but you’ll also see all-ceramic barrels. The ceramic provides a hard, smooth surface over which the thread can flow without fraying. Ceramic bobbins cost more, but they virtually eliminate bobbin-induced thread damage. However, a quality metal-barrelled bobbin with a good barrel and a smooth tip will do the same job.

The point where the legs and the barrel come together is called the collar of the bobbin. That’s where your index finger and thumb rest; the barrel extends from that point, and the spool of thread is cupped in the palm of your hand.

You’ll find other bobbin configurations on the market, and many of them work well. Most, however, will resemble the one just described.

A properly adjusted bobbin will hold the thread spool securely when you release the bobbin but will have a grip that’s loose enough to allow the spool to turn freely when you need to pull out some thread. Once in a while, you’ll get a bobbin that’s perfectly adjusted right out of the package, but more commonly you’ll need to make some adjustments before putting the bobbin to use.

To adjust the tension, gently pull apart (or squeeze together) the bobbin’s arms until you have the desired amount of pressure on the spool (which of course translates into thread tension). Remember that when tying you can always add tension by applying a bit of pressure with your hand. 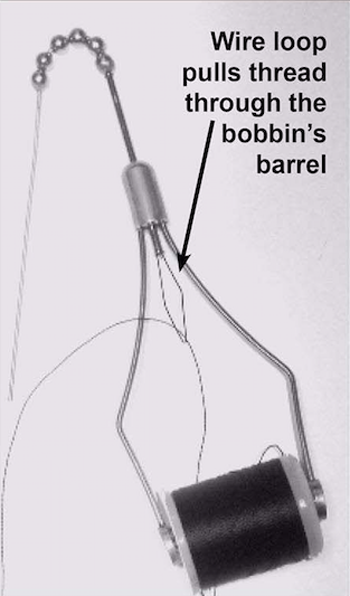 The most challenging part of using a bobbin may well be the seemingly simple matter of threading it – particularly if you’re using fine diameter thread.

To make the job easier, use a bobbin threader. This tool is nothing more than a long loop of very fine wire (or even monofilament) that’s been mounted in a handle. Simply poke the wire through the bobbin barrel from the tip toward the thread spool so that the loop extends out near the spool. Then put the thread through the wire loop and pull the threader out through the tip end of the bobbin’s barrel, bringing the thread along with it. It’s as simple as that.

To make the job easier, use a bobbin threader. This tool is nothing more than a long loop of very fine wire (or even monofilament) that’s been mounted in a handle. Simply poke the wire through the bobbin barrel from the tip toward the thread spool so that the loop extends out near the spool. Then put the thread through the wire loop and pull the threader out through the tip end of the bobbin’s barrel, bringing the thread along with it. It’s as simple as that.

If you find yourself without a bobbin threader, here’s a handy trick that often works. Fold the thread back over on itself and twist it tightly. The twisted thread may be stiff enough for you to push it through the bobbin barrel.

Some tyers get into the habit of threading bobbins by using their mouth to suck the thread through the barrel…soda straw style. This works, but you never know how clean that bobbin barrel may be. A bobbin threader is the best approach, most agree!

Although a lot has been written about bobbin design, less is said about the right way to hold the bobbin when tying. Yes, there’s a right way – and making it a habit from the start will pay off in the long run.

After threading the bobbin, hold it so that the spool rests in the palm of your hand and the barrel is sticking out from between your thumb and index finger, as shown.  This sort of grip provides excellent control over the thread as well as fine control over thread tension. If additional tension is required at any time, simply apply pressure to the spool by slightly squeezing your palm onto the spool. 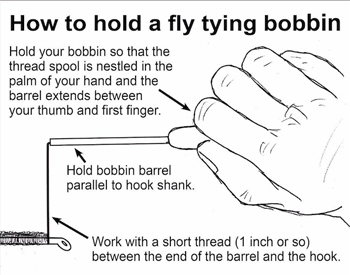 Here’s one more thing to think about when holding your bobbin. You want to hold it so that its barrel is parallel to the shank of the hook.

Finally, how much thread should there be between the tip of the bobbin’s barrel and the fly being tied? Most experienced tyers work with just an inch or so of thread between the bobbin and the hook. Most tyers agree that this gives you the best “feel” for what the thread is doing.

A good bobbin should last for years. I still use one that was given to me about 15 years ago. In fact, the biggest danger with bobbins seems to be losing them under the sofa cushions!

Next time: A place to keep your tools

This series is based on the book A STRUCTURED COURSE IN FLY TYING, published by Chattahoochee Media and available from many fly shops, from Amazon, or direct from the author. You may want to get a copy to reference as you go through the course, for it covers many areas in more detail than we can here.