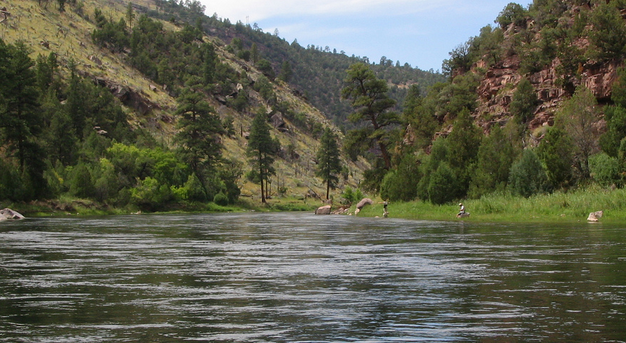 I was there before

[dropcap]B[/dropcap]efore pavement tamed places only previously accessible to those willing to risk a little more. Before social media became the way to share (or over share) fishing information. Before everyone was able to access any and all information on any location in the world via the Internet. I was there before.

Let me start from the beginning. It begins with me finishing my undergraduate degree in 1998. I suppose I could have started working in that field immediately, but life had other plans.

I found out what the Internet was about then, and found out you could get amazing information and use “electronic messages” to contact people around the world. I began emailing lodges and guide services in Chile and Argentina. I had purchased a ticket for 3 months in Chile to go fishing and sightseeing in Patagonia, and thought maybe I could get some work down there. Most responses said that no help was needed. One of the messages was about a ranch at a destination in Argentina, and I noticed that the mailing address for the man who responded was in my hometown in Utah. So I emailed back, asking if he needed a bilingual guide. He called me back, and we met at the local burger joint and, after he went through a stack of pictures of me and my friends and family catching fish, he explained that they were just starting out, that an American had just purchased a 10,000-acre cattle and sheep ranch, and that it had a great trout river running through it. Literally. I had never actually done paid guided fly fishing trips before, but I had taught many people all about fly-fishing, I was enthusiastic, and had been tying flies for years. So when he called me a few days later to offer the job, I jumped at the chance. 10 days later I was on a plane, and then a bus, and then another bus, and met up with my boss in central Patagonia, Argentina. I lived in a wall tent on the side of the hill, with a floor I built, and slept in a sleeping bag for 5 months among the cattle and horses on the ranch. I helped build the lodge. I tied flies. I made contacts with locals. I made friends with other guides from the general area, which usually meant at least a 2-hour drive over mostly dirt roads back to civilization. I had a Honda four-wheeler as my transportation and a whole summer to fish, explore, and document my experiences. I never had so much freedom, fun, and adventure. Video and still cameras were my primary companions most of that summer. I was there before the lodge, before most fishermen knew the potential of this river, and before many more people came to know it. In that and following years I have spent countless hours getting to know that river, and have found nothing else like it. Imagine the perfect trout river, nearly all to yourself, winding through an amazing valley walled by the Andes. I was there before.

When I got home the next May I had no job prospects. The same man who got me the job in Argentina called Steve Schmidt at Western Rivers Flyfisher. My boss had been talking to Steve about organizing group trips down to the lodge in Argentina, and asked Steve if he was looking for help. I wasn’t too hopeful.  But my boss came back and told me that Steve was looking for help, and he’d like to meet me. So I went into the shop and met up with Steve, and he offered me the job. When I asked Steve if there was a dress code of any kind, he got a perplexed look on his face, and said, “Nobody has ever asked that before”.

So I spent North American summers in the fly shop selling flies and guiding local waters, and South American summers guiding in Argentina the next two years, making friends, exploring and guiding on new waters, and spending countless hours on the water, which I will never be able to replicate. After 3 years of trying to make the guide service work, the Argentine guide service I worked for shut down. I was lucky enough to continue to travel down to South America the next 6 years, either with groups of fishermen or on my own. Steve was very supportive of my travels down to South America and I was able to take several groups down over the years.  However, even when I would ask Steve if it was okay if I left for 2 or 4 or 6 weeks to go down and fish with my Argentine and Chilean friends, he would simply say something like, “see you when you get back”. It was on one of those trips in 2003 that I found THE fish. You know, THAT fish that every fisherman has, the one that a fisherman will never forget. It does not get better than this. Off the river for an Argentine lunch break at 2 pm.Photo Chocolate Lab Expeditions

It was February (August in South America), and it was HOT. I was back at the ranch where I guided for a week of solo fishing and spending time with friends. I was fishing a fairly small, cold tributary to the main river I guided on. In past years I had only caught small fish there.  I came upon a long, deep run, which is rare on this stream, as it tumbles down between steep canyon walls and falls quickly down into the main river. Large boulders and pocket water are the norm on this river. One afternoon I cast my PMX up to the head of the run, and missed what looked like a large fish. I decided to rest the pool, come back the next day, and do more exploring up the canyon.

The next morning I gassed up the 4 wheeler and went back to the same run. I set up my tripod with my old 1970’s Olympus manual SLR and loaded up some Velvia film. I started down low in the run, slowly fishing upriver, trying to not spook anything. I caught a few smaller browns and rainbows, but didn’t see anything like what I had seen the day before. After a few photos with the self-timer I made it up to where I could cast to the top of the run. I made the cast, the Speckled X plopped down, and a large mouth engulfed the fly. I set the hook, and immediately a large brown shape leaped out of the water. It jumped at least 2 or 3 more times, and the fight was on. He ran up and down the run, doing everything in his power to get unhooked. I was not happy that I chose a 5 weight instead of the usual 6 weight I usually fish when in Patagonia. The large brown trout eventually tired, and as I led him into my Argentine net, I was blown away. It was a brown trout so fat it looked like its mother was a largemouth bass. I had never seen a trout of that proportion. It had fat rolls near its tail.  It was one of those moments known only to a fisherman. The feeling is indescribable. It is one of those instances when everything comes together, when the perfect combination of situation, fly, and cast merge into one perfect moment. I snapped a few quick pictures and got him back into the river. As he pushed his way back into the deep run I thought to myself, “I have caught larger fish, but I have never caught a better fish”. I continued upriver, and found many other large, wild browns that were making me chase them UPstream, up through the powerful pocket water roaring down the canyon. It was one of the most memorable days on the water I’ve had before or since. I have Steve to thank for countless experiences that I have had for years after my first summer in Patagonia. He gave me a chance, without knowing just how little I really knew about fly-fishing, before I started working at the fly shop. Thanks to him taking a risk on an inexperienced trout bum I had the opportunity to learn so much during the 5-½ years I worked at Western Rivers. I made many friends while working at the shop and continue to fish with many of them to this day. Steve continues to give me opportunities to be involved in the fly shop, which I appreciate. I have Steve to thank for this and so many other memories and experiences. I’m sure that I never would have caught that fish without the opportunity Steve gave me, as he allowed me the chance to take weeks off of work every year to just fish and explore.  So thanks, Steve, for giving me the chance to catch my fish of a lifetime.