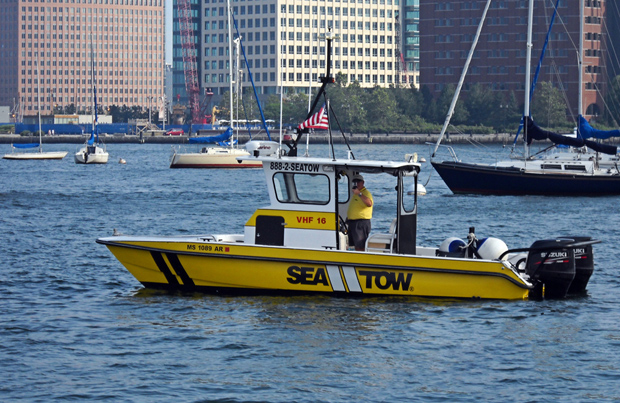 Boating: Anchoring safety tips that could save your life

[dropcap]S[/dropcap]ea Tow Captains typically assist boats that are anchored—much too often, improperly. Improper anchoring can lead to problems ranging from the annoying to life-threatening, but with a little planning any boater of average skills can anchor like a pro.

Here’s a look at what Sea Tow Captains advise when preparing to anchor a boat during the boating season. 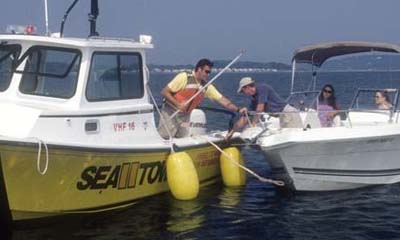 SeaTow in Boston doing what it does best, helping boaters.

Not letting out enough anchor rode (in nautical terms rode is synonymous with the line/chain combination connecting the anchor to the boat) is one of the most common anchoring errors. The common rule of thumb is 5 to 7 feet of rode for every 1 foot of water depth, or a 5-to-1 or 7-to-1 ratio. Some captains go to a 10-to-1 ratio just to be sure or in elevated sea and wind conditions.

“You can never fail with too much anchor line,” said Capt. Gary O’Reilly, owner of Sea Tow North Chesapeake out of Galena, M.D. “Too little line out hurts—a lot just compensates and makes the anchor hold better. During one storm I let out 300 feet of anchor line.”  There is an old saying, “when in doubt, let it out!”

Another common problem is having a large anchor locker, a good anchor and only 50 feet of rode.

“Our bay is only 5 feet deep, and some people will have only 40 or 50 total feet of anchor line,” said Capt. Ryan Bayley, owner of Sea Tow Great South Bay in Oakdale on Long Island, N.Y. “So what happens to them if they go to Fire Island and anchor in 50 feet of water? They really need 350 feet of anchor line. It’s a place they don’t normally take their boat, for example, and now they have a problem.”

Having plenty of rode ensures you’ll be covered in deep water, and also gives you a great backup of line in case there is an emergency, where you need to tie off or where extra line would be helpful.

Also, make sure the bitter end of the anchor line is tied off in the anchor locker, or fixed to cleat so it doesn’t pay out with the anchor, and away from the boat.

Have a spare anchor

Boats with a windlass should carry a backup anchor that can be used if the windlass gets jammed.

“If something happens with a windlass or you don’t know how to use the emergency release, there’s a problem,” said Capt. Bayley. “With a backup anchor you are covered. It could be your No. 1 piece of safety equipment.”