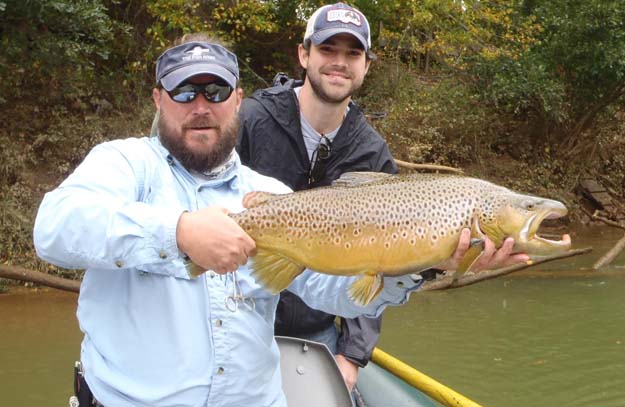 Rainbow trout and brown trout have the same ancestors

[dropcap]O[/dropcap]ncorhynchus (on-core-ink-us) mykiss are rainbow trout. They are indigenous to the Pacific North. Salmo trutta, brown trout are native to North Atlantic. That distinction started to take place 15-20 million years ago as land masses separated and continents formed.

Brown trout are one of the most genetically diverse vertebrates known. There is far more genetic variation present across populations of wild brown trout than between any populations in the entire human race.

Brown trout have between 38 and 42 pairs of chromosomes. Humans have only 23 pairs

Brown trout (including sea trout) belong to a single species, but several types – so variable and adaptable that attempts have been made to assign them to at least 50 separate species.

Brown trout were introduced in the U. S. and Canada in the second half of the 19th Century from Germany and England.

It has been the experience of many anglers that any brown of significance (over 5-pounds) is principally susceptible to sub-surface presentations and ate only “big” bait mimic flies or just hefty tied streamer and attractor patterns. These reported brown trout experiences have over the years covered Iceland, New Zealand, South Africa, Argentina, Chile, American West, Pennsylvania, Colorado, Idaho, Montana, Ohio, North Carolina and Georgia.

One of the Southeast’s (Georgia, Tennessee, North Carolina) most prolific big trout guides, Chad Bryson, fishes big articulated flies. There is no better road to success than to copy what works. If you tie or want to buy what catches, you can reach Chad at The Fish Hawk – ask for his video or order flies. Seasonally, terrestrials like this Male Calico Pennant Dragonfly will drive trouts and bass into airborne attacks.

• Trout throughout the world, except for anadromous types (sea run brown trout and steelhead**), in riverine habitats feed 80% or more on sub surface life forms. There are exceptions, but they are temporary proprietary food sources like terrestrials –  grasshoppers and dragonflies.

• Most importantly, trouts will not expend more energy chasing something that has fewer calories than it burned to capture. For example, a 10-pound brown trout will not move a few feet to pick off a #20 anything. This would not be true while spawning and paired up in a redd, the reaction there is protective – if a sub-surface fly.

• Exclusively fly fishing for big browns requires the resources of time and willingness to be skunked. It is not likely anywhere in the world that in a single day outing, fishing exclusively for big brown trout will probably be rewarded. Think unusual armament, too – 7/8-weight rods and 6-inch long articulated flies eliminate those 15-inch rainbows.

Featured Image is Chad Bryson holding a client’s brown caught on the “Hootch” (Chattahoochee River in Georgia). The fly . . . Image by Bryson.

Anadromous (an-add-dro-mus) fish live at sea and reproduce in freshwater. All salmon are anadromous except land locked versions.
** Steelhead and rainbow trout are the same trout, Oncorhynchus mykiss. In the early stage smolt of life, natural selection takes place. It is tipped off by aggressiveness. The more aggressive being steelhead. Anadromous behavior only occurs where there is access to the sea or as stocked in the Great Lakes, for example. That natural selection of stay or go to sea is also Darwinian – survival of the species.