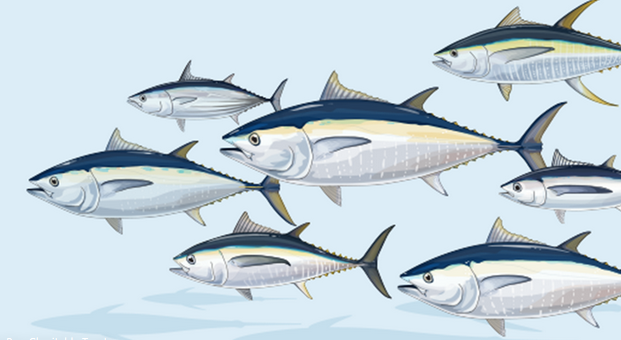 [dropcap]T[/dropcap]aken together, the seven most commercially important tuna species are among the most economically valuable fishes on the planet. Collectively, skipjack, albacore, bigeye, yellowfin, Atlantic bluefin, Pacific bluefin, and southern bluefin tuna1 inhabit all of the tropical and temperate waters of the Earth’s oceans—and support artisanal and industrial fishing wherever they exist. Canned and other shelf-stable tuna products provide plentiful and inexpensive protein to markets around the world, while smaller amounts of high-quality tuna steaks and sashimi make their way to affluent markets in Asia, Europe, and North America.

Ecologically, tuna are a vital part of marine systems. Their importance in food webs as predators and prey is difficult to monetize; however, these iconic species are known to play a fundamental role in open ocean ecosystems.2 That makes maintaining their health critically important to human communities that rely on them for food and economic well-being, particularly at a time of global ocean change.

This report, in which The Pew Charitable Trusts presents the first effort to estimate the full global value of the primary commercial fisheries targeting these seven tuna species and the value of the resulting products, summarizes and discusses the findings of a much more detailed analysis that Pew commissioned from Poseidon Aquatic Resource Management Ltd., an independent fisheries and aquaculture consultancy based in the United Kingdom.3 Estimating the economic contribution of these fisheries informs and highlights the urgency of ensuring that the systems that govern the global ocean are robust and effective. Action is needed to guarantee a healthy and stable future for these species, as well as for the communities and businesses that depend on them.

The findings are based on information gathered on tuna fisheries and markets for 2012 and 2014.4 Based on the analysis of available data, commercial fishing vessels in 2012 landed about 4.6 million metric tons of tuna worldwide. The estimated dock value, or amount paid to fishermen, was US$12.2 billion.* The estimated end value of this tuna—the total amount paid by the final consumer—was at least $33.3 billion. The estimate rose significantly when the entire price of a can of tuna, beyond the value of the fish alone, was used. In that case, the end value in 2012 was estimated to be $41.6 billion.5