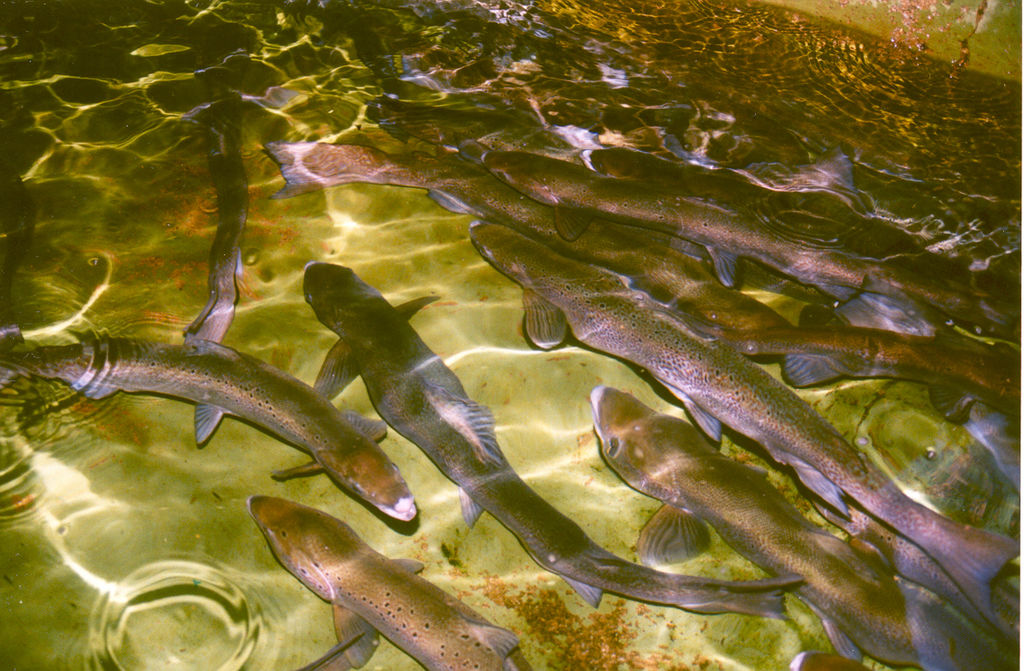 Conservation: So, what does happen after dam removal? 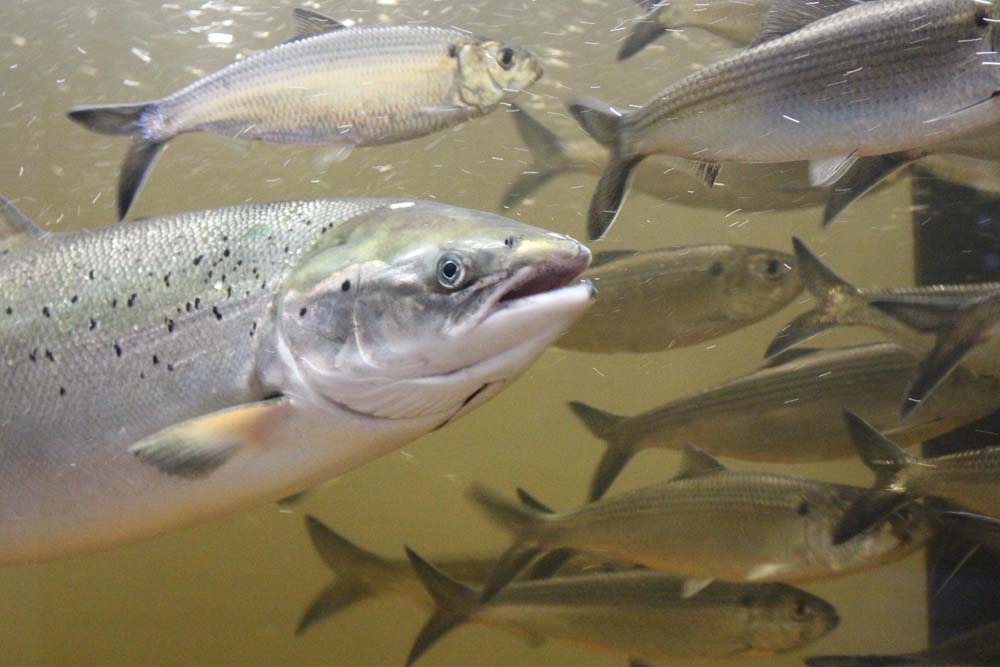 An Atlantic salmon makes her way through the Milford Fish Lift and upriver to spawn in the Penobscot. The Nature Conservancy, C. Daigle, 2014.

Maine’s Penobscot River has more than 100 dams, many of which are aging and no longer serve their original purpose. Removing dams is becoming more common to address hazards posed by these aging dams, returning natural river flow and function, or both. 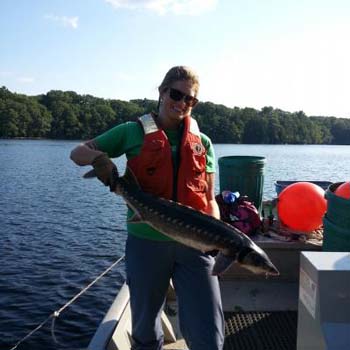 For Atlantic salmon and other species of sea-run fish, the last 200 years of dammed rivers and disconnected streams have, combined with historic fisheries and lower marine survival, spelled decline, and for Atlantic salmon, disaster. The storied Atlantic salmon runs had fish returning in the thousands to Northeast rivers. They are now limited to just a few rivers in Maine, with fewer than 2,000 fish returning each year. These runs are heavily reliant on hatchery-raised fish. The Penobscot River is home to the largest remaining population of endangered Atlantic salmon in the United States. Dams have been identified as one of the primary factors in the decline of Atlantic salmon.

Over the last decade, researchers have been studying whether removing two Penobscot River dams in 2012 and 2013 improved ecosystem conditions for salmon and other aquatic species. So far, results are promising.

Monitoring Is a Key Part of the Plan

Researchers realized that gathering data on the river conditions and fish dynamics before and after dam removal would be critical for understanding the impacts. Planning for a coordinated monitoring framework began as soon as the agreement was signed. In 2009, the Penobscot Project received funding from the American Recovery and Reinvestment Act. The grant included funds for long-term monitoring to assess the impact of dam removal on this large river ecosystem.

CAPS:Penobscot Nation Water Resources Program Manager, Dan Kusnierz, leads the research of water quality conditions through before and after monitoring of chemistry and benthic macroinvertebrates in the Penobscot River. The Nature Conservancy, Bridget Besaw, 2010. 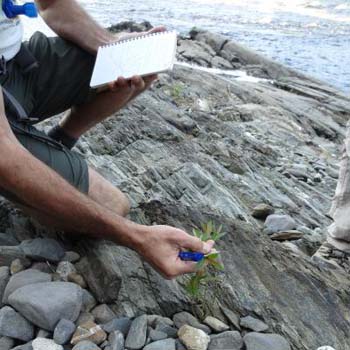 With this funding, the Penobscot River Restoration Trust, a non-profit group formed to execute the Penobscot Project, worked with project partners like The Nature Conservancy and NOAA Fisheries. They developed an effectiveness-monitoring program with an emphasis on river geomorphology, water quality, fish passage, and species-specific monitoring. This program funded nine long-term studies, chosen to complement each other and to broadly assess the response of important ecosystem components:

Each study collected between 1–3 years of pre-removal data and multiple years of post-removal data. Some studies have continued for nearly a decade after the last dam was removed. Complementary research by partners on the river also took place on a similar time frame.

CAPS:Listed as endangered under the ESA, shortnose sturgeon are native to the Penobscot River. University of Maine researchers measure and monitor these species to see if they will begin using the river for spawning and rearing young now that they have access to 100 percent of their historic habitat. The Nature Conservancy, E. Aldrich, 2014. 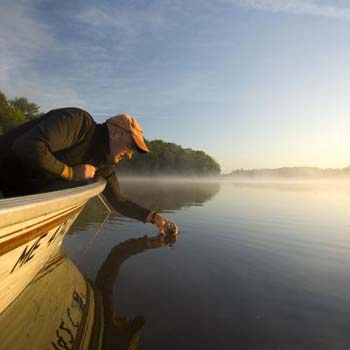 Penobscot Nation Water Resources Program Manager, Dan Kusnierz, leads the research of water quality conditions through before and after monitoring of chemistry and benthic macroinvertebrates in the Penobscot River. The Nature Conservancy, Bridget Besaw, 2010.

Initial results show that the lower mainstem river is benefiting from the return to a largely free-flowing state. After the removals of the dams, monitoring data showed that there were only relatively minor changes to the river channel shape and bed texture, and water quality remained good. This is likely because the dams did not store much sediment or substantially control streamflow. These circumstances are not unique to the Penobscot. Where they can be documented, removals can proceed with greater public confidence and often at a lower cost.

Fish passage studies show improved downstream and upstream migration for Atlantic salmon. Fish passage through the former dam impoundments is now statistically similar to free-flowing river sections. For the first time in nearly 200 years, shortnose and Atlantic sturgeon, both of which are listed under the Endangered Species Act, are able to access 100 percent of their historical habitat. Fish communities in formerly impounded river reaches have fewer slow-water species and more fast-water species and migratory fish, as expected with the changes in flow and access conditions.

Studies are still being conducted on how the plant communities around the impounded areas may be changing. The pre-removal data showed that non-native plants primarily inhabited the areas will assess the composition of newly formed wetland and riparian areas in summer 2022.

A pre-removal study on food-web dynamics supported the expectation that there would be no connection between the marine and riverine ecosystems. The river was a nutrient exporter with no import of nutrients from the marine environment. Post-removal data collection was initiated in 2020 and will help us evaluate if that has changed. 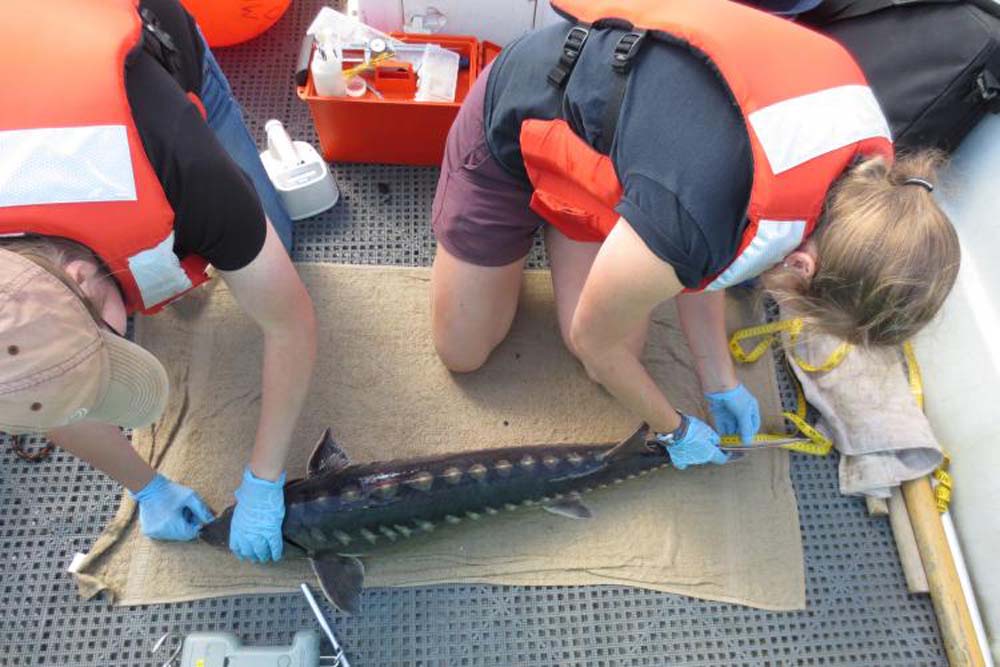 Listed as endangered under the ESA, shortnose sturgeon are native to the Penobscot River. University of Maine researchers measure and monitor these species to see if they will begin using the river for spawning and rearing young now that they have access to 100 percent of their historic habitat. The Nature Conservancy, E. Aldrich, 2014.

Our studies show encouraging results so far, both for the Penobscot River ecosystem and for critically endangered Atlantic salmon. While Atlantic salmon recovery still has a long way to go, the outcomes we have observed demonstrate that those dam removals can better environmental conditions for Atlantic salmon and other sea-run fish. We continue to collect data on biological responses over longer periods, and we look forward to seeing what they reveal. Meanwhile, the tangible benefits measured at our site to date may indicate what can reasonably be expected from future dam removals in similar settings. 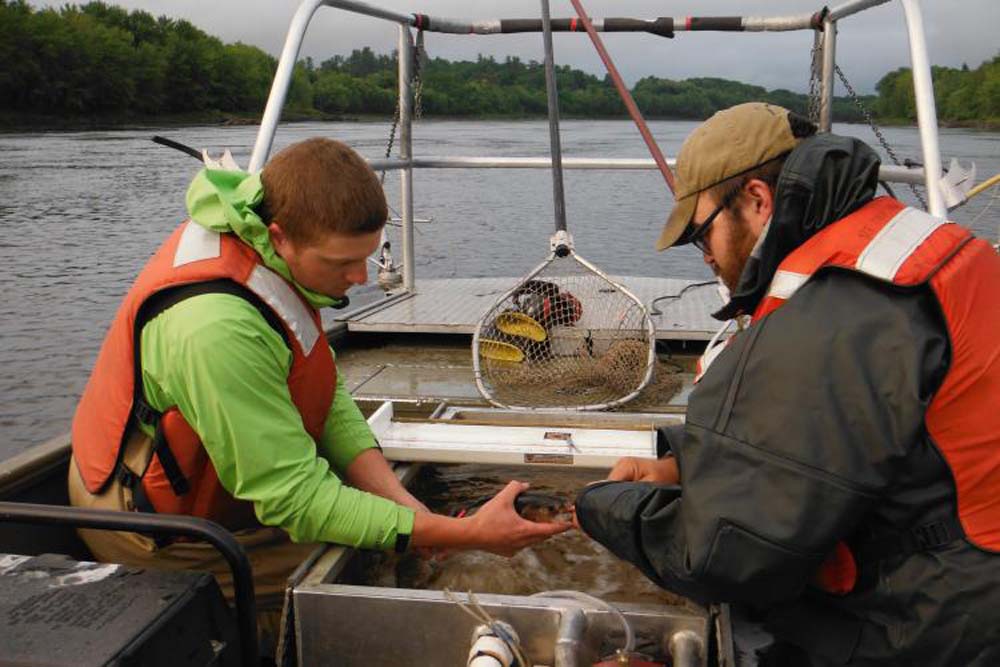 For a list of scientific articles on this project and related research, see NOAA Resource file.