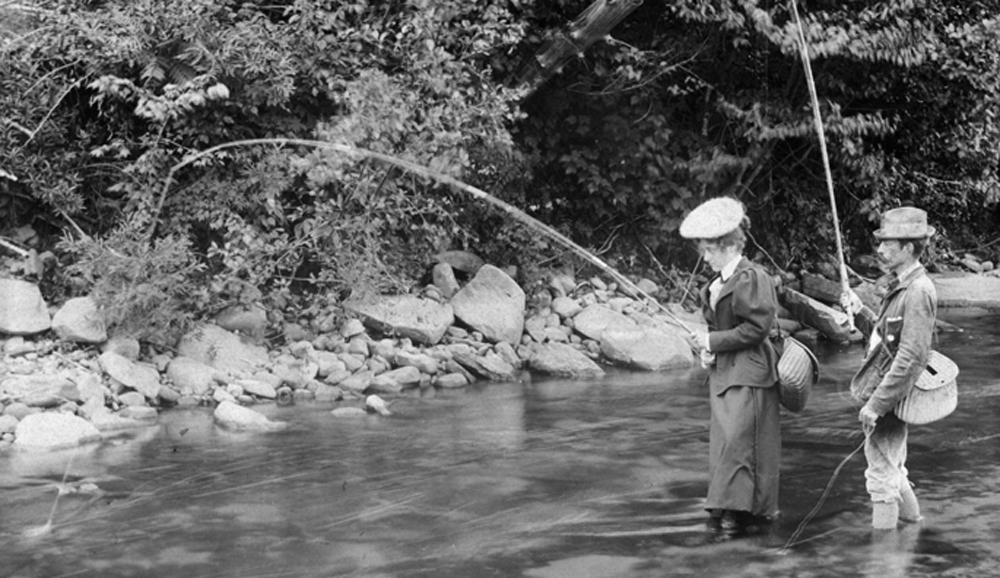 No crying in baseball? Vladi says no indicators or sighters in nymphing

Rainbow, Brown, and Brook [top to bottom]. The rainbow is a westerner by birthright and includes the steelhead, which is the same animal Oncorhynchus mykiss, and the brook is a native easterner, but is a char [Salvelinus fontinalis] with Maine and Eastern Canada the remaining home for the big boys. Salmo Trutta [brown trout] is a visitor from Europe. This illustration is reprinted with permission by the artist, world-renowned watercolorist Thom Glace.

One of our oft time contributors, world-renown watercolorist artist, but less than famous fly fisher, Thom Glace, and I talk about the difficulty factor of angling for our favorite freshwater fish [Brown trout (Salmo trutta), rainbow trout (O. mykiss), and brook trout (Salvelinus fontinalis)]. And we always end up on the  subject of nymphing

Leading up to this nymphing story, I wanted to get the thoughts of everyday fly fishers from the heart of the northeast, where much of modern nymphing technology has come. Thom suggested I contact TCO Fly Shops, a four-location operation stretching from Joe Humphreys‘ State College, Pennsylvania, turf that now features Domenick Swentosky and George Daniel. George, by the way, is a former store manager for TCO.

My question to Lenny Gliwa [lenny@tcoflyfishing.com], store manager of the Boiling Springs, Pennsylvania,  fly shop was what are the most popular nymphing flies in the considerable influence of TCO’s regional impact? 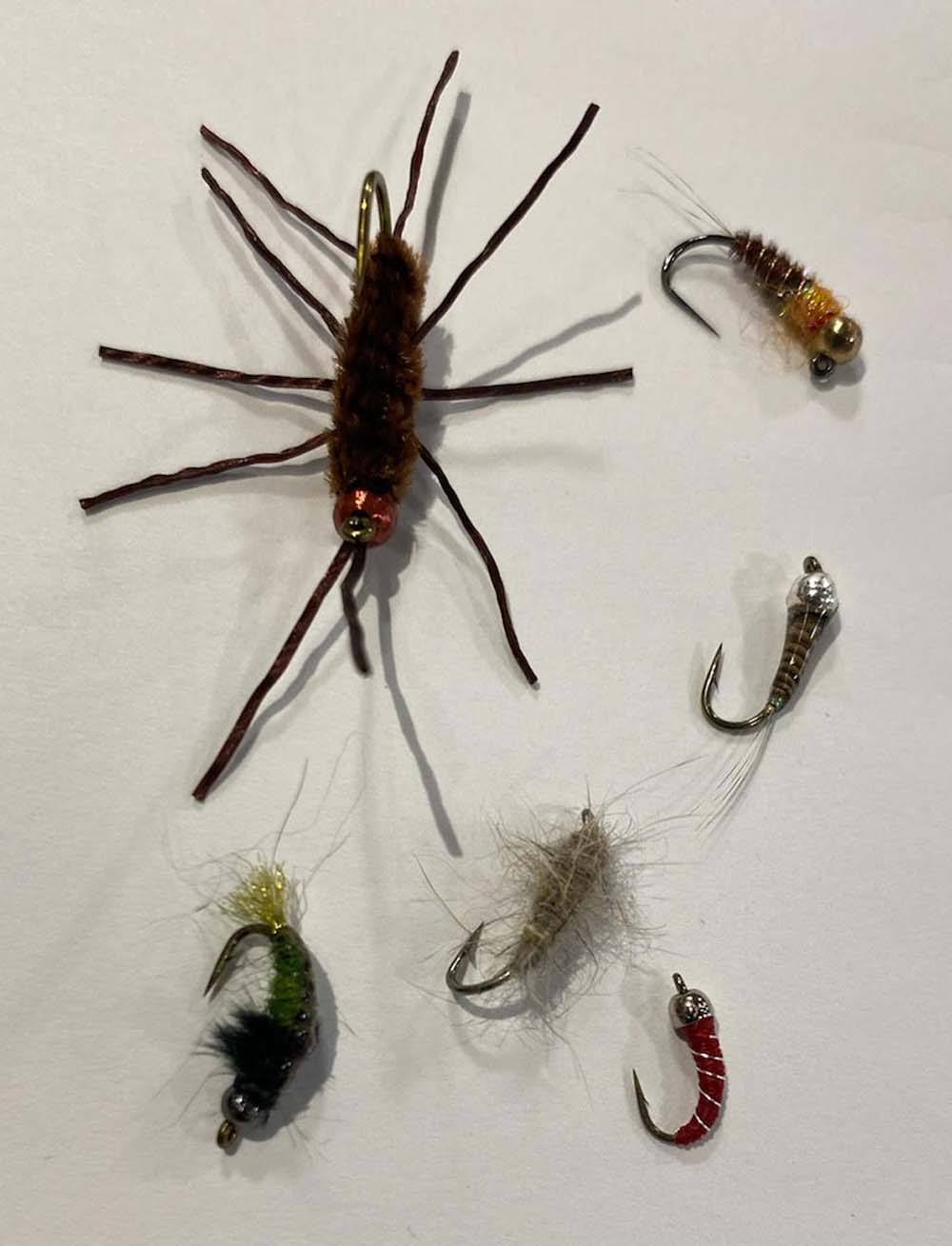 1. Top is a large black Stonefly which does not morph into a Dun and fly off – it crawls out. Its casings found streamside. 2. At 1:00 o’clock Frenchie – a Hot Spot Pheasant Tail is a fantastic all around mayfly imitation with a small hot spot trigger. 3. At 3:00 o’clock Perdigon – a popular new style of nymphs that has taken the Euro world by storm. 4. Middle of the bottom three flies is beadless Walt’s Worm – the quintessential Pennsylvania nymph. Walt Young is best known for his simple creation that simply works everywhere I take it. Bottom right is the Zebra Midge – found in a large numbers of spring creeks in Pennsylvania where midges are a crucial food source. Bottom left is Caddis Larva – found in just about every stream in the country that supports trouts. Lenny Gliwa: ‘We use these patterns in a variety of sizes and weights. If European style (Contact) nymphing, we usually like to use tungsten beads to build weight into our flies. However, there are certainly times and places where we utilize brass beads or no weight in the patterns at all. All situational.’

My friend and oft angling companion Angie Roth is the picture-perfect nympher. She never strays from tried and true – like a walking, talking tutorial on exactly how Kelly does a drop shot.

• Angie’s primary down fly is almost always a tungsten beaded ‘nymphish’ thing in +/- #16 or #14, which she orders online from various suppliers. She never got suckered in on flies from abroad. She never fishes her fly high in the water, or bounces her fly along the bottom. She always fishes that tungsten a few feet from the bottom – once that coordinate is determined for each of the day’s runs. See Kelly Galloup’s sketch. 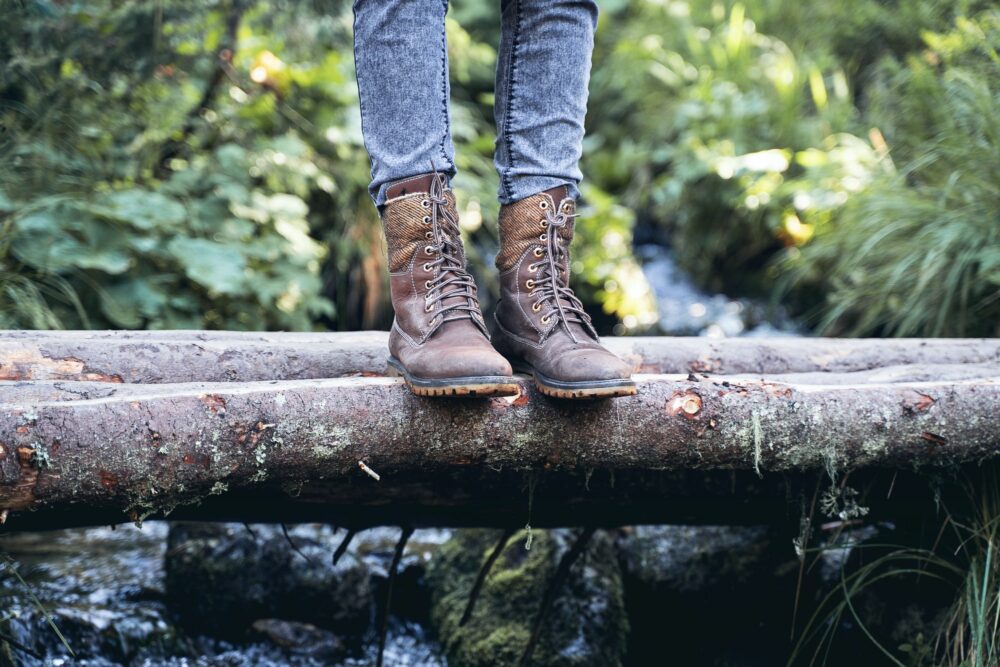 Angie prefers anonymity but couldn’t resist proof she can manage the new crossing on her Eberle family farmstead without a creek splat. I walk around to avoid a creek splat, but I get to carry her rod and backpack, and Daisey, her dog, wisely follows me.

At Red’s Fly Shop in Washington State, Joe Totter sees the set up a little differently 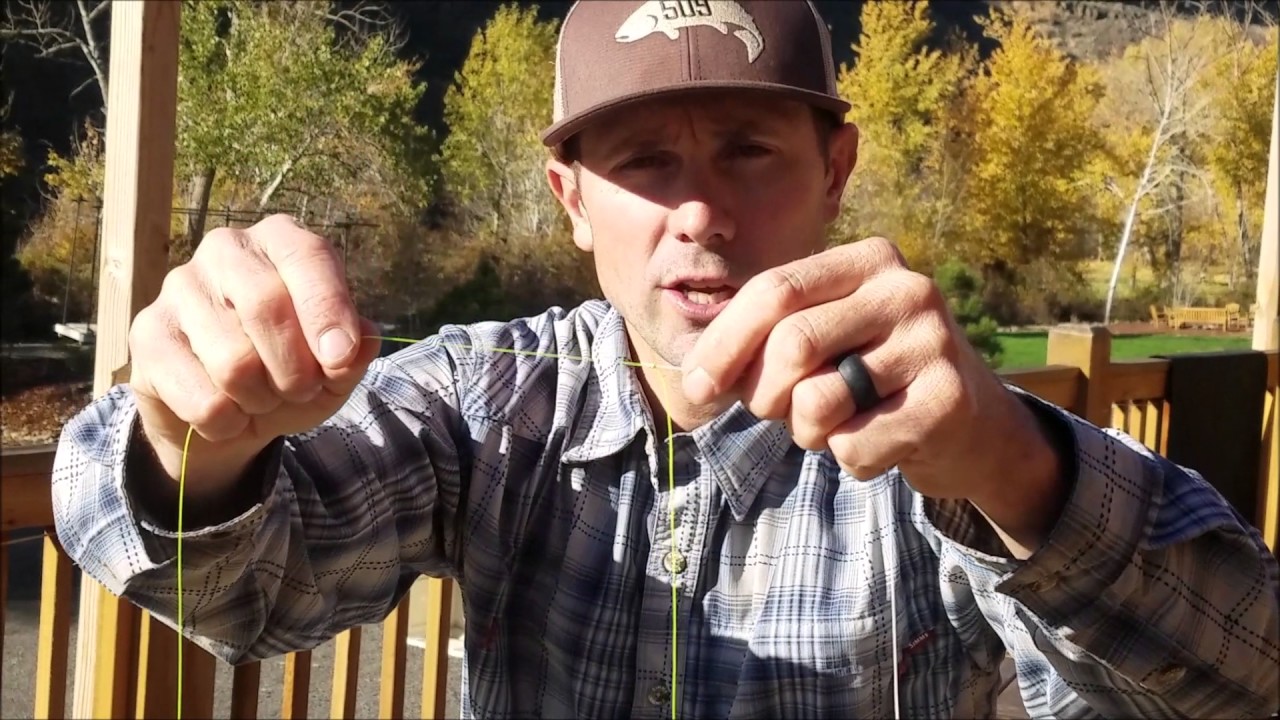 Joe Totter showing how he sets up his nymph rig.

So far, George Daniel has made it his life story understanding nymphing and has a long list of novitiates 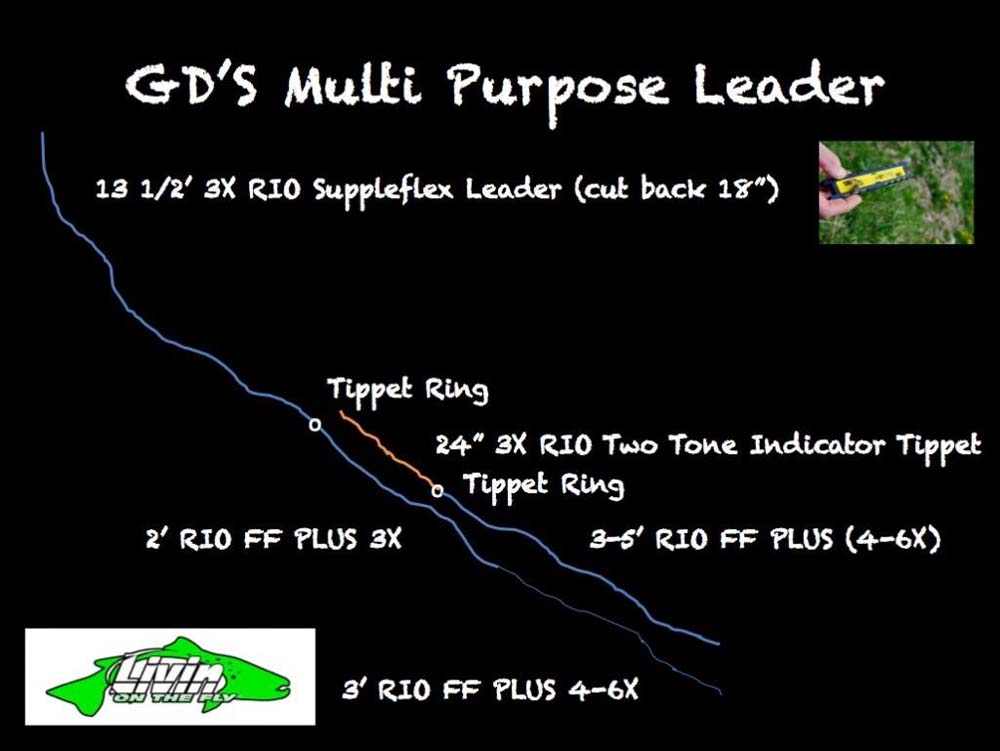 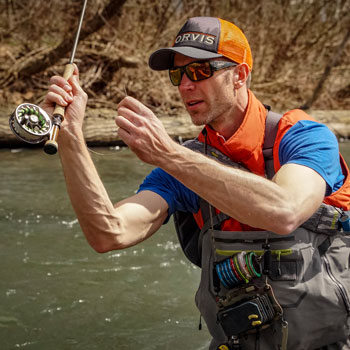 George Daniel is the author of may articles and a book on the subject of nymphing.

In a time where specializing seems to be the norm in the fly fishing, it’s nice to know that there are multi purpose tools available. First, I do have to admit that I’m a gear junkie. I enjoy testing out all the latest gear the fly fishing industry has to offer. Within recent years the industry has answered the call from anglers to develop specialized gear to handle specific angling situations. For example, the call to develop long light rods to handle European nymphing scenarios has been answered by a number of manufactures. Fly lines have been developed to target carp. And leaders were developed to handle everything from tarpon to spring creek trout.

While I rely heavily on these specialized tools, there are times when I look for equipment that can handle a number of scenarios. For example, near my home in central PA I may have the option bounce back and forth from catching fish on nymphs to dry flies. Instead of having to change out leaders every time I decide to switch tactics, I prefer to use an all purpose leader that allows me to use the same base leader but switch out tippet sections to match conditions. This is especially true during hatch season in central PA (April through June) where there’s a good you can walk upon some trout sipping the surface.

Most often anglers don’t make the necessary changes due to the fact that it take too long to build another leader or to switch out one leader for another. This is the reason I prefer to use the leader formula I’m about to discuss. It’s important to remember that is leader is not best suited for any situation but can effectively used for both nymphing and dry fly fishing. Also, I want to point out that I prefer longer leaders for both nymphing and dry fly, so you may want to shorten the leader to better match your fishing needs.

Base Leader. The base is a constant-it doesn’t change. The base I choose is a RIO SUPPLEFLEX LEADER. I prefer to start with the 13 ½’ 3X diameter and cut back approximately 18 inches to give me a 12’ base tapered down to 2X.

If I choose to nymph fish, I’ll attached 24 inches of RIO’s 3X TWO TONE INDICATOR TIPPET to the tippet ring attached to the base leader. Then off the Two Tone Indicator Tippet I attach a second tippet ring. Off the second tippet ring I’ll attach my tippet followed by my nymph(s). Tippet length is base on personal preference and conditions but my tippet length usually runs between 3-5’ back home. Remember, the idea is to keep the two tone indicator mono out of the water to allow a better visual. This is the basic nymphing rig attached to my base leader.

However, if a hatch occurs and I begin to see fish rising-I’ll cut off the entire nymphing rig (that is the two tone indicator tippet and rest of tippet and flies) below the first tippet ring. That is, I snip the rig below the top tippet ring and wrap the nymphing rig around a storage device and stash it in a pocket.

Then on a separate storage device, I have dry fly rig that has two tapered sections of tippet to help turn over the light dry fly. The tapered section starts off around 2’ of 3X followed by 3’of 5-6X FLUOROFLEX PLUS TIPPET attached to my dry fly.

The base leader along with the two storage devices (pre-rigged) allows me to bounce back and forth from dry fly to nymph and vise versa. Again, my leader design is just example of what works for me, so please go out and experiment to find a system that works for you.

Were they nymphing and not know they were? Catskills fly fishing in the 1800s. Notice the guide’s left hand – he’s got two stringers with God knows how many fish and probably indigenous brook trout, which would soon be nearly extinct due to human activity. A Wikimedia commons image. More on modern nymphing 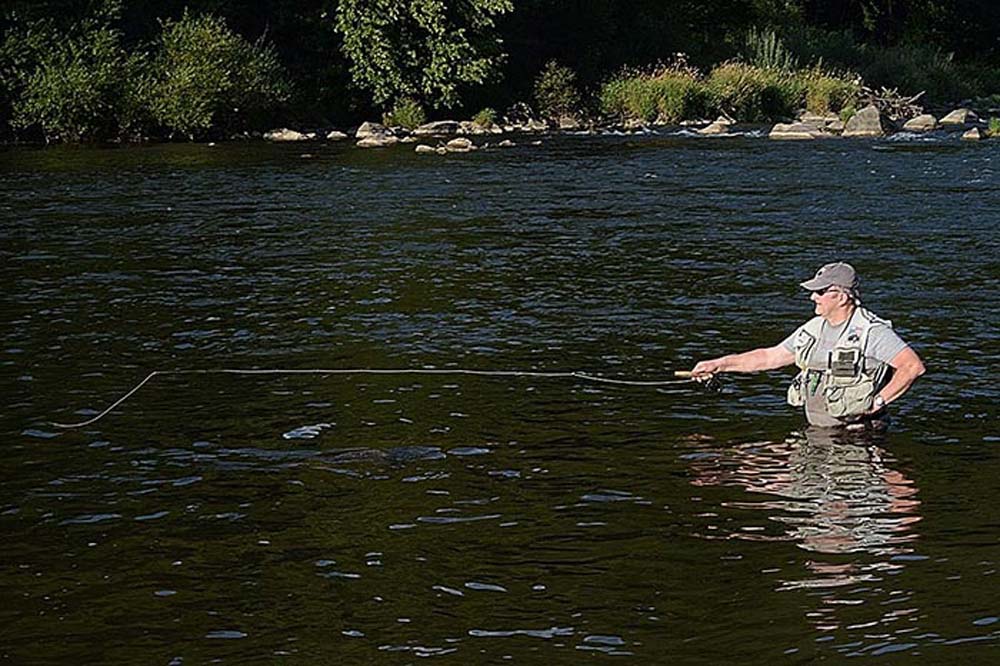 Okay, there’s no crying in baseball, but Vladi says there’s no indicators, sighters, yarn, or colored line in nymphing?

• The Polish method works best in fast water, perhaps no deeper than the middle of your thighs, about three feet. For example, the tail-outs of pools, or just downstream from riffles are great feeding locations for this method even if the water is a little off-color.

• Typically, your leader should be a little more than 2/3 the length of the rod. So, for a 9-foot rod, a 7-foot leader would be about right. I use an 8-foot tippet as a leader on my 10-foot rod. If you want to change from using a floating line to fish dry flies, just keep the same line and change your tapered leader to a straight tippit that will sink much faster and you’re all set. Remember, you’re not casting the nymph(s); you’re just lobbing them upstream.

There are no indicators, sighters, yarn, or colored line to use. This is an active, not passive, way to enjoy fishing. You’re triggering a strike, not standing there waiting and watching a bobber float by. You can use either a single weighted fly or a multi-fly rig. With a multi-fly rig, one of the flies (the anchor-fly) must be heavy enough to bring the flies to the river’s bottom quickly. Remember, the flies are not in tandem.

• I usually hold my rod parallel to the water as I pull the fly downstream. Then I raise it a little when the fly is even with me, and let it drift past a few feet and rise toward the surface. Just before I start to pick up my line to lob it upstream again, I set the hook to an imaginary fish. I’ve been amazed how many hook-ups I get because trout and grayling are likely to follow a food item that is quickly moving around in the current and will often eat it as it rises. If I don’t get a strike in two or three upstream lobs, I sidestep downstream about three or four feet.

• The unique combination of the fish’s lateral line and vision is designed to specifically to detect the motion of predator or prey, which is why Vladi’s method seems like  the obvious way to nymph. After you lob the fly upstream and feel it touch the bottom, I start pulling the fly downstream a little faster than the current. That’s the key: pulling faster than the current. — Richard R. Twarog/Orvis

For Wladyslaw Trzebunia the down fly was crucial – pulling  dual-duty of providing weight and catching fish. Wlady’s ‘anchor’ fly was worm-like, aquatic or otherwise, and copied from his father who taught him both the value of the “Polish” nymphing technique, the fly, and how to swim it. And as you might expect, Wladi’s a poor man’s fly for sure.

In the European nymphing disciplines, “anchor” flies are those substantially heavier flies that are used to take a cast of droppers to the stream bottom. Some may call them “sacrificial” because they do not expect to take many fish on them. However, this does not need to be the case. Anchor flies can indeed pull dual-duty of providing weight and catching fish.

Anglers experienced at the art of fishing weighted flies are quite adept at fishing small flies in some pretty violent water with great success. But there are times when a heavy anchor is required and thought should be used when choosing such a fly. Ideally, the fly should be a fish catcher while doing it’s other job of getting the droppers deep-all without excessive hang-ups. — Loren Williams