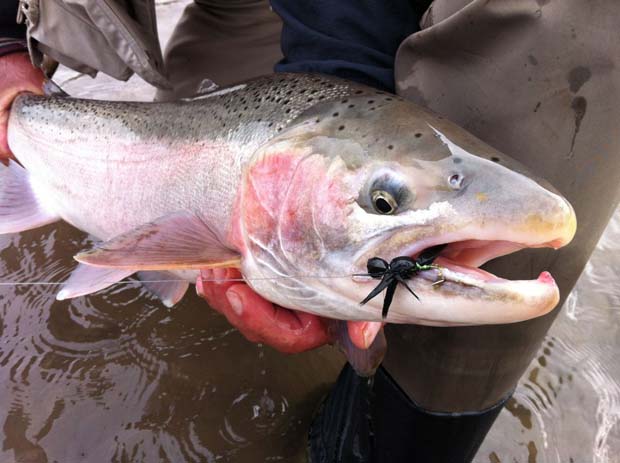 Conservation: Steelhead study will alarm fisherman of every stripe

[dropcap]T[/dropcap]here are few species of fish as vulnerable as wild steelhead. These fish are beset on all sides by threats both natural and man-made. With their numbers dwindling, it’s safe to say, every steelhead counts. It’s vital that those of us who fish for them practice the best catch-and-release practices.

However, common landing practices can kill fish without the angler ever knowing. A team of biologists studying steelhead in British Columbia discovered this problem, quite by accident. These scientists were tagging steelhead with GPS trackers. They determined that the least intrusive way to capture the fish was, well, the same way we do it. With a fly rod. They landed the fish, tagged them with the GPS device and released them. When they went to their computer to track the fish’s progress they discovered something alarming.

Within two hours many of the fish they had tagged, and released in good health, were dead. They collected the fish and performed autopsies to determine what had gone wrong. In every case the cause of death was head trauma. It turns out that ‘steelhead’ is a misnomer. The fish’s head is, in fact, its most vulnerable spot.

When landing the fish the researchers had played them into shallow water where they would be easy to tail. As the fish came into the shallows they were on longer, fully submerged. Without the resistance of the water surrounding them, their powerful thrashing was able to generate momentum that is not possible underwater. The flopping fish simply hit their heads on a rock.

The fish appeared fine when released, but their injured brains began to swell and soon they were dead. It makes perfect sense if you think about it. Fish have evolved in an environment where hitting their head on anything with enough force to cause damage is almost impossible. Their brains lack the natural protection enjoyed by terrestrial species.

Luckily, this unfortunate outcome is easily avoided. The angler has a couple of good options. Landing fish by hand in knee deep water is a little tougher but much safer for the fish. You can grab the leader to control the fish long enough to tail it. After a fish or two it will feel very natural. When possible, it’s best to use a good catch-and-release net. This is safest for the fish and easiest for the angler. A net helps you seal the deal while the fish is still fresh and requires little reviving.

Always control your fish once he’s landed. Keep his gills wet and support his head in case he makes a sudden attempt to escape. Keeping him, dorsal fin up, will keep his range of motion side-to-side, making it harder for him to injure himself. When possible keep him in deeper water. Never beach a fish when landing him and never lay him on the bank for a photo. It’s just not worth it.

Wild steelhead are a precious resource. Those of us who come to the river looking for them must lead by example and do our best to to be good stewards of these remarkable fish. Their future is, literally in our hands.