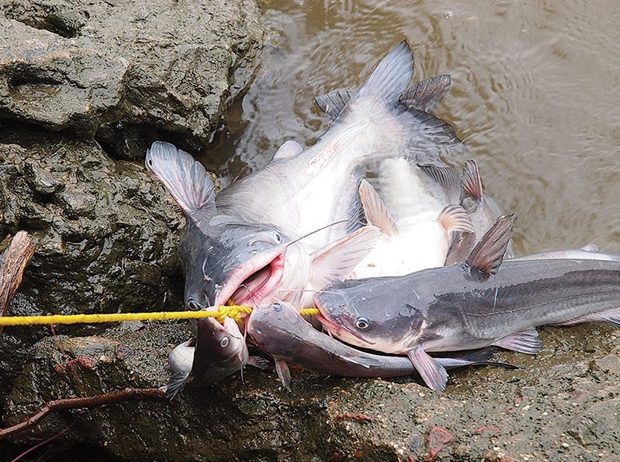 [dropcap]A[/dropcap] new study confirms that nonnative blue catfish around the Chesapeake have the potential to take a significant bite out of populations of important native species such as blue crabs and river herring.

The study examined the diets of blue catfish in portions of several Virginia tributaries and concluded they “may contribute to substantial losses of key fishery resources.”

Those losses could be “ecologically significant” for some species such as blueback herring, whose populations are already at low levels, the study concluded. It also said blue catfish predation could have a greater impact on abundant species, such as blue crabs and menhaden, than previously thought. In part, that is because blue catfish are turning up in higher salinity water than expected.

“To me, the most surprising finding from our study was the extent to which we documented predators much farther downstream in the James — down to the Chesapeake Bay estuary proper,” said Greg Garman, director of the Virginia Commonwealth University Center for Environmental Studies and lead author of the study. “We wouldn’t have expected that.”

It was one of several research projects supported by the National Oceanic and Atmospheric Administration Chesapeake Bay Office to better quantify the level of threat blue catfish may, or may not, pose to other Bay species and resources.

Concerns about blue catfish have been growing as their numbers have exploded around the Bay. The large predatory fish were introduced into the upper tidal James River by the Department of Game and Inland Fisheries in the mid 1970s, a time when introducing new species for recreational anglers was common practice.

Over time, their numbers have dramatically increased. They populate the tidal portions of all major Virginia tributaries, the Potomac. In recent years they have been turning up in many Maryland tributaries, as well.

Blue catfish, which in rare cases can reach 100 pounds, can dominate rivers where they are introduced. In the James River near Hopewell, for instance, scientists estimate they account for 50–70 percent of all fish biomass. Scientists and fishery managers are worried that could mean trouble for native species if they are eaten in large numbers by blue catfish.

The new study examined 1,002 blue catfish 15 inches or longer that were taken from the Rappahannock and James rivers during the fall of 2011 and spring of 2012. They found that blue catfish ate a wide variety of species, including many of management concern such as blue crabs, blueback herring, American shad, softshell clams, menhaden and white perch.