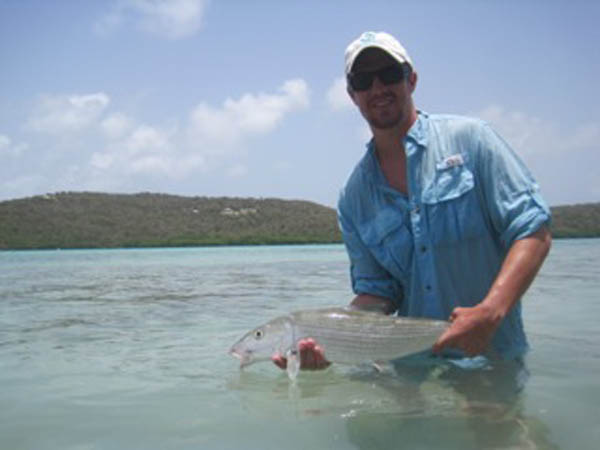 Conservation: Want to adopt a bonefish?

Andy with a Culebra bonefish

[dropcap]C[/dropcap]ulebra, a small island to the east of Puerto Rico, is notorious among seasoned anglers for its unusually large bonefish.  However anecdotal evidence suggests that bonefish populations inhabiting relatively small, isolated, reef flats such as those found on Culebra may be particularly vulnerable to human-induced disturbances such as illegal gill netting and habitat loss.

To learn about their potential vulnerability, an international team of researchers launched a multi-year study examining the movement patterns of bonefish in Culebra.  In the summer of 2012 we began by creating a research infrastructure in Culebra, and deployed an array of nearly 50 acoustic receivers (listening stations) encompassing the entire island, allowing us to detect tagged bonefish and follow their movements at scales as small as a few yards!

After months of testing and fine-tuning, we deployed an initial batch of tagged bonefish and the preliminary data is amazing.  Based on this test of the array, we planned to surgically implant transmitter tags into 30 bonefish in the spring of 2013, collecting data on their movements well into 2015!

Due to spending cutbacks by the U.S. federal government, the grant that made this work possible has been cut by half.  This means we can barely afford to maintain our infrastructure and network of listening stations, and most importantly, that we can no longer afford to purchase and deploy 30 transmitter tags this spring as planned.  In other words, 30 bonefish will be swimming around our extensive array of listening stations in Culebra without any transmitter tags in them, providing us with NO DATA!

How you can help

Adopt a Culebra Bonefish!  We need to raise $19,500 for 30 transmitters to implant in bonefish, with purchase and deployment of each tag costing $650.  Please consider Adopting a Bonefish as part of this project.  As a thank-you, we will name the bonefish tagged in your honor, and you’ll receive a thank-you packet, including a photograph of the bonefish and its personal details, (length, weight, sex when known), as well as bi-yearly updates on their fish’s status!

Don’t let Culebra’s bonefish go another season without providing us with valuable information about how to conserve them!  Adopt a Culebra bonefish now!

Time is of the essence!

The overarching theme of Dr. Danylchuk’s research is to understand the factors that naturally influence the life history and ecology of fishes and other aquatic organisms, as well as how natural and anthropogenic disturbances can influence the dynamics of their populations. His work spans both marine and freshwater systems, and includes stress physiology, behavioral ecology, spatial ecology, predator-prey interactions, and adaptations in life history traits as a response to disturbance. Much of Dr. Danylchuk’s research focuses on evaluating the potential impacts of recreational angling on fish populations, and working with stakeholder groups to develop best practices for the recreational angling community. Some of this work involves the use of telemetry and associated emerging technologies to understand the ways fish function under ‘normal’ and disturbed conditions, and combines the results of these studies with laboratory and field manipulations to identity specific mechanistic causes of stress in fish. Dr. Danylchuk is also interested in sustainable aquaculture and the development of integrated food production models as a mechanism to reduce impacts on fish stocks and local, regional, and global ecosystems. He is also a strong proponent of experiential, hands-on opportunities that can enhance learning for students of all ages.