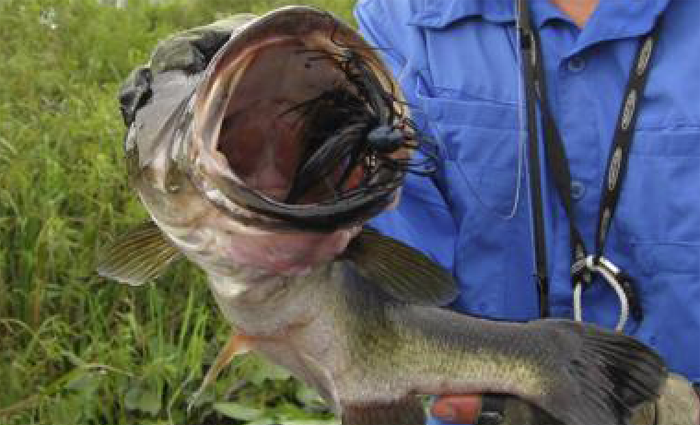 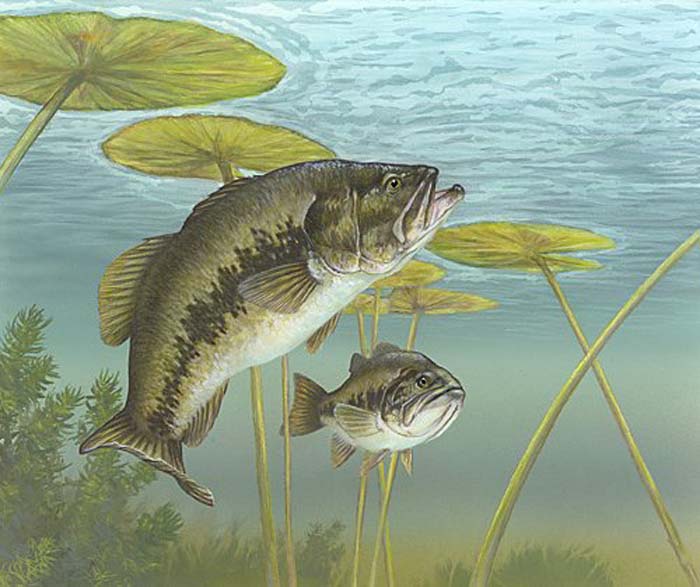 The largemouth bass [Micropterus salmoides] is the state fish of Georgia and Mississippi, and the state freshwater fish of Florida and Alabama. Painting and photo by Timothy Knepp – US Fish and Wildlife Service, a commons image.

Going with the corporate flow works out, sometimes

My friend Mike, whom I coaxed into fly fishing about four years ago, has become a zealot. He’s a bait fisher by training and has a locker full of fish meat, everything from cats to carp and mullet to panfish. I’ve come to enjoy Redneck cooked catfish, and if you haven’t had a Deep South prepared mullet, you don’t know anything about good tasting fish.

Anyway, he’s into fly fishing with my old Powell 7-weight, and Scientific Anglers System 2 Model 7/8 fly reel. He’s a finish-work carpenter and a true craftsman. The kind that make 45º joints look seamless. He’s got everything to do with his fishing gear looking new and in perfect working order.

Mike had done a lot of work for a corporate client with a noticeable Atlanta presence and a small campus like research property in a North Georgia town. It had a two-acre pond stocked with large, largemouth bass. The pond, a lake really, was cared for professionally by the grounds crew. The pond/lake and it’s resident largemouth bass have nothing whatsoever to do with the corporation’s products or services.

Mike’s contract was to cull the pond of about 45/50 fish over a weekend with the specimens, preferably 5-pounds or more – sold to a fish farm operation in Tennessee. Mike got a flat fee of $900 for the project and had done the same project twice before and all three years apart. Mike had nets, a few odd-looking tools, and three Jon boats for the round-up and a buddy with whom he works to help.

The basses [Micropterus salmoides] to be extracted were pure Florida strain, thus the heft, and preserved by being put in portable aerated holding tanks on a signless truck. Mike asked if I’d like to come along, and we’d do some fishing once we had made sure we were able to complete the project by Sunday afternoon – he’d buy my meals and pay the motel bill.

Man, did we stink of corporate

We worked through Saturday until late, getting more than half the proper size fish into the tanks. We had no trouble finishing in the morning. It was the setup procedures that consumed most of the day Saturday: inspection, security passes, delays because Georgia Dept. of Natural Resources had to inspect and approve the fish biologist from the State of Tennessee, Brad Connor, Ph. D., and his equipment.

Believe it or not, the fish were almost all XL, and collecting wasn’t that easy, but Mike got his system going, and by noon, it went smoothly, fun but hard work. Some of the netted basses had to be IGFA world-record size. The biologist and Mike guessed at least four in the 15-pound class.

NOTE: The world record largemouth bass is 22-pounds, 4-ounces, caught by George Perry in Montgomery Lake in Georgia in 1932.

They will take a monster popper. Image is of and by Thadeus Ragan, my GLADESBASSIN friend and guide  from Miami, Florida. Ragan is a bass tournament circuit pro.

I had tied up a bunch of poppers and back-up streamer-bait looking patterns and bought a dozen cheap frog looking “things.” Curious as all get out, I spent a lot of time querying the fish biologist and learned at least enough to qualify for grad school.

The fish he examined took place in a Class B RV van outfitted with a lab. The stomach content of a half dozen showed a diet preference of worms and leeches, as well as the usual bait fishes, but the leeches showed up in every bass – no matter its size.

So, Saturday night, I tied up about two dozen leeches for Mike and me. Dark brown and black, or mottled olive green, and like shown in the Vimeo by Tim Flagler [below]. However, I tied them all on tube flies with straight eye barbless and slightly offset hooks in #6, #4, #2, and #1 [OPST]. I did not use any junction tubing, all non-slip loop knots [no reason – all anchored by tube], about half the flies with non-lead wire wrapped around the shank for weight, starting an eye length from the eye wrapped to two thirds down the shank – hook facing up. The others I tied with no wire weight and hook facing down with weed guards — lots of vegetation and natural structure.

We finished loading up Doc Connor and seeing him and his truck driver off around 3: pm on Sunday. We were only allowed to fish until 5:30 and had to be gone by 6 pm. So, how was the fishing? INCREDIBLE. The leeches got taken on any cast – good or bad and from anywhere. Mike probably had the biggest at 13-pounds 7-ounces as measured by Mike’s friend Eddie’s scale that had more rust than paint.

Mike and I found this Flagler Vimeo of Landon Mayer’s Leech, a perfect match for the patterns we used on Micropterus:

This pattern, Landon Mayer’s Mini-Leech, and its many variations is like Russell Blessing’s Woolly Bugger, Bob Clouser’s Minnow, Lefty’s Deceiver, and so many more universal flies — good any day of the week, season of the year, and in any color you can think of.