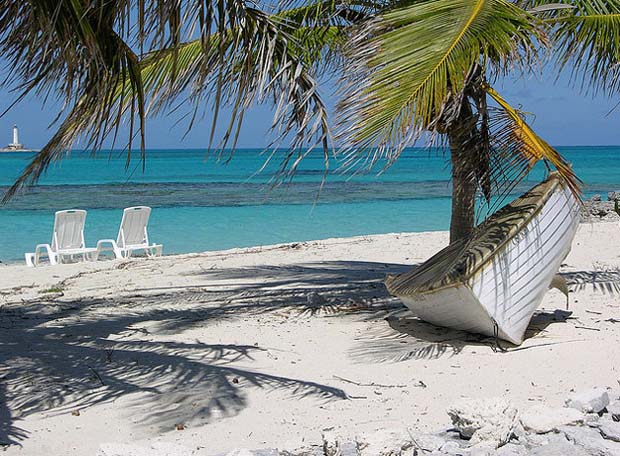 NOTE: Crooked and Acklins islands remain far from the prying eyes of those wanting to impose new flats rules which puts limits and could impose Draconian penalties on foreign anglers. Those who dare fish in two’s aboard a rented skiff or with a non-sanctified guide – November 2017 update, law currently not enforced

By James T. Bailey, Esq. / A November experience past

[dropcap]W[/dropcap]ill Esposito and I were both aware of the fact that fishing Crooked and Acklins islands, Bahamas were possibly the best bonefish destinations in the world. And maybe the best possible Bahamian destinations for a shot at a tarpon and a permit, albeit bigger tarpon is a better option in May and June.

Arranging for a place to stay and getting lucky

The parents of a friend of mine winter on Crooked Island in the Bahamas. I wanted to fish it, and so did Will, my law partner. I phoned my friend Ray to get some info, but he said I’d better connect with his dad because he hadn’t been to the island for a couple of years. Mr. Findlay was as congenial as I remembered him to be. He offered his cottage for ten days for $2,500, and use of their car was included; a steal.

The cottage was in the settlement of Major’s Cay, right on the beach – about three miles from the Crooked Island airport. Mr. Findlay, an excellent fly angler, gave me some great tips including fishing location names, a couple of guides’ names, where to find groceries, places to eat and who to contact if the car had issues and who to call for household services and medical needs info, etc.

[information]In the out islands of Crooked and Acklins cash works, but traveler’s checks and credit cards don’t always work unless you’re at a resort; there are only a few, and they’re usually closed in August and September.[/information]

Will and I booked flights from Washington, DC to Ft. Lauderdale, Florida – touching down in Nassau, the Bahamas on a Friday night. We splurged on an excellent dinner and great wine at my favorite restaurant in Nassau, Greycliff, which is always pricey but very good.

The next morning Will and I took a Bahamas Air flight to Crooked Island (1 hour and 50 minutes both ways). Neither of us had been to the Bahamas late in the fall, or so far south. Wow, is it buggy!

In early November, there were scant few tourists – just Crooked or Acklins Islanders, all 800 hundred or so of them. In ten hard days of fishing, we didn’t see another fisherman on the flats while fishing with the guide Jeff Moss. The Findlay’s recommended Jeff. He is dedicated, accommodating, easy to get along with and very knowledgeable. All of the islanders we interacted with were very friendly, easily engaged and very accommodating. 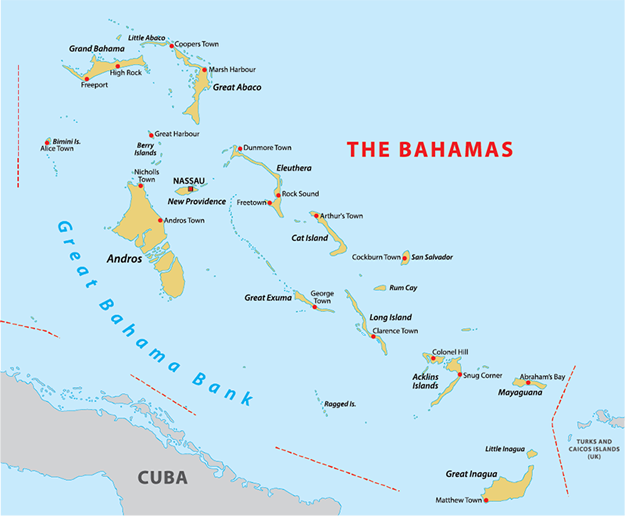 Every day, most of our fishing was wading hard sand bottoms flats that stretched for miles and miles, and some sea-grass flats mixed with some soft marl and coral outcroppings. Each morning we both hooked-up with 12 to 15 bones in the 3 to 5-pound range. We never fished in water deeper than a few feet. Will and I must have seen a thousand tailing bones in our ten days of fishing. We got better and better at seeing the bones as the trip days wore on, but we relied heavily on Jeff.

Casting, it turned out, was more productive long range, up to 70-feet with one or two or three false casts. Both of us just let the fly line drag behind us with at least 80-to 90-feet of fly line (holding leader) and let the line/water tension compliment a quick delivery. The scenarios for bones appearances are small ones in a herd and fast moving in four or more feet of water; tailing, or stopping only occasionally to feed. There are, of course, singles which are always big animals, and that is also true when there are just a few together. The weight of the fly is the most critical factor. Never pull a crab pattern. A crab will only dive for the bottom and would never try to “out-run” danger. A shrimp will run.

Will and I each got one ‘biggin’ in the double-digit range and a few each in the 7- to 8-pound class. Almost all the more significant bones were caught in the evening. We got lucky, tidally, but Jeff said that doesn’t matter much at all. Jeff said, “The bones are always here, but late in the day on an incoming tide brings the XL single bones come in along with the occasional larger permit. The flats you are fishing hasn’t seen much angler activity since maybe June.”  Adding it was likewise with many of the creeks, channels and mangrove-bordered water we fished – inside the Acklins Bight and south to French Wells and beyond all the way to Windsor Point and west to Acklins.

Sun-up to noon-ish, then again in the afternoon 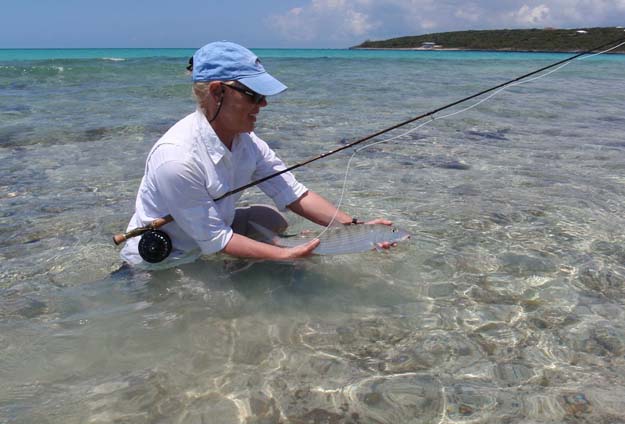 Most days we fished just after sun-up to around 11 am, then it was too hot for us, or just plain too much sun, so we’d head home if the trip was a reasonable distance.

Back at the dock, it was time for a few Kalick’s, then relax in the shade by the cottage in between swims in gin clear, turquoise water. At around 3:30 PM Jeff would pick us up, and we’d be on the flats again at approximately 4:15 PM. It was tarpon-permit time – we went south or west.

It was about 20 minutes to get to the south of French Wells, a good bone and tarpon fishery (creeks, channels, mangroves and more Bight flats). Each trip south (Crooked Island) we saw a few tarpon most days – animals to about 35-pounds (most smaller), but aggressive. We always saw bones and fished them – hooking-up later in the afternoons to more prominent bones in the 6-pound range, and we cast to several singles that Jeff said were 10- to 12-pounds. We engaged permit late in the day on incoming tides. They were mostly smallish, 15- to 20-pounds, but not as shy as any encountered anywhere else I’d fished. Neither of got an eat. We did see larger permit, but they were out of range and then gone altogether. Permit don’t dally.

The fish are not smart because they don’t get pressured – making the fishery one of the best in the world for bones, and probably the best in the Bahamas for a shot at getting the Holy Grail of fly fishing – bonefish, permit, and tarpon in one day. Will did it twice in 10 days.

Scared to death and then, the best day ever 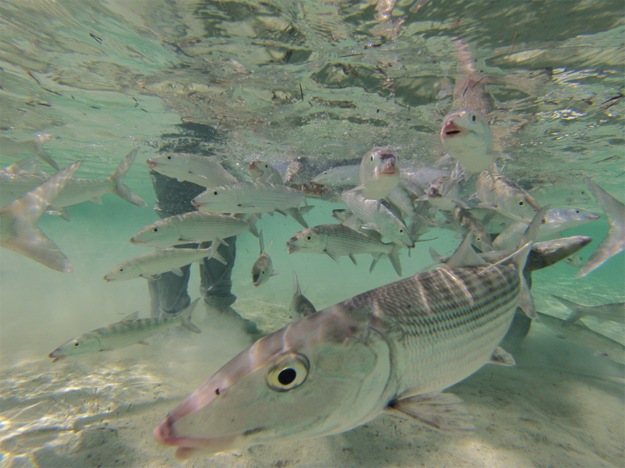 We had gotten lucky with afternoon rain storms except for last day when we got pounded by a flare-up storm. We were too far west (Acklins Island) to make it back, so we weathered out the storm anchored in a channel – tied-off to mangroves. It was sunny, then black, then howling wind, then raging surf and a blinding downpour. However, it turned out to be a short event and later the best fishing day I’ve ever had happened. In the cooled down water, it was a mixed bag: three mutton snappers, two poons and one permit and two big bones (7- and 10-pounds). The latter just before sunset on my 8-weight. Will was as content as I because he too had a Grand Slam that day. We headed in when the mosquitoes started harvesting us.

Never arrive at a destination with less than two fly rods, less than two reels, backup fly lines for both and plenty of leader material

Updated 2017: Winter wind is an issue on the flats from the Florida Keys through the entire Bahamas chain of Islands, Turks and Caicos Islands, and Cuba – starting spottily as early as fall, ramping up in January and February, and lasting into April. Heavy flies are the norm for bones and permit as both pescados primarily feed on the bottom, think mudding and need to get the fly down.

Think fast. A soft action rod can complicate casting – in some cases render it useless on high wind days with heavy flies

Today’s top end, so-called, fast action rods are not at all troublesome to cast – even for those of us who preferred slower action rods in the past. The big, name brand rod designers have figured out “comfort” casting a fast action fly rod. These new, fast action rods tend to make distance and accuracy mutually attainable goals. The old argument of fast action rods not being fly cast friendly on short shots still holds water, but much less than even five years ago.

The robustness of these new rods affords judicious down “weighting.” Where once only a nine could punch through on windy days with a lead-eye fly, a seven can now suffice. That would also be relevant to lifting and turning bigger fish. That said, I’ve found the new, fast action rod I own a better ball player in the 8-weight when hunting flats animals in the Bahamas all the way to Belize.

You are not going to save money going from a nine to a seven or eight weight rod purchase, but both are noticeably lighter – less fatigable. Five days in the brilliant sunlight of the Bahamas flats, zipping around in a flats boat at 40 mph all day, and trudging around wet, lean toward tiring – every ounce counts.

Choosing “A” fly line for bonefishing is now about choosing integrated fly lines or loop to loop add-ons along with running lines, Polyleaders (Versileaders), MOW tips (sink tips measured in grain weights)? It could be a parts business, but well worth it.

The most straightforward explanation regarding the new fly line options can be examined, fully, here… 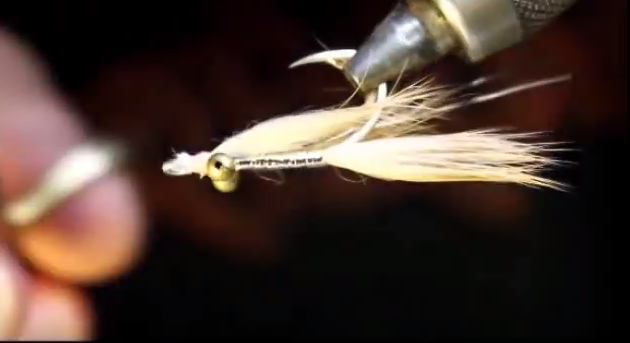 Tan, tan Gotchas, #2 size tied with bead chain eyes; Peterson Spawning Shrimp in a #2 – tied with small lead eyes, which make the large fly swim correctly when stripped; Veverka’s Mantis Shrimp in a  #2  and a #4 for shallower water, and Dean’s Tan Woolly Crab tied with lead eyes – for deeper water (over 3-feet). Capt. Lenny Moffo Merkin with or without rubber legs – must ambulate like a crab and Clouser Minnow. We also had a lot of luck with Jeff’s concoctions, especially so with bones, they looked a lot like Duane Baker’s Crab Fly, which is highly recommended (#1, #2, #3 and #4). They outperformed all others, except maybe Dean’s yarn crab. Tan is the best color.

Needlefish imitations. We caught a few monsters, but not a particularly favored fish for either of us, but a worthy opponent nonetheless.