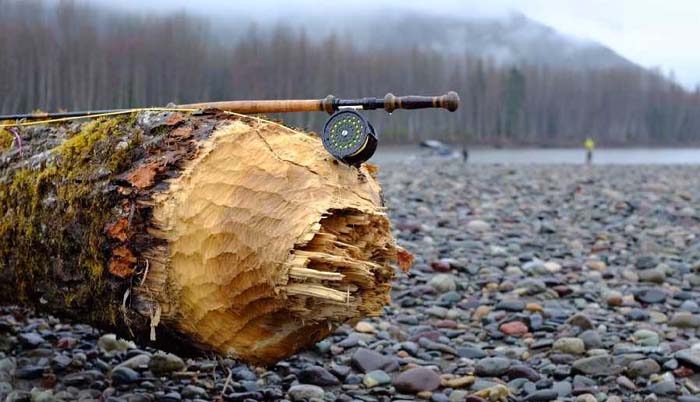 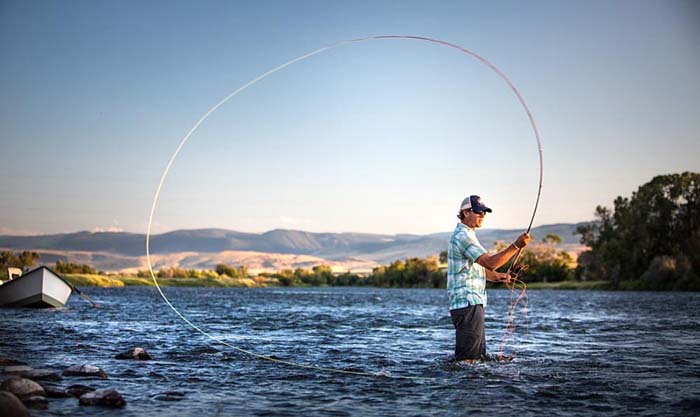 Part One: spey, switch, and conventional 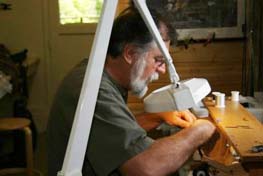 [dropcap]T[/dropcap]he fly dedicated angling community with a modicum of understanding knows that spey rods originated in the mid-1800s on the River Spey in Scotland. The original rods constructed out of wood [greenheart, a heavy wood imported from British Guyana] and over 20-feet long [6.7 m)] and developed for salmon fishing big rivers, long casts and using the fishing technique of a waterborne fly line anchor to launch the cast – and a version of today’s swinging the fly. The Spey River caster repeated the procedure by stepping forward after exch cast. The step forward for each new cast known as “Splash and Go” or “Kiss and Go.” There is more about casting like “Single Spey” and the “Double Spey,” just Google it on your own.

Today, spey [capitalizing of the word dropped] rods are commonly in the range of 12-to 15-feet length. Their original intent casting distance, and covering a lot of real estate per cast remains the prime purpose with the lack of accuracy, kerplunking the fly, unable to quick cast, inconvenience of transport, and useless on a skiff acceptable negatives.

The actual length of so-called spey, switch, and conventional fly rods lengths not determined by any organization – new words like mini and micro commonly added to the “title” of any length “spey” like fly rod by ad agencies or PR firms. The purpose not in any way technical – only attention-getting, but serendipitously very appealing to ‘especial’ anglers. For example, micro spey like Winston’s popular Boron III TH Microspey.

The materials used to make fly rods no longer include greenheart wood, and although bamboo and glass are both making comebacks [glass to stay permanently on the rise], it is graphite the lead dog.

The use of UK kind of spey rods in the US was limited to the moneyed class – sparsely in use along the Boston to DC corridor because of the geology of narrower rivers and streams, and rapidly disappearing Atlantic salmon due to dams and unmitigated pollution.

In the west, however, big water, Pacific salmon, and steelhead were abundant from Northern California to the Canadian Northwest to Alaska. The British spey rods made little sense to Yanks, and big glass rods were literal flag poles. So, when graphite started clumsily making its way into the big fish equation, a revolution of new anglers, rod builders, fishing techniques, casting techniques, flies, and fly fishing minutia emerged in the American West. FYI: The Northwest, and West make up over half the population of the entire U. S. fly fishing population.

R. B. Meiser provided us with the first industry adopted “oversized” single-handed casting fly rod. Or was it an undersized spey rod – hmmm? Let’s call it a switch rod and be done with it – that’s what he called it. Arriving at the name “switch” had nothing to do with rod construction. A funny story for later.

Meiser, fishing spawning steelheads in the tributaries of Lake Michigan (on foot), could not get into bite range with his 9-foot fly rod. His big flies, destined for spawning steelhead, were short of the mark.

All the trout dreamers claim distance, casting long, has nothing to do with catching fish. Saltwater anglers and salmon/steeleeheaders know that to be pure BS.

Bob tinkered with making longer fly rods. He used nearby rod producer St. Croix’s waste drops and began building what he had heard was the next thing of the Northwest for salmons – long rods, but not 22-feet long like the Brits championed. It more than tickled his curiosity and remains a reason to get up excited even today – RB Meiser Fly Rods.

Bob, plunged his efforts into rod building and along the way became friends with notable Northwest “big rod” salmon-steel headers, and the switch rod became a reality.

Meiser’s nine-foot nine-inch fly rod lead the switch way, and it was adopted industry-wide. That first “model” concept remains in high demand at R. B. Meiser Fly Rods. The 909 Series, as it is so-called, is probably the best “boat” fly rod (river, lake, or offshore) and manageable surf fly rod ever invented. The 909s castability with the correct fly line will enable any angler extraordinarily long casts, and unmatched fish fighting capabilities separating it from all other “boat” rods, except maybe the new rods from Henry Fly Rods: in my opinion.

The performance characteristics of Meiser’s 9′ 9″ switch rod fast consumed Sage, Loomis, and all the other rod manufacturers. Today, switch rods line the racks of the better fly shops in the world, but in the Eastern U. S., and inexplicitly, Florida and the Texas Gulf  – not yet. The South known for being stubborn.

Today, switch rods are in high demand in the Northwest, Alaska, Great Lakes, Atlantic salmon coordinates, England and worldwide. But especially so in Scandinavia. There, switch rodding techniques and builds have addressed detail issues like producing better handles (that’s a big deal), and including the all-important handle butts.

A switch rod used to be longer than conventional single-handed 9-foot fly rods and claim useful to the average angler if no longer than slightly over 10-feet feet. The latter length is a reality because it is the limit most anglers can comfortably cast a rod that length single-handedly. Longer, so-called switch rods are on the scene, but their performance grade is better at two-handed spey casts [distance and better coverage], but terrible or at single-handed casting. 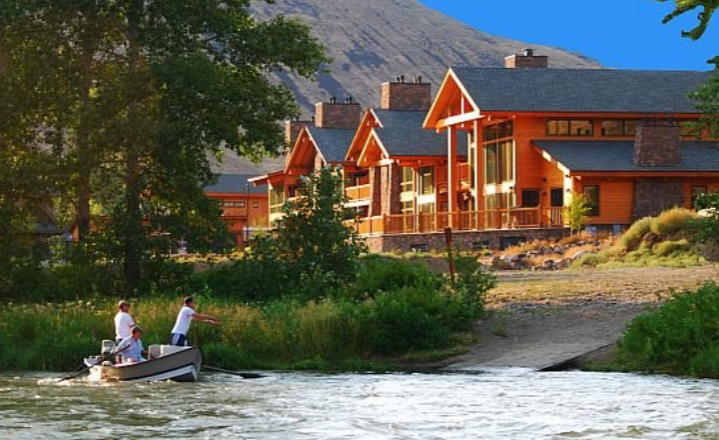 “I agree with you about the limit length switch rods. They are too difficult to manage should an angler need to cast overhand for more than a few casts. For most, it becomes a taxing effort physically, and there would be little or no benefit. However, using the longer versions of so-called switch rods, which are now in the plus 12-foot range, are much better at two-handed casts.”

“Trout anglers that wanted the switch advantage have moved to a newly named fly rod called micro spey. The micro version satisfies the preferred two-handed approach when fishing for trouts. Their switch lengths are specifically for 2-, 3-, and 4-weights.”

Note: Both quotes are paraphrased.

Miller went on to say switch rods are still in high demand in the Northwest, and his shop has no shortage of choices. Red’s has produced numerous YouTube videos on the subject (Google the same).

Switch rods are fun to cast

All other Western fly shop floor manager types I talked had this to say [paraphrasing]. Switch rods are super fun to cast – well worth a test drive, but making it a point to call their respective fly shops for orientation.

If you’re ready, let your fly shop set you up. Like many switch rods diverting from Meiser’s original versions, like micro spey rods, are drifting into the 12-foot range, and these more extended versions of so-called switch fall into clumsy to transport, annoying weapons on a skiff, exhausting to cast on a hard overhead demand casting day, and incapable of making a quick cast. 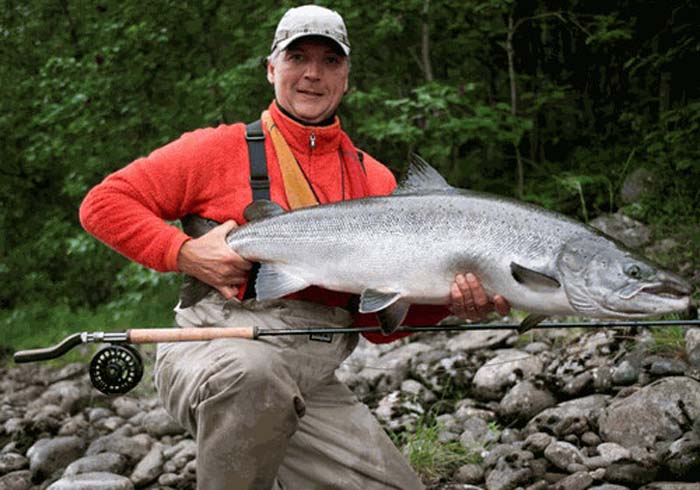 Henrick Mortensen, Zpey rod designer and spey casting guru, with a fresh from the ocean beast. Check out the forward handle and butt grip. Image by Oregon Fly Fishing Blog.

Where the blondes are smarter

If you’re having difficulty using your switch rod: getting distance, being accurate, or tiring because of “working” hard… you’re doing the two-hand cast bass-ackwards. How? You’re using the right hand (if right-handed) as the lever rather than as the fulcrum. ‘Switch’ that up and voilà, you just made your angling life better: cast with less physical demands (shoulder or wrist issues), achieve longer distances, become more accurate, and catch mo-betta.

Rather than talking through the right way to get the best casting results, check Henrik’s video out. His lesson applies verbatim to switch casting.

Is being better a breakthrough?

Now, about the new company, Henry Fly Rods, and its tie-breaking approach to marrying two-handed and single-handed casting, and saying they outperforming any $1,100 fly rod whether 7-feet long or 12-feet long, and specifically fishing them with the intent catching fish and enjoying casting all day long.

Up next week, two guys put over a century of fly fishing mixed with fly rod building experience into Henry’s Fly Rods & a reel – made in the USA.