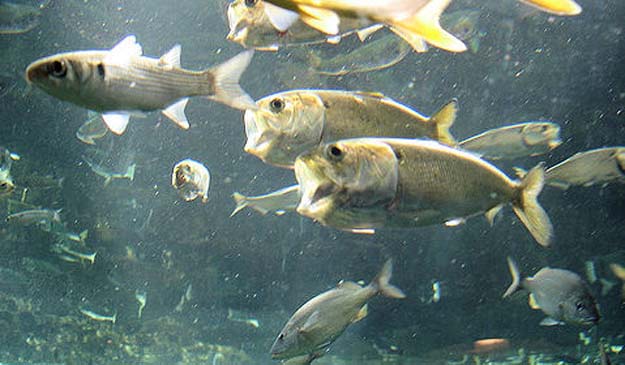 This story is excerpted from the Bay Journal. “Big decision looms over little oily fish that feeds so many others: Fishery managers eye whether to weigh ecological role of Atlantic menhaden in setting harvest limits”  / October 11, 2017 / See link below

. . . scientists and many conservation groups say those figures only tell part of the story. Menhaden should not be looked at in isolation, but as part of the broader marine ecosystem, where the small, oily fish is an essential food for other fish, whales, seabirds and a host of other species.

“We’re probably not going to damage the menhaden stock all that much by continued heavy fishing. It seems to be in reasonably good shape,” said Ed Houde, a fisheries scientist with the University of Maryland Center for Environmental Science. “But what happens to the rest of the ecosystem? That’s the question mark.”

In November, the Atlantic States Marine Fisheries Commission, a panel of state fishery managers that regulates catches of migratory fish along the coast, will grapple with whether it should continue to manage menhaden as a single species — or begin considering its value to the ecosystem as well. Are there any big picture thinkers in the Atlantic States Marine Fisheries Commission?

The debate over menhaden comes amid rising concern over all forage fish, those small species that provide a critical link in the aquatic food chain by converting plankton into food for larger predator fish, birds, and mammals. Historically, forage species have received less attention — and protection from overfishing — than the larger predators, such as striped bass.

The 2014 Chesapeake Bay Watershed Agreement reflects that concern, calling for state and federal agencies to determine whether there are enough forage fish in the Bay to feed the growing populations of fish, osprey — even whales and dolphins — populating the estuary.

Ellen Pikitch, executive director of the Institute for Ocean Conservation Science at Stony Brook University in New York, said, “A species can look great under a single species approach, but it could be in terrible shape when you look at it in an ecosystem context.”